Moving merchandise may qualify as success, but not everyone was sold on sales figures as the salient metric.

Amazon declared its July 15 Prime Day sale a success before the day was through, an assertion that ran contrary to the sentiment evident on social media channels.

That counts for something.

Online commerce consultancy ChannelAdvisor echoed Amazon's assertions. In a blog post, Scot Wingo, executive chairman of ChannelAdvisor, said Amazon's sales for the day were up 93% in the US and 53% in Europe compared to last year. ChannelAdvisor's data comes from third-party merchants selling through Amazon.

Wingo said Prime Day fell short of Black Friday sales by 3% and reached only 60% of Cyber Monday sales. "By all measures, Amazon seems to have had a great first Prime Day," he said. "In the US they were able to have a day that was 4X the baseline growth and come very close to Black Friday volumes for third-party sellers. In the EU, there was also strong growth, but not quite as large as the US." 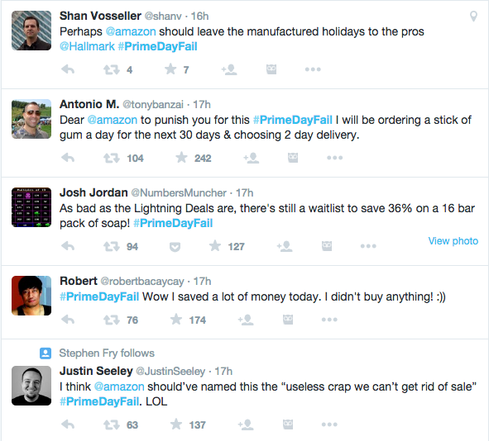 Moving merchandise may qualify as success, but not everyone was sold on sales figures as the salient metric. In Amazon's forums, posts expressing disappointment in Prime Day abound. On Twitter, the hashtag #primedayfail surged, accompanied by the sarcasm that powers the Web. Buzzfeed, ever attuned to the pulse of social media, assembled the obligatory list story: "25 Of The Best Responses To Amazon Prime Day."

A Diane Keaton T Shirt, with a 5 pack of brass knuckles AND ham?!?! DREAMS CAN COME TRUE #PrimeDayFail pic.twitter.com/hE1X6lhGb5

For disgruntled Amazon Prime members, and perhaps others, quality mattered more than quantity.

That's what happens when you're in an industry that deals with "content" at scale, rather than individual items and personal service. Algorithms can process and sell undifferentiated stuff efficiently but, so far, haven't shown that they can replace people when it comes to commerce.

As Twitter user Doug Davis observed, "@Amazon's algorithms are so advanced, I've been offered over 10,000 #PrimeDay deals and am not interested any of them."

Amazon used to refer to itself as the world's largest bookstore, but if you've ever visited a bookstore run by someone with a passion for books, you know it's a different experience. Prime Day turned out to be the world's biggest yard sale, without the personal touch. That counts for something, but it could have been so much better.

Thomas Claburn has been writing about business and technology since 1996, for publications such as New Architect, PC Computing, InformationWeek, Salon, Wired, and Ziff Davis Smart Business. Before that, he worked in film and television, having earned a not particularly useful ... View Full Bio
We welcome your comments on this topic on our social media channels, or [contact us directly] with questions about the site.
Comment  |
Email This  |
Print  |
RSS
More Insights
Webcasts
Making XDR Work in Your Enterprise - May 12
How the Rapid Shift to Remote Work Impacted IT Complexity and Post-Pandemic Security Priorities
More Webcasts
White Papers
Tech Insights: SASE's Pandemic Boost Likely to Stick
Improve your business with a Virtual CISO
More White Papers
Reports
The State of Endpoint Security
Immuta Data Engineering Survey: 2021 Impact Report
More Reports