Amazon's newly unveiled "Prime Air" 767 will help move customer freight faster and give the company yet another edge in the online retail market.

Amazon unveiled for the first time what its future fleet of package and freight-hauling airplanes will look like during an air show in Seattle on Aug. 5, according to the Seattle Times, GeekWire, and other new sources.

Amazon eventually plans to have 40 planes moving its freight between warehouses and certain distribution centers. Right now, it has 10 in operation.

However, this new aircraft, which would be the company's eleventh, was recently painted in what amounts to Amazon's colors.

It was given its colors in a hangar in New York, then flown under cover of darkness to Seattle-Tacoma International Airport to avoid the amateur plane spotters who hang around the airport's outskirts trying to identify the comings and goings of various aircraft.

One of them might have spilled the beans before the air show.

As the Seafair annual air show got underway last Friday, announcer Mark Christopher pointed out a whitish dot in the distance and asked what aircraft was making its maiden flight, according to GeekWire.

The answer was Amazon One, the first aircraft in a set of Boeing 767-300, wide-body planes that will be known as the Prime Air fleet. The fleet will display the company's name in big blue letters against a white background. 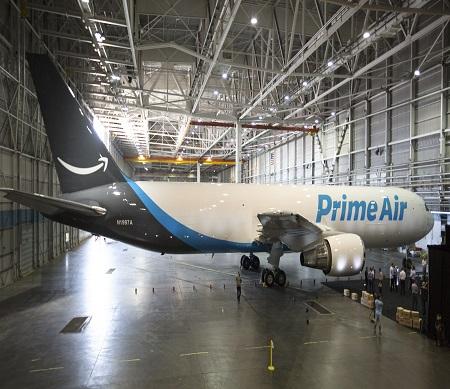 Placing "Prime Air" on the side of 767 fuselages is yet another way for Amazon to emphasize its focus on its growing body of Prime customers, who pay an annual $99 fee and enjoy free two-day delivery. Amazon already has a delivery truck fleet labeled Amazon Prime, and even prototype package-delivery drones that it's labeled Prime Air as well.

This YouTube video shows the Amazon One -- the lettering is small, beside the cockpit windows -- getting ready to takeoff for the Seafair event. It also shows the plane passing 500 feet over Lake Washington to introduce itself to thousands of spectators. If viewers were unsure what Prime Air was, the letters Amazon painted on the plane's belly provided a clue. The tail section also carried a large version of the Amazon smile logo.

Dominic Gates, aviation writer for The Seattle Times, pointed out that Amazon had had the plane's registry number with the Federal Aviation Administration changed to N1997A, since 1997 is the year that Amazon went public and also because 1997 is a prime number that can only be divided by itself or the number one.

Amazon will lobby to have all its aircraft registered with prime numbers, Gates wrote.

The existing fleet flies in and out of Wilmington, Ohio, at an airport constructed by the Clinton County Port Authority. The facility was built to accommodate a different prime customer, DHL, but DHL later moved to a new location, and then discontinued operations in the US.

To attract Amazon, the port authority added a new $14.6 million hangar to the facility, which was opened in mid-2014 by Gov. John Kasich, as InformationWeek related in December.

It appears the initial Prime Air fleet will be composed of used 767-300s that have been converted from former passenger airliners.

At least part of it will be operated by the Air Transport Services Group, an aviation holding company in Ohio, which runs the operation at Wilmington. The freshly painted plane is operated by Atlas Air in New York, which will also lease 767s to Amazon.

Amazon has an option to buy a part of each company.

[Want to see how Amazon laid the groundwork for its Prime fleet? Read Is Amazon Testing Its Own Package Delivery Airline?]

Amazon already uses FedEx, UPS, and DHL services, each of which operates its own aircraft.

However, Amazon is reportedly concerned about delays of deliveries, especially near the end-of-year holidays. Their systems have been overwhelmed by the volume that Amazon can generate at that time. Amazon took pains in its fourth-quarter earnings report in February to say it was not seeking to replace the overnight delivery services.

Dave Clark, senior vice president of Amazon worldwide operations, said at an Aug. 4 press conference in Seattle that Amazon did not plan to go into a competing package delivery service FedEx and UPS.

"Right now, everything going on those planes is inventory held in Amazon fulfillment centers and sold on the Amazon website. And we have more than enough package supply to utilize the 40 planes we've procured," he said, according to the Seattle Times.

But Amazon is also talking to Boeing about buying more 767s.

With a limited number available from passenger airline conversion, it may want new planes fresh from the manufacturing line. On March 6, Gates and Angel Gonzalez of The Seattle Times, citing unnamed sources, reported that Amazon was in talks with Boeing for six new 767-300s, which go for $70 to $80 million each.

Charles Babcock is an editor-at-large for InformationWeek and author of Management Strategies for the Cloud Revolution, a McGraw-Hill book. He is the former editor-in-chief of Digital News, former software editor of Computerworld and former technology editor of Interactive ... View Full Bio
We welcome your comments on this topic on our social media channels, or [contact us directly] with questions about the site.
Comment  |
Email This  |
Print  |
RSS
More Insights
Webcasts
Architecting Security for the Internet of Things
Defense and Response Against Insider Threats & User Errors
More Webcasts
White Papers
Democratizing Data Management With a Self-Service Portal
Practical Advice for Choosing Your First (or Next) SIEM
More White Papers
Reports
Special Report: Understanding Your Cyber Attackers
The Drive for Shift-Left Performance Testing
More Reports

It's quite cool that Amazon had the plane's registry number changed to the year that the company went public, which happens to be prime number. I also find it cool that Amazon wants all its aircrafts registered with prime numbers. It gives sense and meaning to Prime Air.