Apple is removing war games that feature the Confederate flag from its App Store. How does erasing digital media that contain images of a contextually relevant historical object improve social justice?

Now, before I get too far into criticizing Apple, let me say I support the removal of the Confederate flag from state houses and other public areas. I'm glad that retailers aren't selling it. It has clearly been used as a symbol of hatred by many.

The flag is also historically significant. And, within the context of depicting historical events, the flag needs to remain where its presence makes sense.

Instead, Apple simply axed Civil War games such as Ultimate General: Gettysburg. A search of Civil War games on iTunes seems to reveal a few stragglers. You can still find in iTunes a few low-popularity games that depict the Confederate flag. Most of the popular games from the genre no longer show up in iTunes search results. The company that makes Ultimate General has already posted that it heard from Apple that it needs to remove the flag. 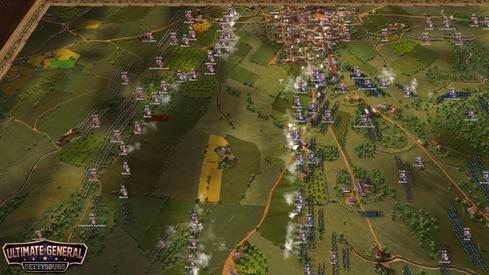 What's offensive about the use of the flag in a historical context? Unless you find the idea of re-enacting war in general to be offensive, re-enacting the Civil War, or World War II, or any other war with a historic viewpoint doesn't seem to me to be a problem. It's hard to imagine how game developers can execute such games without showing the historic symbols of the eras in which their games are based. Erasing the existence of a whole genre of digital media from the App Store because it depicts a contextually relevant historical object doesn't compute.

It's also curious that games seem to be the primary target for Apple. The company doesn't appear to be removing movies about the Civil War from the App Store. To my knowledge, you can still buy Ken Burns's The Civil War documentary TV series. Did Apple decide that movies and documentaries are art, and that computer games are not? That's an idea I find equally troubling.

Now, if someone created a game that featured the Confederate flag in a non-historical and violent context, I'd be all for its removal. I'd be happy if it stopped selling altogether. But the wholesale (or at least blunt-force) way Apple has done this hurts developers and gamers, but does nothing for social justice.

David has been writing on business and technology for over 10 years and was most recently Managing Editor at Enterpriseefficiency.com. Before that he was an Assistant Editor at MIT Sloan Management Review, where he covered a wide range of business topics including IT, ... View Full Bio
We welcome your comments on this topic on our social media channels, or [contact us directly] with questions about the site.
Comment  |
Email This  |
Print  |
RSS
More Insights
Webcasts
Nip Ransomware in the FUD: Detecting Attacks Pre-Encryption
Don't Miss This Cybersecurity Virtual Event
More Webcasts
White Papers
How to Build Your Incident Response Plan
A Business Case for Vulnerability Remediation Orchestration
More White Papers
Reports
The State of DevSecOps Report
Special Report: Edge Computing: An IT Platform for the New Enterprise
More Reports

@technocrati- Yes, you are right, you can't blame price on the reason not to do the right thing when you are the most profitable company in human history.
Reply  |  Post Message  |  Messages List  |  Start a Board

I agree with your stance here David, yet my issue with Apple is even more detailed. Why didn't they take a stance on this issue before nine were murdered in a place of worship ?  Claiming to be social sensative after the fact ?  It is as meaningless as their claim to promote minorities - still waiting to see someone other than a WASP in executive positions.   Wait for it, wait for it ......

My patience with Apple is fading, and while I enjoy my Mac laptop - the only product I own from Apple, I beginning to believe less and less in their purposed commitment to equality.

Apple functions like most any other American business, it is ok until it can affect potential sales. Their symbolic act ( no pun intended ) does not impress.

Apple is being overly politically correct. It's a firm that lives in the rarifed air of Silicon Valley, which according to my reading was not a part of the War Between the States.

What other games have Confederate flags in the world OUTSIDE of Apple? Must be others. Anything to do with the Civil War would have them, and should keep them. Are there commerically popular, and acceptable, WWII games which have Nazi symbols? Or pictures of Lenin? Same deal. Although we've been good at watering down the past lately, maybe this shows how far we've gone.

As for the current dilemma, it's a matter of educating kids and others as to why the current display of that flag offends and alarms some (most?) people. But Silicon Valley is about as far as you can get from South Carolina. So, it's going to be a bit of a slog up that hill.

@stefenjobs- Wow, i don't think you read the article carefully. I absolutely support the banning of the confederate flag in most cisrcumstances. Root is not "my boy" in any way. I state that clearly in the second paragraph.

But the idea of removing a game about the Civil War from sale is a different thing than banning it from a t-shirt or from flying over a government building. I wouldn't ban pictures of it in a museum. i wouldn't ban it from a movie. Games teach us abbout our history just like those things. We don't ignore history, we learn from it.
Reply  |  Post Message  |  Messages List  |  Start a Board

If your boy Roof hadn't been shown waving some damn Confederate flag and then gunning down innocent citizens, this banning of the Confederate flag from games nonsense wouldn't have happened.  It's obvious no one close to you was killed so you can take a nice comfortable view of the situation.  However, more sensitive people feel they have a need to do something even if it is futile or doesn't make much sense to you.  I think they're trying to defuse a bad situation.  Any fool knows that displaying a Confederate flag isn't hurting anyone but now they suddenly see some connection between the Confederate flag and racial killings and for the time being it has to be shown that people care about what happened.  I would think Apple might have received some heat to pull those apps or they simply went along with other companies out of respect for the murdered victims.  When it comes to human emotions, things don't have to compute, as you put it.  Not all humans are as rational as you are.  Their feelings tend to get in the way of their judgment.  They're not machines, precisely weighing out every little factor.  In this situation, not everyone can be pleased.

I'm sure in the future you'll be able to pull out your Confederate flag and display it proudly like your forefathers did but for now you'll just have to be patient until things cool down.  I'm a Northerner so I never waved a Confederate flag and it means almost nothing to me if it's removed.  I just view it as some old flag of a long-dead Confederacy.  I never met anyone from the times of the Civil War, so it's hard for me to relate to it.  I only know a lot of mostly innocent and possibly related people got killed on both sides.  I hate wars more than I hate flags.  I suppose developers aren't happy about having their games pulled but they'll just have to bear with it.  Most likely, they'll survive.  They can make up their own flag to put in place of the Confederate flag.
Reply  |  Post Message  |  Messages List  |  Start a Board

It's all about context and intention. Blanket removals of anything, be it words of symbols, are silly as it discounts their subtleties and nuances. The swastika for example, as a meaning far beyond that of the Nazi symbol it was adopted for.

The same should be the same for the confederate flag. If it's being used to promote hatred, that's not on, but in historical contexts, it's ridiculous to remote it. You can't sweet history under the rug.