World-famous architects are turning their attention to eye-catching, high-tech headquarters for some of the biggest names in the tech industry. From Apple, to Facebook, to Amazon, here are our 10 favorites. 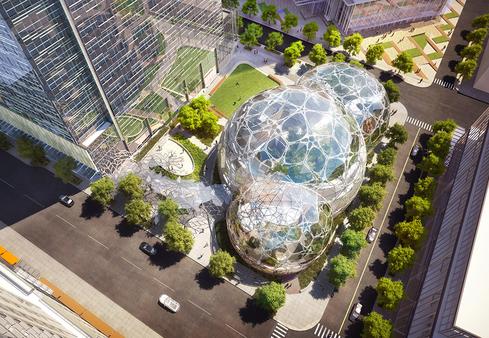 Businesses such as Facebook, Uber, and Amazon are better known for their ubiquitous presence in our lives than for any particular grace in design aesthetics. How many times have we all complained about Facebook's umpteenth change for the better? However, when it comes to corporate headquarters, these companies, and many others, are employing the best and the brightest in the fields of architecture and interior design.

We've come a long way from Microsoft's bland, boxy campus outside Seattle. Instead, in the city's downtown, Amazon looks to be taking a page from Logan's Run with a series of steel and glass domes that look more like futuristic biospheres than they do offices for an online retail giant.

Meanwhile, in Cupertino, Calif., Apple, perhaps the only company on this list known best for the sleek, high-fashion design of its products, is building an enormous, ring-shaped HQ designed by British architect Norman Foster. It calls to mind a giant silver spaceship that landed in a forest.

On the other side of the world, in the coastal city of Changle, China, Liu Dejian, one of that nation's wealthiest individuals and the founder of online game developer NetDragon Websoft, took his Star Trek fandom to the ultimate level by spending $100 million on an office HQ resembling the USS Enterprise spaceship.

The concept of a landmark headquarters for a major corporation is nothing new, and neither is the process of hiring a name-brand architect to design one. Frank Gehry, probably the best-known architect working today, designed Facebook's new campus, and the IAC center in New York City, which was his first building in the nation's largest city.

Other headquarters are less conspicuous but equally innovative and alluring. Airbnb's San Francisco headquarters boasts a soaring atrium with a living wall, for example.

Take a tour of some of the world's most impressive tech headquarters and tells us what you think -- terrific or tacky -- in the comments section below.

Google's & Mindshare's office in London are the worst of the 10 designs. Less sunshine inside, missing any innovative design aspects, not pleasant to look at from outside. I wonder how Google settle for such a clumsy design. There are such architects like Norman in the UK who could have done a much better job. The lack of options in London may be a reason
Reply  |  Post Message  |  Messages List  |  Start a Board

At least Google is using existing space and existing buildings as a foundation for their future design. Sometimes I wonder if it make sense financially and/or environmentally to build something new and innovative where there wasn't something before. It's not like the old buildings are removed and the land turned back into green space.
Reply  |  Post Message  |  Messages List  |  Start a Board

Apple, and NetDragon's spaceships are my favorites.

I am looking forward to Amazon's  bubble - probably it will be another landmark of downtown Seattle. Now in Seattle downtown, there are dozens of Amazon buildings but it's hard to differentiate between them - all of them look very similar to each other.
Reply  |  Post Message  |  Messages List  |  Start a Board

outside the tech industry there have also been some really great corporate headquarters--take a look at kevin roche's ford foundation building in manhattan or the Johnson Wax building by frank lloyd wright!
Reply  |  Post Message  |  Messages List  |  Start a Board

@jastroff Good point, the architects seem to only be concerned with making a statement and not with meshing with their surroundings.
Reply  |  Post Message  |  Messages List  |  Start a Board

All of them seem to be some vision out of a movie of what the future looks like. Maybe the insides make the difference. Would like to see how they are structured inside, and how work will change. I am sad, however, that Google is going to turn a part of lovely London into a junky looking multi-colored toybox
Reply  |  Post Message  |  Messages List  |  Start a Board