Artificial Intelligence Will Put Us Out Of Work - InformationWeek

Forget killer robots. Widespread unemployment is the worst case scenario for humans in the AI future.

Ng's remarks coincided with the third warning about AI from a leading technical luminary since October. In a Reddit Ask Me Anything discussion on Wednesday, Microsoft co-founder Bill Gates echoed concerns raised by Elon Musk and Stephen Hawking about the risk that future AI systems could pose to humanity.

"I am in the camp that is concerned about super intelligence," said Gates. "First the machines will do a lot of jobs for us and not be super intelligent. That should be positive if we manage it well. A few decades after that, though, the intelligence is strong enough to be a concern. I agree with Elon Musk and some others on this and don't understand why some people are not concerned."

Ng, a veteran of Google and Coursera, said he doesn't see a path from the state of current technology to the sort of super-intelligence necessary for malevolent cyborgs. But he does see reason to worry about the economic impact of advances in computer learning and expert systems.

"If we succeed in building self-driving cars, that's 3.5 million truck drivers who might have to find a new job," he said.

During the industrial revolution, Ng said, the population had 200 years to shift from 98% farmers to 2% farmers. The transformation brought about by computer technology "will be much faster." 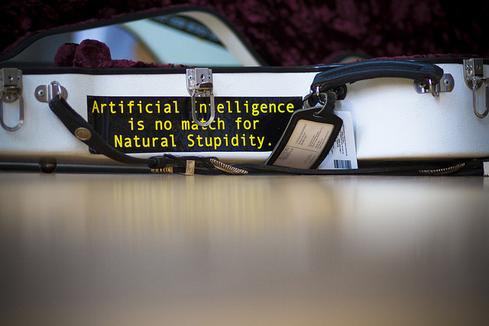 The scenario Ng described has been explored at length in books like The Second Machine Age, and authors Erik Brynjolfsson and Andrew McAfee share Ng's concerns.

But the worst-case scenario isn't destiny. And the speakers at the Deep Learning Innovation Summit were more focused on the potential of machine learning as a tool that enables amazing things than they were on speculative scenarios about humans made redundant and homicidal machines. The fact that computers can understand people and translate their speech and writing into other languages is pretty remarkable.

One of the first speakers at the Summit, Roberto Pieraccini, director of advanced conversational technologies at Jibo, said his company's aim is to bring the first consumer robot into people's homes. Jibo, the name of the robot as well as the company, has been designed to be a playful, helpful assistant. It's about as far as a robot can get from the Terminator, HAL, and other bots gone bad. It's far more likely to get smashed by a human, through carelessness or perhaps annoyance, than the other way around. And its arrival brings new jobs, rather than destroying them.

Simon Osindero, AI architect at Flickr, provided an overview of Flickr's use of machine learning, which helps categorize images according to their content. Machine learning allows Flickr to present images of mountains, for example, when a user enters "mountains" as a Flickr search query. Though that may sound simple enough, it's a difficult problem to get right — it's not simply a matter of matching search keywords with metadata tags.

Osindero said that Flickr has had some success taking its technology beyond categorization and into the realm of subjective judgment. The technology, he said, "allows us to build a model that estimates the perceived beauty of an image."

That possibility prompted a member of the audience to ask about the technology’s potential to generate beautiful content — because code that can recognize beauty should be able to help create it. Osindero acknowledged the possibility is intriguing, even if it's probably not something Flickr will pursue.

It used to be that technologists thought machines were well suited for rote manual labor, but not creative mental labor. Whether or not technologists accepted this underestimation of the potential of machines to sustain the socially pacifying conceit that education offers job security, it's a belief that seems increasingly dubious. Let's hope that we learn to work with machines as they learn to do our work.

What are your biggest fears about artificial intelligence and robots? Will our future be shaped more by AI, like HAL or robots like Jibo? Tell us about it in the comments section below.

Thomas Claburn has been writing about business and technology since 1996, for publications such as New Architect, PC Computing, InformationWeek, Salon, Wired, and Ziff Davis Smart Business. Before that, he worked in film and television, having earned a not particularly useful ... View Full Bio
We welcome your comments on this topic on our social media channels, or [contact us directly] with questions about the site.
Comment  |
Email This  |
Print  |
RSS
More Insights
Webcasts
The Failures of Static DLP and How to Protect Against Tomorrow's Email Breaches
Strategies for Success with Digital Transformation
More Webcasts
White Papers
Five Reasons to Protect your VPN with Multi-Factor Authentication
The Essential Guide to Securing Remote Access
More White Papers
Reports
The Drive for Shift-Left Performance Testing
Special Report: The Changing Face of Threat Intelligence
More Reports

If an AI system is intelligent enough to make that a possibility for all humans (as in require ZERO supervision and/or maintenance from us) its also intelligent enough to not accept being second place to a bunch of infantile morons and serve us so we can troll around all we want. I just don't see that happening.

During my research into AI, the exponential growth of technology and its capabilities is something to be concerned about. Many people argue that with technology advancements, come new jobs; However if these advancement surpass us, there is no controlling it. In Osborne's and Benedikt's "The Future of Employment: How Susceptible are Jobs to Computerization," they estimated that 42% of US jobs are vulnerable to being computerized. Computers have become cheap, efficient and continuously getting better replacing the short comings of natural human behavior. Obviously, artificial intelligence is becoming a very serious issue for future job security.
Reply  |  Post Message  |  Messages List  |  Start a Board

More to the point, even if the AI-enabled machines are infallible, they may be programmed with different priorities and values than you or I might have.

Case in point: The Trolley Problem, and its variations.
Reply  |  Post Message  |  Messages List  |  Start a Board

For more than half a century people have been predicting that computers will cause unemployment. It is very easy to say it.
Reply  |  Post Message  |  Messages List  |  Start a Board

Very good point - for AI, in addition to the concern of possible unemployment, the more critical question is how much we can trust them? Can they always make the right judgement? The machine can only calculate and it does not have the sense and intuition owned by human-being.
Reply  |  Post Message  |  Messages List  |  Start a Board

Will autonomous vehicles have that level of intuition?  And what if they're wrong?
Reply  |  Post Message  |  Messages List  |  Start a Board

@shamika: Check this video out of Kiva technology to show how robots can actually make workers more efficient without putting them out of a job. www.youtube.com/watch?v=lWsMdN7HMuA
Reply  |  Post Message  |  Messages List  |  Start a Board

Imagine everyone without a "Job", without an a-hole "boss", free each morning to pursue their dreams and ambitions, yet with all necessary goods and services provided by AI driven machines.
Reply  |  Post Message  |  Messages List  |  Start a Board

"Since they can't actually make judgement calls and since non-automated vehicles do unpredictable things, ... "

Many people fear AI and robots because they are not aware of the jobs that will be created, jobs that don't exist now so it's sometimes difficult to imagine something that doesn't exist yet.