Artificial Leaf Might Be Key to Reversing Climate Change - InformationWeek

0%
Tweet
A new invention from CalTech could help reverse the effects of climate change.

Apple Watch Alternatives: 10 Gadgets The Company Should Have Made
(Click image for larger view and slideshow.)

Whenever I write a Geekend about climate change I know some eyes are going to roll and some people will stop reading. It is normal, because the problem is so big and daunting. But please don't look away this time. I am going to cover a technology that might arrest climate change without you having to do a darn thing. All you have to do is keep driving your car and using electricity and you will be helping the planet.

Before I tell you about this new magical invention, you need to understand something important. This year, the Earth passed a very frightening milestone. In 2007, it was predicted that if the Earth did not stop increasing CO2 emissions by 2015, we would pass a point of no return. Global temperatures would rise at least 2 degrees Celsius no later than 2100. We didn't stop that pace. In fact, we're on pace for a rise of perhaps as much as 4.8 degrees. This would cause rising ocean levels that would put many major cities underwater and cause catastrophic weather patterns. As the World Bank said in a report: "There is no certainty that adaptation to a 4°C world is possible."

At this point, major environmental disaster and the potential extinction of all people is inevitable in our children's (or at least our grandchildren's) lifetimes. The only way to change this is to go beyond simply flattening emissions to actually reducing them to pre-2010 levels or better. By 2050, we have to reduce emissions by 41%, to 72% below 2010 levels, in order to have a chance. Considering we haven't even come close to flat emissions year-on-year, how are we going to do that?

One solution is to build something called a carbon-negative power plant. Essentially, it is a power plant that creates fuel from the CO2 trapped in plants. The emissions from burning the CO2-rich plants are then captured and buried (it is called Carbon sequestration). Such plants aren't easy to build, and they're expensive, but studies show they can provide some relief. In fact, one study showed that just adding a couple of carbon-negative power plants to California, combined with an existing energy plan involving solar and wind, could reduce emissions by 148% below 1990 levels.

There's another technology that is a little farther away from happening that might be the real answer though: The artificial leaf. I wrote briefly about an artificial leaf in August 2014 that would help astronauts with oxygen. This leaf is even better, though it looks less like a leaf than that version does. It carries out actual artificial photosynthesis. 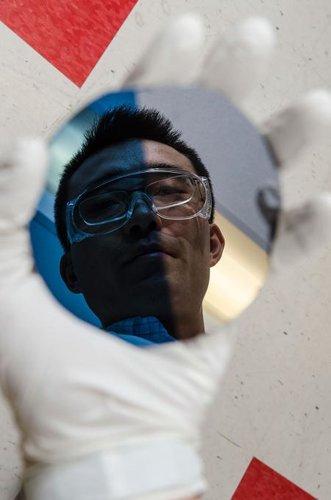 Created at CalTech, this artificial leaf, also known as a solar-fuel generator, takes CO2, sunlight, and water and creates oxygen and hydrogen. Hydrogen can easily be used to power cars or power plants. The reason we stopped trying to make hydrogen fuel cell vehicles is that hydrogen itself takes quite a lot of cost and energy to create. Using current technologies, it is an emissions wash at best, compared with traditional gasoline-fueled vehicles.

But here's the thing. An artificial leaf takes CO2 out of the air. It then creates a ready source of fuel, which can be burned without emissions. The only emission from burning hydrogen is water. That's a CO2 negative power plant. The more sunlight you turn into energy, the more CO2 you are sucking out of the air. It is like planting more trees without needing to take up the space.

So what's the catch? Well, as usual, it is making the thing on an industrial scale. In a prepared statement, Prof. Nate Lewis, one of the inventors of the CalTech leaf, says it exhibits, "record efficiency, stability, and effectiveness, and in a system that is intrinsically safe." If the technology can be perfected at the right price, you may someday be driving around in vehicles powered by hydrogen created by the sun.

Of course, regular solar power is always going to be cheaper because it has a decades-long head start. It is part of the equation. The problem with solar at this point is that it isn't carbon negative. Yes, we could go a long way if we could turn 100% of our energy production to solar. But the carbon is already in the air.

This technology, or something like it, could allow us to restore carbon emissions to pre-industrial levels without changing lifestyles. We wouldn't be asking anyone to recycle or skimp on anything. Getting people to change lifestyles is the hardest part of the environmental equation. That's literally a solution we all could live with.

David has been writing on business and technology for over 10 years and was most recently Managing Editor at Enterpriseefficiency.com. Before that he was an Assistant Editor at MIT Sloan Management Review, where he covered a wide range of business topics including IT, ... View Full Bio
We welcome your comments on this topic on our social media channels, or [contact us directly] with questions about the site.
Comment  |
Email This  |
Print  |
RSS
More Insights
Webcasts
Building & Managing the Next-Gen SOC
Thinking Like an Attacker: Strategies for Defense
More Webcasts
White Papers
3 Reasons Why Your Remote Workforce is Vulnerable
Global Application and Network Security Report
More White Papers
Reports
State of Endpoint Security: How Enterprises Are Managing Endpoint Security Threats
An Insider's View into a Supply Chain Attack
More Reports

Hydrogen for fuel, oxygen to breathe and left with carbon ready for making nanotubes and whatnot. Pretty nice bit of work. After reading the latest on Global climate change where the glacial ice measuring kilometers thick is sheeting off into the ocean and is predicted to cause sea level rise in the next hundred years that could swallow a decent chunk of U.S. coastline, this is a glimmer of hope that we can defend ourselves from ourselves.
Reply  |  Post Message  |  Messages List  |  Start a Board

@anon- Quoting from the press release. "The development could help lead to safe, efficient artificial photosynthetic systems—also called solar-fuel generators or "artificial leaves"—that replicate the natural process of photosynthesis that plants use to convert sunlight, water, and carbon dioxide into oxygen and fuel in the form of carbohydrates, or sugars."

That is the final goal though they are not there yet.
Reply  |  Post Message  |  Messages List  |  Start a Board

@W_albany- The same place it does when a plant does the same thing. It is chemically altered. I don't have room in an article this size to explain the basics of photosythnesis. But if you would like a quick and dirty review of artificial photosynthesis, you can find it here: http://en.wikipedia.org/wiki/Artificial_photosynthesis

Essentially, you're breaking up the carbon into a non-greenhouse gas. you have choices, based on the chemicals you use in the artificial leaf what it breaks down to. Carbon is not dangerous (it is the building block of organic life). It is CO2 specifically that is the problem. And only if you have it over a certain level.
Reply  |  Post Message  |  Messages List  |  Start a Board

This article is based on a Caltech press release (the link is in the article). That press release does not mention carbon at all. It says the device breaks water up into oxygen and hydrogen. As such, it's not clear that this is carbon negative at all.
Reply  |  Post Message  |  Messages List  |  Start a Board

*Occupywallstreet now does not even mention CO2 in its list of demands because of the bank-funded and corporate run carbon trading stock markets ruled by politicians.

We have such little smog now that "smog levels" no longer even measure smog; they measure conditions that "could" lead to being able to measure any smog. That's why "Alerts", "Advisories", "Watches" and "Be Kind to Air Days" are only predictions that smog "could be" measured within the next 36 hours. And if that happens its called a; "Smog Warning" or real smog. Now for a decade and a half we have had no real detectable or more accurately; "meaningful" smog levels at all.
Reply  |  Post Message  |  Messages List  |  Start a Board

The real tipping point will come when the oceans can no longer absorb CO2 and will then release it in a vast wave that will kill off most life on earth. You'll be way too dead to complaint then, why didn't anyone warn me?

Carbon fibers can be used in many things.  It makes materials very strong when woven and used to make composites. As such its use and generation would perhaps make economic sense.

I don't believe the fear mongering the global wamring crowd put out. The article repeats the mantra of us "reaching a point of no return in 2007" without disclosing that statement is based on self-serving computer models of the climate and not on real world data.

Indeed, Dr. Phil Jones of the UN's IPCC is on record as saying there has been no scientifically significant global warming in over 18 years and counting.

However, any developments that could possibly help ween us off foreign oil and energy resources would be a good thing. Ironic that such developments are forthcoming mostly from R&D and the private sector unrelated to the Jimmy Carter created Department of Energy and its waste of taxpayer dollars.

A nuclear / hydrogen based economy will hopefully be in our futures within 50 years.
Reply  |  Post Message  |  Messages List  |  Start a Board

"Created at CalTech, this artificial leaf, also known as a solar-fuel generator, takes CO2, sunlight, and water and creates oxygen and hydrogen."

So the inputs are CO2 and H2O, and the outputs are O2 ahd H2. What happens to the carbon?

The article needs to be revised to explain this. It is meaningless without this important point.

@Gary_El- You're quite right about the storage issue. And thanks for finding an apolitical way to point it out. I happen to believe climate change has been proven to be manmade, but I think the best thing about your comment is that people who disagree about something like this can still find a common ground. Common ground is what gets us through problems.
Reply  |  Post Message  |  Messages List  |  Start a Board
Page 1 / 2   >   >>
Editors' Choice
Hot Topics