50%
Tweet
Augmented reality is about to get compelling. Digital eyewear will make it happen. And it's happening sooner than you think.

Augmented reality got a bad rap a few years ago as a solution in search of a problem. Not too surprising, really, when you consider that the most common application thus far has been to animate characters on product packaging.

But that's starting to change. During the past 12 months, developers increasingly are releasing apps and hardware that go beyond gimmick to deliver compelling stuff -- like Ikea's app, which lets you place selected items from the 2014 catalogue around your house to see how they look. Or the tablet-based game from Lego that will pull in objects that kids build with Lego Fusion. Word Lens, an on-the-fly translation utility that Google bought earlier this year, is one of my favorites. Point it at a sign that's written in another language, and what you see on your phone is the same sign, only in your language. Same font and all. It's a big hit at airport bars if you feel like showing off for strangers while you wait for your plane.

Shifting from the fluffy to the useful is a move in the right direction for augmented reality, or AR. But it will be the next 12 months when the virtual rubber really starts to roll down reality road. The reason: Digital eyewear is coming of age, and the software that's being written to take advantage of it will, in time, make Word Lens seem about as hokey as the Jon-Bon-Jovi-walking-off-an-album-cover app.

[But what about security? Read The Security Skills Shortage No One Talks About.]

Several high-profile headsets are becoming available now, and developers are clamoring to write for them immersive apps to help us work, play, shop, and learn. A lot of those developers, in fact, will be at Uplinq, Qualcomm's developer forum, when it opens Thursday in San Francisco. Qualcomm's Vuforia is a leading AR engine and -- if last year is any indication -- will feature prominently in the program. 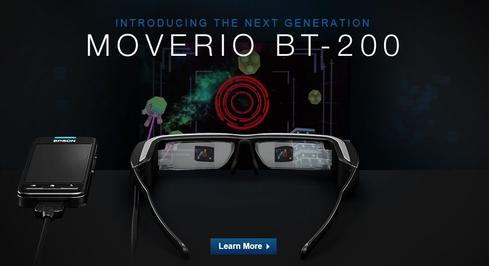 It's not hard to envision why the opportunity for AR headsets is so large. With tablets and smartphones, the AR environment that developers can create by weaving virtual elements into the real world extends only as far as the edge of the display. But with digital eyewear, it's all around you. Imagine the Ikea app, for example, with a headset instead of a smartphone. You'll be able to walk around, and see how the furniture from the catalogue looks in your house from all different angles. Imagine how effective a headset-based training app would be on a factory floor. Shopping apps that let you walk around a clothing catalogue like you might in a brick-and-mortar shop. Or a stroll-around app promoting a Caribbean resort.

Developers will still be creating animated packaging -- hopefully more smart than silly stuff. In fact, it's still the most popular application area for AR. But increasingly, we'll come to associate AR with smartphone and tablet apps that are more in the mold of the Ikea and Word Lens apps -- far more useful and engaging than animated versions of a toy on its box.

In the meantime, the shift to digital eyewear is underway. Samsung this month unveiled the Gear VR, which is a more portable version of the Oculus Rift headset (the Oculus eyewear connects to a PC while the Samsung device mates with the upcoming Galaxy Note 4 phablet). The Oculus offspring, which Samsung says is due out next month, is attracting game developers, though it's also piquing the interest of app writers in the AR space as well.

So is the Epson Moverio BT-200, which was released early this year. Unlike the Gear VR, which is targeted more at the virtual reality arena, the BT-200 is aimed squarely at developers of AR apps. The BT-200 looks more like a normal pair of glasses than the Gear VR, which is more of a high-tech dive mask. The BT-200 has a display embedded in the center of each lens, and it uses them to pull virtual elements into your real-world view.

More headsets are on the way. And the all-immersive apps that take advantage of them will follow. By this time next year, characters will still be jumping around on toy packages on store shelves. With any luck, we won't see it -- we'll be at home, checking out how a new TV would look in our living room.

Mike Feibus is principal analyst at TechKnowledge Strategies, a Scottsdale, Ariz., market strategy and analysis firm focusing on mobile ecosystems and client technologies. You can reach him at [email protected] View Full Bio
We welcome your comments on this topic on our social media channels, or [contact us directly] with questions about the site.
Comment  |
Email This  |
Print  |
RSS
More Insights
Webcasts
Enterprise Database Strategies for 2020
DevOps: Innovating with Speed, Security, and Quality
More Webcasts
White Papers
Container Security Best Practices: A How-To Guide
A Guide to the Iranian Threat Landscape
More White Papers
Reports
The Threat from the Internet--and What Your Organization Can Do About It
State of Endpoint Security: How Enterprises Are Managing Endpoint Security Threats
More Reports

Yeah, there are many compelling reasons for business to buy into AR headsets. No, consumers won't be snapping them up right away, but I don't think they'll need to. It will be in etailers' interest to get them resting on our noses. I can see a personal shopper approach working. Maybe an etailer pays a local 'personal e-shopper' to bring headsets to households so people can shop. Lorna: I'm sure the personal shopper will point out the 'slimming' outfits, even if the headset isn't up to it.

I'm starting to like this personal e-shopper idea. I'm going to go now and write the business plan. If it takes off on Kickstarter, then please consider this my last column! :-)
Reply  |  Post Message  |  Messages List  |  Start a Board

Walking around a clothing store is fine, but will the app tell me that a particular dress takes off 10 pounds? If so, there's a killer app.
Reply  |  Post Message  |  Messages List  |  Start a Board

The Ikea app sounds smart (and not silly) -- though it's bound to demotivate people from going to the brick and mortar stores. I agree the AR experience only really comes alive on smartglasses but more useful and compelling AR apps are needed to sell me -- or most consumers, I imagine -- on ever buying Google Glass or the Epson Moverio. I think for the time being, AR and smartglasses will be put to the test in enterprise scenarios like manufacturing, field service, and medical. it may be awhile before consumers buy in.
Reply  |  Post Message  |  Messages List  |  Start a Board
Editors' Choice
Hot Topics

More Informa Tech Live Events
DevOps: Innovating with Speed, Security, and QualityNow That Ransomware Has Gone Nuclear, How Can You Avoid Becoming the Next Victim?Why Performance Testing is More Critical Today