The stationary energy storage system deploys BMW's i3 vehicle batteries to help power a house after their first life in cars is over. Tesla Motors offers similar batter conversion technology.

Luxury German automaker BMW announced it would be integrating its i3 battery system into an energy storage solution for residential and commercial use -- in essence giving its used electric vehicle batteries a second life.

The battery storage system electrified by BMW i series technology can incorporate used BMW i3 batteries. It includes a voltage converter and capabilities to manage the energy flow between renewable energy sources, the house interface, and the high-voltage lithium-ion battery from the BMW i3 model.

Employing real-time energy readings, the system can measure available energy supply and demand, and make the necessary calculations to determine the optimal time to charge or discharge the system. 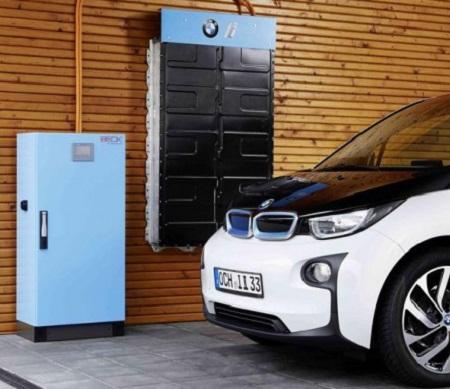 Cliff Fietzek, manager of connected eMobility at BMW of North America, wrote in a June 21 statement:

The remarkable advantage for BMW customers in using BMW i3 batteries as a plug and play storage application is the ability to tap into an alternative resource for residential and commercial backup power, thus using renewable energy much more efficiently, and enabling additional revenues from the energy market.

Users can deploy used batteries from the i3 without making any modifications. Owners can simply remove the battery from the vehicle when it needs to be replaced and insert it into the home power system.

Focusing on the sustainable nature of the system, the company noted that it's an ideal application for a retired BMW i3 batteries, ensuring that the repurposed unit will offer additional years of service.

Electric car rival Tesla Motors introduced a similar concept in May of last year called Powerwall, a home battery storage solution that charges using electricity generated from solar panels. It can keep a home powered when the sun goes down.

A typical Powerwall system includes solar panels, an inverter for converting electricity between direct current and alternating current, a meter for measuring battery charge, and, in backup applications, a secondary circuit that powers key appliances.

BMW has been investing robustly in the electric and autonomous vehicle space. The company plans to release an electric self-driving car in 2021 called the i NEXT that will serve as the company's flagship model.

In addition, BMW has been making strides towards autonomous vehicles during the past decade. In 2006, a company test vehicle autonomously completed a lap of the Hockenheimring racetrack.

However, the company faces a slew of competitors in the self-driving vehicle space, including German rivals Daimler and Porsche, and American manufacturers like Ford. Many Silicon Valley companies are also in the running, including Google, Tesla, and Apple.

For years, BMW has been working with a host of partners to increase energy efficiency. The company is currently is conducting a pilot study regarding the relationship between home electric vehicle (EV) charging and the energy grid. BWM is working on this with Pacific Gas and Electric Company (PG&E), which covers Northern and Central California.

Nathan Eddy is a freelance writer for InformationWeek. He has written for Popular Mechanics, Sales & Marketing Management Magazine, FierceMarkets, and CRN, among others. In 2012 he made his first documentary film, The Absent Column. He currently lives in Berlin. View Full Bio
We welcome your comments on this topic on our social media channels, or [contact us directly] with questions about the site.
Comment  |
Email This  |
Print  |
RSS
More Insights
Webcasts
4 Practical Tips for Building a Data Lake
Multi-Cloud Data Management for Modern Applications
More Webcasts
White Papers
Guide to Enabling 5G Deployments
Top Serverless Security Risks and How to Mitigate
More White Papers
Reports
[Report] 2021 State of IT & SecOps
Trustwave Global Security Report
More Reports