The race to market for electric, self-driving vehicles accelerates with BMW's plans to bring an autonomous car to market in 2021. The i NEXT will face competition from Tesla, Google, Porsche, and many others.

BMW plans to release an electric, self-driving car in 2021 called the i NEXT that will serve as the company's flagship model, according to comments released by company CEO Harald Krueger ahead of a shareholders meeting.

In his statement, Kreuger also noted that in a few weeks, BMW will offer an i3 with 50% more battery capacity. Later, in 2018, the German carmaker will launch an i8 Roadster. The automaker's i sub-brand currently includes the i3 EV and the i8 plug-in hybrid.

After that, the i NEXT will roll off the assembly line. As Krueger explained in his May 12 statement:

This will be followed in 2021 by the BMW i NEXT, our new innovation driver, with autonomous driving, digital connectivity, intelligent lightweight design, a totally new interior and ultimately bringing the next generation of electro-mobility to the road. It will be a while before these cars reach series maturity -- also because the proper legal framework for customers and manufacturers has not yet been decided.

BMW has been making strides towards autonomous vehicles during the past decade. In 2006, a company test vehicle autonomously completed a lap of the Hockenheimring racetrack. 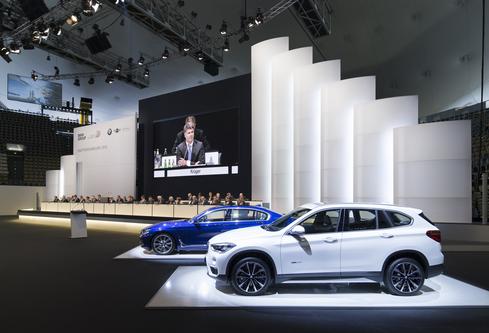 In 2011, a BMW drove on the A9 autobahn from Munich towards Nuremberg without any driver intervention.

"Our goal is already clearly-defined -- to be Number ONE in autonomous driving," Krueger wrote. "However, with us, the customer always decides -- because Sheer Driving Pleasure also means: freedom to choose. When do I hand over control? When do I drive myself?"

Kreuger also noted that 20% of the company's DriveNow car-sharing fleet is already electric, and that the program grew to almost 580,000 registered users in Europe by the end of 2015.

BMW recently launched ReachNow in the US, based on the DriveNow model. It got off to a strong start in Seattle with around 13,000 members registering in the first month alone.

The company is known for its precise engineering, luxury finishes, and attention to detail, but in a March interview with Reuters, conducted just days ahead of BMWs 100th birthday, company board member Klaus Froehlich said its cars must become smarter -- a sentiment repeated by Krueger.

Krueger highlighted enhanced connectivity and the use of artificial intelligence as key components of the company's car-building strategy, and noted that digitalization is a core element of BMW's plans.

In August 2015 Nokia sold its HERE maps business to a consortium of German automotive companies, including Audi, BMW, and Daimler for $3.2 billion. These companies plan to use the mapping technology to aid autonomous control systems.

BMW faces a slew of competitors in the self-driving vehicle space, including German rivals Daimler and Porsche, and American manufacturers like Ford. Many Silicon Valley companies are also in the running, including Google, Tesla, and Apple.

Meanwhile, Japanese auto giant Toyota is setting down roots in the heart of America's car manufacturing base, given the company's recent announcement that it's building a center for the development of autonomous vehicles.

Nathan Eddy is a freelance writer for InformationWeek. He has written for Popular Mechanics, Sales & Marketing Management Magazine, FierceMarkets, and CRN, among others. In 2012 he made his first documentary film, The Absent Column. He currently lives in Berlin. View Full Bio
We welcome your comments on this topic on our social media channels, or [contact us directly] with questions about the site.
Comment  |
Email This  |
Print  |
RSS
More Insights
Webcasts
Fintech at SaaS speed: Navigating the scale & security challenge
Bolstering Your Enterprise Cyber Risk Assessment
More Webcasts
White Papers
The State of Malware Threats
Why You're Wrong About Operationalizing AI
More White Papers
Reports
Gartner's Top 9 Security Trends in 2020
A Decade of Passive DNS
More Reports