CES 2015: Internet Of Things Not All Shiny - InformationWeek

Around 160,000 people have come to CES 2015 in Las Vegas to get a glimpse of a world where everything connects with everything else. What began as a trade show to showcase televisions, turntables, and other consumer gadgets has become a nexus for the exchange of data.

Connections allow the exchange of data. CES has always been about personal connections and business connections. But in the past few years, as mobile devices have become ubiquitous and cloud services have matured, it has shone a spotlight on the appeal of connecting devices, for device makers and possibly device buyers.

Our devices allow the interchange of data about people, about us. And such data turns out to be hugely valuable to companies that aspire to build ongoing relationships with customers. It allows companies to understand how their products are being used and to sell more products and services.

At Panasonic's media conference on Monday, Julie Bauer, president of Panasonic's consumer sales division, described her group's goal as "expanding touch-points with consumers." The company announced upcoming products including a line of TVs with a Firefox OS interface, a Home Monitoring & Control Kit with no monthly fee, and a virtual mirror that will help cosmetics companies offer makeup recommendations to clients.

Chris Allen, founder and CEO of iDevices, a maker of connected cooking thermometers and soon connected outlets, said that the most exciting aspect of the Internet of Things is "the analytics you can garner, the way you can service the customer and understand how the customer uses the product." 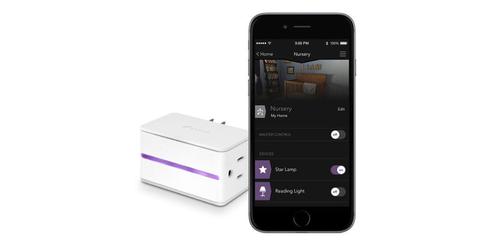 iDevices held its press conference with Schlage and Chamberlain. The presence of a 95-year-old lock company and a 61-year-old maker of garage door openers at a home automation-themed event attests to the fact that there's change in the air, that established industrial brands see an opportunity to redefine the scope of their business and the way they interact with customers.

Cory Sorice, VP of marketing for connected products and commerce at Chamberlain, observed that his company interacted with its customers about once every 15 years. That's how long the company's garage door openers generally last. But with Chamberlain's MyQ Garage, customer interactions become daily events through push notifications. And these interactions can be important: As Sorice put it, when you receive notification that your daughter came home through the garage at 3:00 a.m., or didn't, that matters. 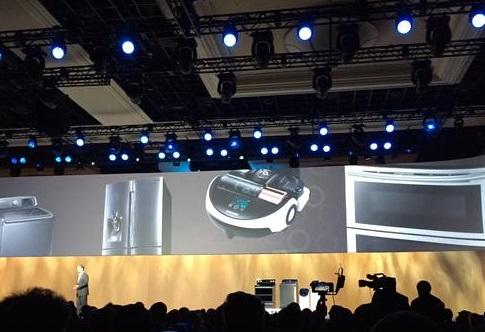 At Samsung's press conference, the Internet of Things was mentioned only in passing, because it was to be the subject of Samsung Electronics CEO Boo-Keun Yoon's keynote on Monday evening. Still, Tim Baxter, president and COO of Samsung Electronics USA, underscored his company's interest in the Internet of Things by citing Samsung's acquisition of Smart Things last summer. He also noted that roughly a third of Americans say they're interested in smart-home technology, but less than 2% have actually deployed it. "We believe this represents a huge opportunity for Samsung," he said.

Samsung didn't announce any noteworthy mobile products beyond a small, wireless 1-TB SSD, unless you consider its planned robotic vacuum, dubbed PowerBot, a mobile device. It announced that its cloud music and video services, Milk Music and Milk Video, will be coming to PCs and Samsung Smart TVs (which henceforth will run the Tizen operating system). It also announced Milk VR, to provide branded VR content to its Gear VR headset, and the UHD Alliance, a group of companies hoping to standardize the ultra-high definition TV ecosystem.

While introducing Phase II of the company's Chef Collection home appliances, Samsung Electronics USA VP John Herrington underscored the company's commitment to the Internet of Things. "Home appliances are now a major pillar for us, alongside mobile and TV," he said.

Every "thing" now is a technology product, though not necessarily a very compelling one. As iDevices' Allen remarked earlier in the day, "The consumer has to see true value. It can't just be an [Internet-enabled] on/off light switch."

Thomas Claburn has been writing about business and technology since 1996, for publications such as New Architect, PC Computing, InformationWeek, Salon, Wired, and Ziff Davis Smart Business. Before that, he worked in film and television, having earned a not particularly useful ... View Full Bio
We welcome your comments on this topic on our social media channels, or [contact us directly] with questions about the site.
Comment  |
Email This  |
Print  |
RSS
More Insights
Webcasts
Bolstering Your Enterprise Cyber Risk Assessment
Multi-Cloud Data Management for Modern Applications
More Webcasts
White Papers
Guide to Enabling 5G Deployments
Top Serverless Security Risks and How to Mitigate
More White Papers
Reports
2021 Email Threat Report
Gartner's Top 9 Security Trends in 2020
More Reports

In a learned post, Rafe Needleman asks why not connected baby diapers? Indeed, why not? An app could replace the mother's sensitive nose. https://www.yahoo.com/tech/the-6-most-ridiculous-connected-devices-except-107239764774.html
Reply  |  Post Message  |  Messages List  |  Start a Board

Everyone I know who has a vacuum robot feels a lot smarter, whether they are or not. What is it about vacuuming?
Reply  |  Post Message  |  Messages List  |  Start a Board

Right. I may replace a phone every couple of years, but a TV is a bigger investment. And my washer and fridge last the better part of a decade. Security standards are a major reason people are waiting....
Reply  |  Post Message  |  Messages List  |  Start a Board

I'm glad Tom emphasized the importance of usefullness in IoT home scenarios. If I'm going to drop serious money on a smart home device it better do more than collect my data and give nothing significant back. Consumers won't be easily fooled. We're accustomed to mobile apps, search engines, and services like Amazon and Netflix giving us relevant suggestions based on our data. Expectations are high for a good return on our investment in smart things.
Reply  |  Post Message  |  Messages List  |  Start a Board

I purchased a Samsung "Smart" 46-inch LED TV more than a year ago and am still waiting for signs of intelligence. The setup required me to share my email address and see it log in every time I turn the TV on. Part of the smartness was supposed to be learning my viewing habits and suggesting shows to watch on a startup page. I saw no signs that it was personalizing my experience and it just left me feeling like Samsung is selling data on consumer viewing habits.

I've reconfigured my startup to avoid the Samsung startup screen, but the system shows no way to unregister the TV and use it as a dumb appliance. That may not be doable, as I do need login-credentials to use streaming services from Amazon, Netflix, and other streaming apps that run on the TV.
Reply  |  Post Message  |  Messages List  |  Start a Board
InformationWeek Is Getting an Upgrade!