Tech's annual celebration of gadgets, robots, and connected everything kicks off soon in Vegas. Here's what will grab the spotlight at CES 2015. 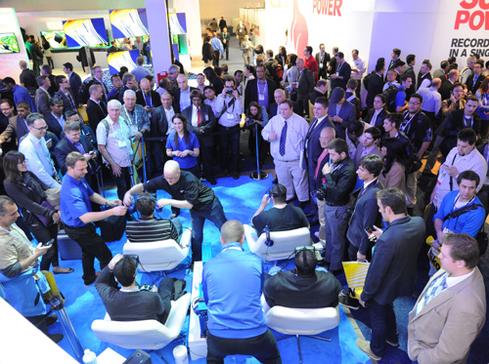 Here's a tip whether you're attending or just keeping tabs on the 2015 edition of the International Consumer Electronics Show in Las Vegas: Get used to the word "connected."

Connected this, connected that, connected everything. Heading into the tech industry's annual consumer fête in Sin City, it is the one word that best sums up the buzz. Think connected cars, connected homes, connected people, and the myriad connected devices those people carry, or, as might increasingly be the case, the myriad connected devices people wear. All of these technologies have made prior appearances at CES, but they'll take up even more of the desert air this year, from a self-parking BMW, to home automation advances, to the growing industry of developer frameworks such as Android Wear and Apple HomeKit.

Even as the line between consumer and business has blurred beyond recognition, CES is not meant to be an IT professional's paradise. (It is the Consumer Electronics Show, after all.) There are some conspicuous absences from an enterprise IT standpoint, and even from a consumer tech angle. You might hear plenty about the 2015 launch of Apple's iWatch, for example, but you won't actually find Apple there. There will be loads of Android devices on the exhibition floors, but don't expect a Google booth (though Google president of the Americas Margo Georgiadis will join other media executives on the Brand Matters keynote panel). Microsoft, once a CES stalwart, no longer attends in an official capacity. And although some of the biggest hardware players in mobile devices, such as Samsung, will be in Vegas, they probably will save at least some of their fireworks for Mobile World Congress in early March.

Still, CES remains an enormous international event with a start-of-the-year calendar placement that lends it extra juice. More than 160,000 people attended last year, including 6,600 members of the media and 3,600 exhibitors, who made 20,000 product announcements. Roughly one in four attendees was from outside the US.

As InformationWeek's Thomas Claburn recently reminded us, CES is always the Year of Something, for better or worse. Year of the Tablet? Sure. Year of the Ultrabook? That one didn't exactly pan out. You can place your own bets on 2015: Year of the TV Most Of Us Can't Afford doesn't exactly roll off the tongue. (Last year it was 4K; this year it could be 8K. Does that mean we can expect 16K in 2016?)

There are enough candidates from home automation, to virtual reality, to wearables, to, yes, incredibly big and expensive TVs that have become CES floor regulars that this year's CES is in danger of being known as Year of More of the Same. Then again, CES 2015 might be the Year of the Car; check out the keynote speakers. Sure, you've got your usual tech heavyweights including Samsung CEO Boo-Keun Yoon and Intel CEO Brian Krzanich, but they are joined this year by Mercedes-Benz chairman Dieter Zetsche and Ford Motor CEO Mark Fields.

Regardless of which technologies end up leaving Las Vegas with "Year of" status, there will be a common denominator: connectivity. From your phones, tablets, and PCs, to the lock on your home's door, to your car's dashboard, to your fashion accessories, these items will be connected to one another and to the Internet, at least if vendors have anything to do with it.

CES 2015 won't be the first time you'll hear terms like "connected car," "wearable," or any of the many alternatives and variations, but the volume and frequency might hit record highs. With any luck we'll see more evidence this year of how these technologies will move from toys of the rich and famous to mainstream realities with practical, everyday uses.

Read on for eight trends and technologies -- all with the common thread of connectivity -- that are likely to dominate the CES 2015 conversation.

@Li Tan there are wearables that build sensors into actual shirts and hats. Those are typically used for medical and safety monitoring, so they are not quite the same as smartwatches or even Google glasses.
Reply  |  Post Message  |  Messages List  |  Start a Board

I'm hoping that CES provides more clarity on smartwatches. It's a market with so much potential, but it's still not breaking through with consumers. I had a chance to play around with Galaxy Gear 2 watch recently and it's really useful and fun. It keeps the phone in the pocket, and we can all agree that's probably a good thing. It may indeed take the Apple Watch release to move the dial on smartwatches, but CES could be a good teaser for the market in general.

But ultimately, I think most folks will walk away from CES 2015 talking about the connected car and home, two exciting trends as well.
Reply  |  Post Message  |  Messages List  |  Start a Board

Based on my social feeds, the CES buzz is auto tech so far.
Reply  |  Post Message  |  Messages List  |  Start a Board
InformationWeek Is Getting an Upgrade!