Will 2015 be the Year of the Outrageously Expensive TV, or just another Year of Incremental Improvements in Technology?

With the imminent opening of the International CES 2015 exhibition in Las Vegas on Jan. 6, it's time to ask, "What year is it?"

CES years always have a title, bestowed by vendors, analysts, bloggers, journalists, and anyone with an opinion. 2010 was Year of the E-Reader or Year of the Connected Living Room, depending on whom you asked. It was Year of the Tablet in 2011, or Year of the 3D TV That No One Wanted. The following year, 2012, was either Year of the Ultrabook or the Year of Wishful Thinking, because few ultrabooks actually sold.

CES 2015 could be the Year of the 8K TV, for the 1% who can afford them. LG is expected to unveil a 55-inch 8K display with a resolution of 7,680 by 4,320 pixels. This extremely vivid TV doesn't have a name yet. (Its 4K ancestors are sometimes referred to as "4K Ultra HD TVs" by those who lack the confidence to use "4K Ultra Super Mega Hyper Uber Very Extreme HD TV.")

With robotics exhibits up 25% from last year, it might be fair to call 2015 the Year of the Robot. The only problem is that real robots are rudimentary compared to the way they're depicted in the media. Short of some unforeseen breakthrough, it will be a Year of Disappointing Robots. 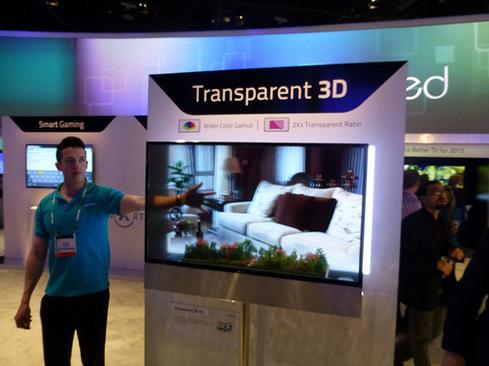 What shiny new technology will be crowned at the 2015 Consumer Electronics Show?
(Image:

Jordan Edelson, founder and CEO of Appetizer Mobile, an app design agency, said in a phone interview that he expected it would be the Year of Home Automation. A lot of the electronics coming out, he said, will be designed to connect to smartphones, through frameworks such as HomeKit, CarPlay, and Android Auto.

"Your mobile phone knows everything about you," said Edelson. "Everything you do goes through that phone now."

Edelson expects plenty of VR-related announcements from the likes of Sony and Facebook's Oculus VR. In mid-December, Google created a section in Google Play for apps that support Cardboard VR, the company's phone-powered cardboard VR mask. And in September, Samsung introduced its own VR headset, Gear VR.

Edelson argues that TV advances are overhyped. Pointing to LG's rumored 8K TV, he said, it risks becoming ridiculous because your eye can't tell the difference after a certain point. Also, there is not enough 4K, let alone 8K, content available to watch.

Automotive technology certainly will be featured at CES, though Edelson believes the industry needs to improve the user experience and to teach people how to give verbal commands to vehicles. "I still see people shouting at their car to call a friend and the vehicle not responding," he said, noting that automated systems in cars have to prove themselves before people will trust them.

Ultimately, 2015 will be the Year of Incremental Improvements in Technology, just like every year before it. But as CES approaches, it also will be the Year of Great Expectations, in which anything is possible. Keep hoping for that flying car. You never know.

Thomas Claburn has been writing about business and technology since 1996, for publications such as New Architect, PC Computing, InformationWeek, Salon, Wired, and Ziff Davis Smart Business. Before that, he worked in film and television, having earned a not particularly useful ... View Full Bio
We welcome your comments on this topic on our social media channels, or [contact us directly] with questions about the site.
Comment  |
Email This  |
Print  |
RSS
More Insights
Webcasts
Securing and Monitoring Networks in the 'New Normal'
The Failures of Static DLP and How to Protect Against Tomorrow's Email Breaches
More Webcasts
White Papers
Eliminate East-West Traffic Hair-Pinning
From MFA to Zero Trust
More White Papers
Reports
The State of Cloud Computing - Fall 2020
Special Report: Understanding Your Cyber Attackers
More Reports

I would like to say up front that I don't get any money from this, but the flying car is already here. It's called the AeroMobil 3.0.
I saw a video and pics of it and it does fly. It looks pretty amazing in and out.
I'm not sure the Year Of What will be, but I'm always anxious and excited to see what's new on CES. Like a child on Christmas eve.
Reply  |  Post Message  |  Messages List  |  Start a Board

Trying to wrap my mind around an 8K TV. I have a 55 inch led 3d hd etc in my house and at no time did ever tell my husband he was allowed to spend 8K on a TV. Past a certain resolution, what benefit can increasing it really do? I can already see each indivudual blade of grass Barcelona plays on as Messi scores a goal. I truly hope it becomes the year of dissapointing robots or of the next new wearble instead of the year of expensive and not even incrementally better TV's.

And I love the idea of the flying car, except that other people might be driving them. (I know too many people that have problems with right and left to trust them with up and down too.)
Reply  |  Post Message  |  Messages List  |  Start a Board

Simple: yet another year of tech journalists and analysts arguing what this is the year of.
Reply  |  Post Message  |  Messages List  |  Start a Board