0%
Tweet
In the first test of its kind, engineers from Delphi equipped an Audi vehicle nicknamed "Roadrunner" with enough technology to get the SUV from California to New York without a driver.

Automotive technology specialist Delphi is detailing how it has completed the first successful coast-to-coast trip by an automated vehicle, an Audi Q4 SUV nicknamed "Roadrunner," which drove from Treasure Island in San Francisco to New York -- a distance of nearly 3,400 miles.

Delphi officials said the vehicle was in fully automated mode for 99% of the drive -- a test which engineers plans to study and research. Company testers also plan to collect information that will help further advance active safety technology.

The nine-day trip, which crossed 15 states and Washington, D.C., was planned to expose the technology to complex driving situations such as traffic circles, bridges, tunnels, construction zones, a variety of weather conditions, and of course, aggressive drivers. 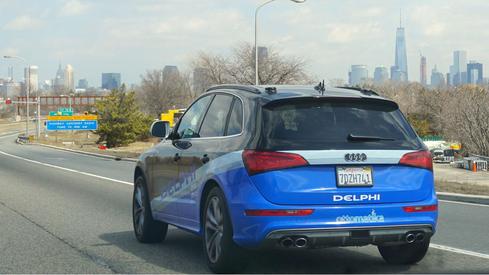 The Audi Roadrunner is also equipped with wireless vehicle communication technology that extends the range of existing ADAS functionality, and intelligent software that enables the vehicle to make complex, human-like decisions for real-world automated driving.

Cars that currently require human piloting, such as the 2013 Cadillac ATS, also use ADAS technologies, such as a vibrating seat warning that alerts the driver if the car is drifting out of its lane.

Active safety technologies also enable the vehicle to make decisions like stopping and then proceeding at a four-way stop, timing a highway merge, or calculating the safest maneuver around a bicyclist on a city street.

Some of the technology used for the journey is the result of a partnership with Ottomatika, a company started by Carnegie Mellon University, which provides advanced automated driving software, including support for vehicle-to-environment (V2X) communications.

Delphi's research team will now dive into the mountain of data it collected on the trip -- 3TB of information, equal to about 30% of all of the printed material in the Library of Congress, as the company pointed out.

For those interested in a less data-intensive overview of the journey, Delphi has made nine videos, one for each day of the drive, available on YouTube.

[Read about the DARPA robotics challenge.]

"Our vehicle performed remarkably well during this drive, exceeding our expectations," Jeff Owens, Delphi's chief technology officer, wrote in an April 2 statement. "The knowledge obtained from this trip will help optimize our existing active safety products and accelerate our future product development, which will allow us to deliver unsurpassed automotive grade technologies to our customers."

Way back in 2012, Nevada took the nation one step closer to a future without the need of direct human control by approving Google's license to test a driverless Toyota Prius on its roads -- the first such license issued in the United States under new laws and regulations.

Despite advances in technology, a March survey of 2,276 US adults conducted by Harris suggest drivers are wary of driverless cars and the technology behind them.

While they do score points for being futuristic -- almost one quarter of adults (24%) believe self-driving vehicles are something out of The Jetsons cartoons -- a whopping 80% of Americans feel computer "glitches" are a likely downfall of self-driving vehicles, and 12% admitted they're simply "confusing."

Nathan Eddy is a freelance writer for InformationWeek. He has written for Popular Mechanics, Sales & Marketing Management Magazine, FierceMarkets, and CRN, among others. In 2012 he made his first documentary film, The Absent Column. He currently lives in Berlin. View Full Bio
We welcome your comments on this topic on our social media channels, or [contact us directly] with questions about the site.
Comment  |
Email This  |
Print  |
RSS
More Insights
Webcasts
Enterprise Database Strategies for 2020
Making Zero-Trust Work for Work From Home
More Webcasts
White Papers
[Comparison Guide] Wired vs. Wireless LAN Solution
Protect Your Brand, Mitigate Fraud and Defend Your Domain
More White Papers
Reports
How Remote Network Management Keeps the Business Running
Annual Threat Intelligence Report: Perspectives and Predictions
More Reports

Here it is written that Delphi has developed a car which does not require a driver to go on roads. For examination the car went for around 3,400 miles covering many states. It was done to see if it could drive in traffic ,through tunnels,construction, and rash drivers etc. They found out that it could drive itself most of the time. Thus i think it is a very unique and nice concept.
Reply  |  Post Message  |  Messages List  |  Start a Board


I think the first step towards driverless cars involves augmented driving, like the vibrating seat example in this article.


Drivers can use all the help they can get – roads can be dangerous. I think we're going to see a bridge period between augmented driving, autopilot then completely driverless – it's a generational thing that's just going to take time to develop.

IT Career Paths You May Not Have Considered Lisa Morgan, Freelance Writer,  6/30/2020
White Papers
[Comparison Guide] Wired vs. Wireless LAN Solution
6 Misconceptions About Collective Defense for Cybersecurity
Case Study: Tackling the Challenge Of Non-Employee Management
Online Traffic & Cyber Attacks During COVID-19
WFH Is Dead. Long live WFA. But What Does that Mean for IT?