Disney's Tomorrowland Past And Present: A Celebration - InformationWeek

7 comments
Comment Now
Disneyland begins the celebration of its 60th anniversary today and the new movie Tomorrowland also debuts. We celebrate 60 years of the future. 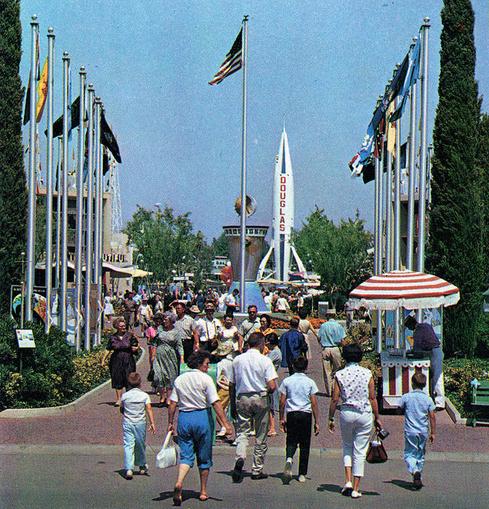 One of the funniest things about Tomorrowland is watching how the colors of the future changed. Early Tomorrowland was very white.

@zerox203- I'm a sucker for the "old, burned out genius has his spark rekindled by young genius who needs his the old dude's help to learn how to harness their genius." So for me it doesn't look like a stinker. For babysitting reasons I haven't gotten a chance to see it yet, but I I feel like I've never seena  George Clooney movie that was boring. :)
Reply  |  Post Message  |  Messages List  |  Start a Board

@kstaron- the fantastic thing about youtube is that you can now pretty much pick a year and find someone's home movies of tomorrowland. If I were  abetter video editor, I bet i could use youtube to make some sort of time lapse video of tomorrowland changing year to year.
Reply  |  Post Message  |  Messages List  |  Start a Board

It's amazing how much futurists of the 50's got right (and how much they got wrong). One of the things I like about Disney is they aim for that kind of vision, of seeing what the future could hold. I wish I could have spent more time in tomorrowland on my first and only trip to Disney. While some of the ideas are severely dated, it still functions as a showcase of possibility.
Reply  |  Post Message  |  Messages List  |  Start a Board

I've been to Disney World, just once, when I was barely old enough to understand or remember anything. I don't know if I went to Tomorrowland (I assume I did); some of what's here looks familiar. I do remember being surprised at the huge variety of shows, attractions, and landscapes. Documentaries about nature and society, museum-like experiences, all kinds of wacky fun, and yes, visions of the future. I had thought it was all going to be based on Disney movies! Just sitting around and eating or waiting in line was an experience. those metal trees, for example, apparently open and close with the rising and setting of the sun! It's definitely the most magical place on earth because it captures the imaginations of people of all types and ages, and educates and inspires as much as it is fun.

The world clock is definitely up there for illustrating how times have changed since now, obviously, we can all find out the time around the world by looking in our pockets. The carousel of progress is iconic... but I was surprised to learn they haven't done a modern 'future' section. It is funny that TomorrowLand Tokyo looks so sterile, while parts of downtown Tokyo actually look not unlike DiscoveryLand Paris. Any idea what kinds of attractions are there? Maybe it's supposed to be a more realistic and less fantastical take on the future - I suppose that, too, has a place in all this variety. As for Tomorrowland the movie? Honestly, it looks like a stinker with a couple of good moments thrown in, unlikely to spark a franchise like Pirates of the Carribean did.... but, all this nostalgia is kind of making me want to go see it :).
Reply  |  Post Message  |  Messages List  |  Start a Board

I share your passion for Disney and the visionary that Walt had. One of the aspects that I love about Disney is how they use and incorporate technology as part of there business model (which you've covered in detail in past articles).

That futuristic view is one of the aspects that I love Epcot.

@Strustician- Disney might be selling them real cheap right now. They tried to revive the ride recently and it didn't go well. It was still fairly unreliable and not that much fun. You might be able to pick one up from them.
Reply  |  Post Message  |  Messages List  |  Start a Board

First off, where are the giant robots and neon lights in Tokyo Tomorrowland?  Perhaps they figured everything would just be white and grey, oh wait, just about every new thing now seems to be that way when it comes to buildings and technology!

But seriously, where can I get one of those hover bumpercars?
Reply  |  Post Message  |  Messages List  |  Start a Board
Editors' Choice
Hot Topics