Fitbit, eager to bolster its lead in the fitness tracker market and make a preemptive strike against Apple's smartwatch, released three new models Monday, including a smartwatch.

Fitbit currently dominates the fitness tracker market, accounting for almost 40% of sales, according to a Parks Associates report; Samsung and Nike place second at 14% each. Yet Harry Wang, director of health and mobile product research at Parks Associates, said in a blog post that the report, released in August, predated the long-anticipated Apple Watch, and only 6% of US households have a digital pedometer or fitness tracker.

Forrester Research predicts that Apple not only will legitimize wearables but also will dominate the market, thanks to its combination of brand and hardware smarts. "As millions of these [Apple Watches] find their way onto people's wrists by year-end 2016, this category will become a crucial battleground for companies hoping to deepen their digital relationships with customers," Forrester said. Google and Amazon are likely to follow close behind Apple.

Fitbit's portfolio
All three new Fitbit devices are worn on the wrist and measure activity such as steps taken and floors climbed. These devices are the first to be released since Fitbit's voluntary recall of the Fitbit Force in February 2014. Independent laboratory tests determined that some users likely experienced allergic contact dermatitis, company CEO and co-founder James Park said on a Fitbit blog. The new models incorporate lessons learned from its Force recall, he said.

The Fitbit Charge, available now for $129.99, and the Charge HR, scheduled to be available next year for $149.99, both include a sleep-tracking module, integrated CallerID when paired with a smartphone, an accelerometer, and an altimeter. The Charge's battery offers up to seven days of use. The Charge HR also includes an embedded heart-rate monitor that allows users to also track calories burned. The Charge HR's battery lasts five days on one charge, according to Fitbit. 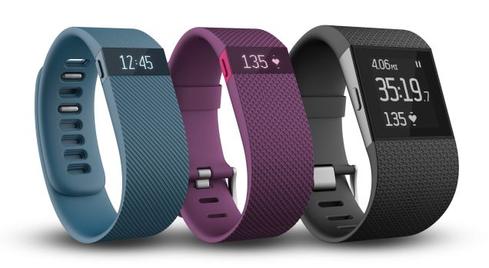 Though Fitbit is not marketing the Fitbit Surge as a full-fledged smartwatch, the device, priced at $249.95, delivers text notifications and music and offers wireless synching. Boasting a square LCD touch screen, the device monitors users' heart rate and supports multiple sports and activities. It includes all the Charge HR's features and adds built-in GPS, so it can track runs and walks and report gait, elevation, and route history. Like Apple's new watch, Surge is not expected to ship until 2015.

The Internet of Things demands reliable connectivity, but standards remain up in the air. Here's how to kick your IoT strategy into high gear. Get the new IoT Goes Mobile issue of InformationWeek Tech Digest today (free registration required).

Alison Diana is an experienced technology, business and broadband editor and reporter. She has covered topics from artificial intelligence and smart homes to satellites and fiber optic cable, diversity and bullying in the workplace to measuring ROI and customer experience. An ... View Full Bio
We welcome your comments on this topic on our social media channels, or [contact us directly] with questions about the site.
Comment  |
Email This  |
Print  |
RSS
More Insights
Webcasts
What We Can Learn from Sports Analytics
Protecting Your Enterprise's Intellectual Property
More Webcasts
White Papers
The Value of Threat Intelligence with DomainTools: Identify Threats 82% Faster
Full Body Exposure: CybelAngel Analysis of Medical Data Leaks
More White Papers
Reports
2020: Threats in Review
IDC FutureScape: Worldwide Digital Transformation Predictions
More Reports

Yeah I too feel Apple will take the brand market. But most probably companies gadgets like smartwatch made by companies like Fitbit since it will be cheaper than the brandname will be used by majority of the people . If the product gives the same service for a cheaper price why not. This is one war I would love to watch how the market tilts!

The Register had an interesting piece arguing that the Apple Watch is all about the Chinese market. It sounds plausble to me.
Reply  |  Post Message  |  Messages List  |  Start a Board

Some people will want the brand panache associated with Apple. Others may be more price sensitive and shop on cost. Misfit, for example, recently came out with a $50 tracker that seems to do many of the same basic tracking things as Fitbit, Jawbone, or Nike. If all you want to do is monitor your steps and sleep at the prompting of your conscience, doctor, or loved ones, then something like that could well do the job. If it's more of an ego thing or you're much more involved in fitness, then perhaps something fancier is necessary.
Reply  |  Post Message  |  Messages List  |  Start a Board

@ Alison. I agree with you. I would think many people just want something basic and do not want a really expensive watch.  I think about institutions that have to monitor patients' health on a regular basis can potentially take advantage of affordable health monitors like the fitbit.  I can even see coaches using such devices to help them monitor their health of their athletes, especially in sports like football where players injury is the norm.
Reply  |  Post Message  |  Messages List  |  Start a Board

A while back I wrote an article asking whether Fitbits and other tracking devices would ever be covered by insurance: The resounding response was "no." Further, most respondents didn't think they'd even fit under the category of pre-taxable health devices for personal health saving accounts. Personally, I think moving these products into that type of non-taxable category would be smart, both economically and as a matter of perception. I'm no economist so have no clue how much it would cost the nation, though!

Friends I know who own these products all bought them of their own accord, although some were advised to by doctors who wanted my friends to lose weight and/or get more exercise. I could foresee a time when healthcare systems sell their own white-label versions of a Fitbit (or more likely an off-label brand), preloaded with approved apps and integrated with patients' EHR.
Reply  |  Post Message  |  Messages List  |  Start a Board

The Fitbit Surge is aimed at the target market of runners that has long had a range of watches to choose from. We're used to big, cluncky, GPS-capable watches from the likes of Garmin, Timex, Motorola, TomTom, Nike, Soleus and a few others. Dependence on proximity to a phone -- as the Apple watch and Samsung watches require -- is an unthinkable compromize. We want-stand-alone devices, so the Surge scores well there, and it also looks sleeker than most GPS watches.

As for routine monitoring of "health," even amature athletes like me sneer at the counting of footsteps to the refridgerator as progress toward a "fitness" goal? And who needs continuous hearbeat monitoring? You want monitioring for serious training, but otherwise, does it help anybody to know they're at 60 BPM as they're typing an email or eating a donut?
Reply  |  Post Message  |  Messages List  |  Start a Board

That's great insight from an athlete -- and it's a problem fitness monitor makers face. Research I've seen shows early adopters were serious athletes like you, either professionals or amateurs who seriously pursued running/ biking/ other sports for health/fun. In trying to promote these fitness bands to more casual users, in encouraging couch potatoes to use them to not only monitor steps but to increase the number of steps they take and calories they burn, fitness monitor makers appear to run into challenges, these studies find. Although a good percentage of buyers adopt these devices with the best of intentions, they soon relegate the bands to dresser drawers or countertops; they become the equivalent of clothing-covered treadmills.

If I was a fitness band-maker, I think I'd focus heavily on the professionals and avid athletes like you, designing products I knew people would use and rely on. In targeting the mass market, price and color could be the key differentiators since their usage-life most likely is as long as any other fashion item.
Reply  |  Post Message  |  Messages List  |  Start a Board

I received a Fitbit One as a promo. My 13-year-old son was so excited about it I let him use it. Sure enough, the novelty wore off after a few weeks. Then I used it for about six weeks and found that my ordinary life was generating pretty much the same activity and food-diary info every week. You don't need a monitor to tell you you're sitting on your ass too much or eating the too much or the wrong foods. You just know it.

As for logging runs, that's something runners have done for eons with paper logs. It's a training tool for preparing for races and a record of accomplishment. I'm just not going to feel the same way about taking 9,000 steps today versus 7,500 yesterday and logging 100 fewer calories today than yesterday.

When I'm running, i don't want to know my heart rate. Just too much information. I know when I'm fatigued or pressing too hard.
Reply  |  Post Message  |  Messages List  |  Start a Board
Editors' Choice
Hot Topics