Ford Will Start Testing Its Self-Driving Car In 2016 - InformationWeek

50%
Tweet
Following an announcement about its $4.5 billion investment in electric vehicles, Ford is also moving forward with self-driving car tests. Its driverless Fusion vehicle will start cruising California streets in 2016.

The carmaker's enrollment in the program, which allows Ford to test autonomous vehicles on public roads, is further advancement of the company's 10-year autonomous vehicle development program, and a key element of Ford Smart Mobility game plan.

In addition to its testing plans, Ford has also expanded its Silicon Valley facility from a 15-employee office to a 100-plus-person research and development center. The team has been conducting tests this year on different aspects of autonomous vehicle technology, including camera-based pedestrian detection and virtual test drives.

The Ford Research and Innovation Center Palo Alto lab opened in January. The facility expanded Ford’s presence in Silicon Valley, which dates back to 2012. About 80% of the Palo Alto team joined Ford from the technology sector, while the remaining 20% are Ford employees from the US, China, Germany, and Australia. 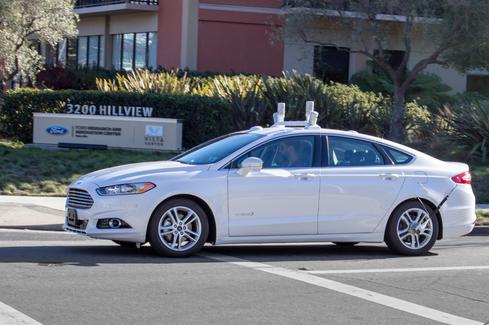 In addition, Ford has been conducting sensor tests to better detect and track objects in the vehicle's view, fusing information together to provide a 360-degree view of the car's surroundings, including street signs, other vehicles, and pedestrians.

As part of the Palo Alto lab's advanced experimentations, which go beyond driverless cars and electric-powered vehicles, the company is conducting data collection trials from Ranger pickups and motorcycles outfitted with OpenXC technology.

Ford is also working with Riders for Health to collect GPS data and mapping coordinates to make healthcare, vaccines, and medication delivery to people throughout rural Africa more efficient and accessible.

In addition, the company is further expanding its strategic research collaboration with Stanford in 2016, planning 13 projects covering all five areas of Smart Mobility-- connectivity, mobility, autonomous vehicles, the customer experience, and data and analytics.

Back on the driverless side, autonomous vehicles are becoming a more common presence in real-world test scenarios, with Google self-driving cars roving the streets of Austin, and Daimler hitting the highway with tests of a series-production truck on the A8 between Denkendorf and Stuttgart airport.

In fact, while Google's self-driving cars have been involved in a few accidents since they have started to hit the road -- always due to real live human drivers -- the company chalked up a new violation by driving too slowly.

A Mountain View police officer stopped one car that was traveling 24 mph in a 35 mph zone, and made contact with the operators to learn more about how the car was choosing speeds along certain roadways, and to educate the operators about impeding traffic.

[Take a look at InformationWeek's interview with Ford's CIO.]

Most recently, Nissan announced at the 2015 Tokyo Auto Show in early November that it has begun testing its first prototype vehicle that demonstrates piloted driving on both highway and city roads.

In two years the company plans to introduce a new system that allows vehicles to successfully manage urban roads, including intersections, autonomously.

The prototype vehicle, based on the Leaf electric vehicle, will be tested in actual traffic conditions on both highway and urban roads to develop and further enhance Nissan Intelligent Driving for public use.

Nathan Eddy is a freelance writer for InformationWeek. He has written for Popular Mechanics, Sales & Marketing Management Magazine, FierceMarkets, and CRN, among others. In 2012 he made his first documentary film, The Absent Column. He currently lives in Berlin. View Full Bio
We welcome your comments on this topic on our social media channels, or [contact us directly] with questions about the site.
Comment  |
Email This  |
Print  |
RSS
More Insights
Webcasts
Building a Strategy for Detection and Response
5 Steps to Integrate SAST into the DevSecOps Pipeline
More Webcasts
White Papers
Power Your Business With the Right Azure Strategy
Are you leveraging all the benefits of cloud computing?
More White Papers
Reports
Global Cloud Proxy Enables VPN Split Tunneling
2019 Threat Hunting Report
More Reports

the more competition the better in this area.  I hope Ford is able to bring a new perspective or push for autonomous cars in areas where other competitors have neglected.  I hope this research helps reduce car accidents which in a main cause of death in today's roads.
Reply  |  Post Message  |  Messages List  |  Start a Board

I'm glad to see that Ford has been working on this sort of technology for a good decade, as it seemed to be woefully behind the times to only begin testing now.

Still, I wonder if it's only had a small research team on it, if indeed it can offer a relative competitor to Google, Baidu or Tesla, which all seem ahead of the game.
Reply  |  Post Message  |  Messages List  |  Start a Board

@danielcawrey I agree with you. What sort of security measures has been taken in to consideration during the development of these cars?
Reply  |  Post Message  |  Messages List  |  Start a Board

I still think we are a long way off to seeing massive numbers of self-driving cars on the road. While the technology is certainly appealing, there are some issues that need to be dealt with here, including the fact that these vehicles will have to contend with drivers.

That's probably going to be the hardest thing about shifting to driverless cars in the future.
Reply  |  Post Message  |  Messages List  |  Start a Board

While I am excited about the promises of autonomous cars, I worry that these companies won't be able to anticipate the security risks that they will be facing.  Hackers are getting more sophisticated, and as the technology progresses, they will be increasingly more vulnerable to zero day threats that could cause significant damage.

Hopefully Ford is making security a key element of their systems to ensure that consumers won't have to be as concerned with the safety of their cars.
Reply  |  Post Message  |  Messages List  |  Start a Board
Editors' Choice
Hot Topics