In the HoloLens, Microsoft might at last have its version of the iPod, a cool product that turns the company's image around.

It isn't a surprise to anyone, including Satya Nadella, that Microsoft has a coolness problem. The easy way to put it is that it's not Apple, but the coolness issue goes deeper than that. Despite the Xbox, Microsoft is associated with work. That's where we are forced to deal with its products every day. What's cool about that?

Enter the HoloLens: The thing that might make Microsoft cool for the first time, and the "killer app" for gaming that Oculus Rift is missing. I don't know if Microsoft would like me wording it this way, but I think of HoloLens as part Oculus Rift and part Google Glass. It is a wearable computer powered by Windows 10 with headgear that allows for augmented reality in the form of 3D holograms. Unlike the Oculus Rift, which has an opaque lens that immerses you in your environment, the HoloLens helmet combines 3D graphical holograms with actual reality. Here's a video:

HoloLens can follow your eyes and your head movements, as well as hand gestures, in order to manipulate the holograms. Microsoft has already created a 3D design app for HoloLens that allows you to go straight from prototype to 3D printing. In the demo of HoloLens during an event at its Redmond, Wash., headquarters Wednesday, Microsoft created a design for a toy helicopter and then produced the working helicopter for the audience.

It should be pointed out that there was a little stagecraft going on there, since clearly the design didn't include creating working motors and whatnot from scratch. It was merely a design of modular parts. Still, it is quite impressive. While it seems out of the future, it does have a present. NASA and Microsoft have already hooked up for a project called OnSite. OnSite will allow scientists to "walk" the surface of Mars to get a better idea of what the Curiosity Rover is seeing. Using maps and readings created by Curiosity, scientists can explore the Martian terrain as if they were there, minus the killer radiation and lack of oxygen.

[Want to see what else Windows 10 has to offer? Read Windows 10: Free Upgrades, Spartan Browser & Holographics.]

Remotely exploring Mars is nifty and all, but let's face it: The perfect place for HoloLens is gaming. And it is all about that transparent lens. This is the "killer app" to make VR gaming a reality. I've been down on VR goggles as gaming devices since they were announced. The reason was the opaque lens. Imagine standing in the middle of your room, totally immersed in a game universe that was out of sync with your own. You'd trip over the coffee table. You'd slam your fist into the TV. You'd kick your dog, who was just coming up to see why you were playing without him. For the Rift, or any other VR device, to work, you need to sit (killing the gesture part of it) or play in an empty, padded room.

The HoloLens lets you see the game and see reality at the same time. You might have caught a little gaming action in the video above. Right at the one-minute mark, you can see Microsoft's recent acquisition, Minecraft, played in 3D right in a man's living room. It blends in with the reality of the room. No kicking the coffee table. And that's not all. As do many VR helmets, the HoloLens has 3D sound, so if a hologram is sneaking up behind you, you can hear it, and you'll know it's behind you. And, unlike the other VR devices, you'll know whether the sound you heard was the game or a family member, so you don't clock your kid coming up to ask for a turn. 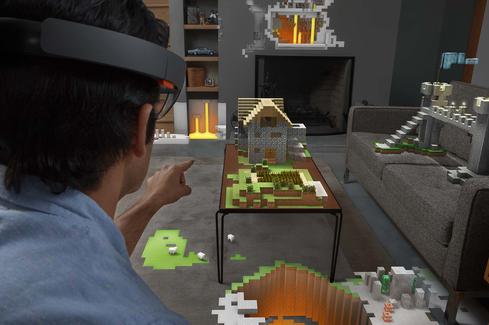 For movies or other more sedentary activities, Oculus Rift may provide a more immersive environment. But HoloLens is augmented reality at an entirely new scale. It is a computer, not a play thing. But it is also not intended to be a covert wearable. It isn't really and truly a mobile device. So it lacks the creep factor that Google Glass had. In other words, it is a shockingly cool thing coming from a usually uncool place.

I don't see HoloLens ever being used for 3D prototyping on an industrial scale. I don't see it having much of a place at work. But I think it fits well into Microsoft's living room strategy. If my Xbox One plays nicely with my HoloLens, then Microsoft can lock down gaming and entertainment in the living room. If it creates the app environment, maybe it even gets out of the living room. But, even if it sits on my coffee table waiting for me, it is clearly a game changer for the squares in Redmond, Wash.

Now everyone is going to ask, "Why didn't Tim Cook think of this?"

David has been writing on business and technology for over 10 years and was most recently Managing Editor at Enterpriseefficiency.com. Before that he was an Assistant Editor at MIT Sloan Management Review, where he covered a wide range of business topics including IT, ... View Full Bio
We welcome your comments on this topic on our social media channels, or [contact us directly] with questions about the site.
Comment  |
Email This  |
Print  |
RSS
More Insights
Webcasts
Cybersecurity's Next Wave: What You Should Know
Strategies for Success with Digital Transformation
More Webcasts
White Papers
Why Add Security to Your Skill Set and How to Do It
Sunburst: Impact and Timeline
More White Papers
Reports
Key Strategies for Managing New Risks in Cybersecurity
Are Unprotected Cloud Databases Leaking Your Data?
More Reports

@ david. Good point.  They really how to asses to gain a market advantage using this technology.  Some other company can come up and make it better beating them in the market.
Reply  |  Post Message  |  Messages List  |  Start a Board

@Nomi- It will be interesting to see if the new browser from Microsoft learns from the IE mistake, too. If it does, then they have really started to do an organizational turn around which will be impressive.
Reply  |  Post Message  |  Messages List  |  Start a Board

@David: you are very right on that, we have also seen the example of tablet launched by MS a decade ago and how apple learnt from that and introduced a specific OS designed for touch interface. Until now I didn't think MS was good at learning from mistakes after the mishaps of Zune, IE, win 8.
Reply  |  Post Message  |  Messages List  |  Start a Board

@whoopty- I think it is using cloud processing. I think it requires a connection. Still, your point is taken that the helmet alone seems unlikely to be useful without support. I'm OK with that though even if I need to be near a desktop or something.
Reply  |  Post Message  |  Messages List  |  Start a Board

@Pedro- Sometimes with something like this, first mover advantage doesn't help. I think Microsoft learned from the mistakes it was seeing. Sort of reminds me of what iPhone did to Blackberry. Blackberry was great right up to a point. and then iPhone "fixed it.'
Reply  |  Post Message  |  Messages List  |  Start a Board

I think this has some pretty interesting applications - perhaps initially for gaming, but I like the idea of having someone help you with tasks right in-front of you. There's also a big potential for distance based medical aid as well I think.

However, I am dubious about Microsoft's claims of not needing exterior processing. There's no way that advanced games are being played on this with smartphone level processors. This will need a good few years before AAA like games are possible.
Reply  |  Post Message  |  Messages List  |  Start a Board

Honestly, with all the computerize eyewear that I have seen. it is hard to believe that Microsoft beats all of them.  It is not intrusive like oGogle glass or bulky like oculus right. It is just the perfect size and helps the user in accomplishing their task at hand.  I'm sure engineering and architectural students would love to use something like this.
Reply  |  Post Message  |  Messages List  |  Start a Board

@kelly22- I'm glad someone who saw it in person felt the same way since I know these things can sometimes look great on the commercial and not work in reality. One thing I want to know is if the person wearing the helmet really sees everything as clearly as it looks in the commercial. Can't wait for Microsoft to start demoing it at conferences like Occulus Rift is doing.
Reply  |  Post Message  |  Messages List  |  Start a Board

I was on the edge of my seat during the HoloLens presentation on Wednesday. It is (quite literally) a game-changer for Microsoft; I can only imagine playing games with that kind of device. And, as OnSite shows, it has applications far beyond gaming as well. Crazy to see something out of a sci-fi movie work in real life.
Reply  |  Post Message  |  Messages List  |  Start a Board
Editors' Choice
Hot Topics