Google's parent company -- Alphabet -- is reportedly looking to sell Boston Dynamics, the robotics firm that the company acquired in 2013, according to a March 17 Bloomberg report.

Boston Dynamics, which specializes in robots for military applications, is best known for the development of BigDog, a quadruped robot designed for the US military with funding from Defense Advanced Research Projects Agency (DARPA).

The company was spun off from the Massachusetts Institute of Technology (MIT) in 1992 and eventually sold to Google X, a semi-secret research and development facility created by Google, for $500 million, where it was managed by Andy Rubin, the company's former chief of its Android division.

However, as Bloomberg reports, two people familiar with the company's plans were quoted as saying Boston Dynamics is unlikely to come up with a marketable product in the foreseeable future, which clashed with parent company Alphabet's overall plans.

In addition, internal tensions had arisen between the Boston Dynamics team -- Rubin brought over more than 300 robotics engineers following the acquisition -- and Google's robotics teams in California and Tokyo.

In a November meeting, Jonathan Rosenberg, an adviser to Alphabet CEO Larry Page, was recorded as saying "there's some time frame that we need to be generating an amount of revenue that covers expenses and (that) needs to be a few years," according to documents obtained by Bloomberg.

Other Google executives were uncomfortable with the company's exposure to negative public opinion surrounding robots and the indication that the company was developing products that would take jobs away from human beings. 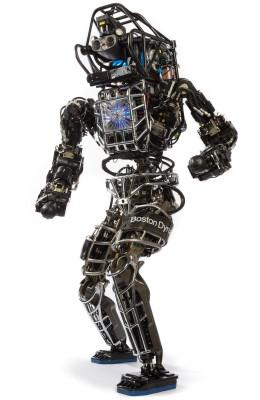 "There's excitement from the tech press, but we're also starting to see some negative threads about it being terrifying, ready to take humans' jobs," Courtney Hohne, a director of communications at Google and the spokeswoman for Google X, wrote in an internal email obtained by Bloomberg.

These concerns were heightened by a video posted to YouTube that garnered a lot of media attention -- a video many found to be simultaneously humorous and terrifying, as it depicted a sort of punch-drunk Terminator-style humanoid lumbering around in the woods.

That robot, called Atlas, includes 28 hydraulically actuated degrees of freedom, two hands, arms, legs, feet, and a torso. The rescue robot also has articulation in the hands that allow it to use tools designed for humans.

In addition, an articulated sensor head includes stereo cameras and a laser range finder. Atlas is powered from an off-board, electric power supply from a flexible tether.

"We're not going to comment on this video because there's really not a lot we can add, and we don't want to answer most of the Qs it triggers," Hohne's letter continued.

The Bloomberg article noted potential buyers of Boston Dynamics include Toyota Research Institute, a division of Toyota Motor Corp, and Amazon, which uses sophisticated robots in its distribution centers.

The sale doesn't mean Google is getting out of the robotics game completely, though. In addition to Boston Dynamics, other robotics specialists Google has bought in the past couple of years include Industrial Perception, Bot & Dolly, Autofuss, Meka, Redwood Robotics, Schaft, and Holomni.

Nathan Eddy is a freelance writer for InformationWeek. He has written for Popular Mechanics, Sales & Marketing Management Magazine, FierceMarkets, and CRN, among others. In 2012 he made his first documentary film, The Absent Column. He currently lives in Berlin. View Full Bio
We welcome your comments on this topic on our social media channels, or [contact us directly] with questions about the site.
Comment  |
Email This  |
Print  |
RSS
More Insights
Webcasts
Making XDR Work in Your Enterprise - May 12
Multi-Cloud Data Management for Modern Applications
More Webcasts
White Papers
2020 Digital Transformation Report
The Microsoft Teams Telephony User Experience
More White Papers
Reports
Are We Cyber-Resilient? The Key Question Every Organization Must Answer
A Decade of Passive DNS
More Reports

While I think a decision to sell this company off for these reasons cited would be extremely shortsighted from a business perspective, I am at least a little (and I do mean just a little) relieved that Alphabet/Google seems to want to backstep on a business venture like this when everything else about what they do and how they do it screams that their long-term goal is to take over the world.
Reply  |  Post Message  |  Messages List  |  Start a Board
InformationWeek Is Getting an Upgrade!