The indispensable Google Maps and its highly addictive cousin, Google Earth, are getting major quality updates thanks to Landsat 8 satellite imagery.

In an effort to create a cloud-free map of the Earth, Google looked at millions of images and took the clearest pixels to stitch together a cloudless and seamless image.

The new imagery is available across all of Google's mapping products. To check it out, users simply open up Google Earth or turn on the satellite layer in Google Maps.

Landsat 8 is an American Earth observation satellite that images the whole planet every 16 days, and captures images with greater detail and truer colors than done previously, at an unprecedented frequency, creating twice as many images as Landsat 7 does every day. 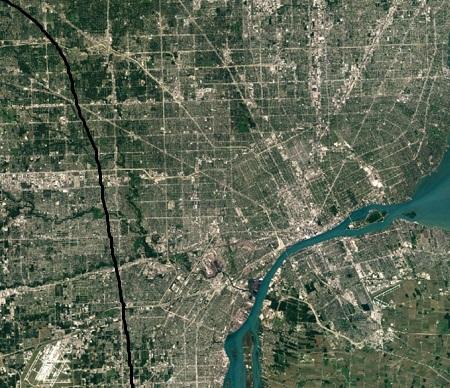 The Landsat 8 satellite, which launched into orbit in 2013, is the newest sensor in the US Geological Survey (USGS) and NASA Landsat Program.

For example, comparing two images of Manhattan in New York City on the company's Google Maps blog, one can see the difference in detail. In the new view of New York City, details like skyscrapers, building shadows, and baseball and softball fields in Central Park show up with a much higher level of clarity and sharpness.

"Three years ago we introduced a cloud-free mosaic of the world in Google Earth. Today we're rolling out an even more beautiful and seamless version, with fresh imagery from Landsat 8 satellite and new processing techniques for sharper images than ever before," Herwig wrote.

Landsat has observed the Earth continuously from 1972 to the present day and offers a wealth of information on the changes to the Earth's surface over time. Herwig noted the update to Maps and Earth was made possible in a large part thanks to the program and its commitment to free and accessible open data.

The update also allowed Google to fill in some large diagonal gaps in maps that were affected by a hardware failure on Landsat 7 images captured after 2003.

Not one to be left out of the fun, Google's Street View team, responsible for driving around the world and mapping the world from a human-scaled perspective, has been going on some wild rides of its own as of late, including one to the colorful and exotic Coral Triangle in Asia, home of the richest coral reefs on Earth, and the horrific prison cells of Robben Island, South Africa, where Nelson Mandela spent 18 years in solitary confinement before attaining freedom.

Nathan Eddy is a freelance writer for InformationWeek. He has written for Popular Mechanics, Sales & Marketing Management Magazine, FierceMarkets, and CRN, among others. In 2012 he made his first documentary film, The Absent Column. He currently lives in Berlin. View Full Bio
We welcome your comments on this topic on our social media channels, or [contact us directly] with questions about the site.
Comment  |
Email This  |
Print  |
RSS
More Insights
Webcasts
People Are The Most Important Part of Autonomous SOC
Don't Miss This Cybersecurity Virtual Event
More Webcasts
White Papers
Supercharge Incident Response with DDI Visibility
MontanaPBS Shifts to Agile Broadcasting with Help from Raritan KVM Solutions
More White Papers
Reports
The State of Endpoint Security
Enabling Enterprise Resiliency Through Cyberthreat Detection
More Reports

Apple Maps is in the middle of the same image upgrade. All mapping software will be moving to this. Google does allow you to magnify the image past the point of the maximum resolution, so be aware that at maximum magnification you're not getting any more information in the image.
Reply  |  Post Message  |  Messages List  |  Start a Board
Editors' Choice
Hot Topics