The Loch Ness Monster probably doesn't exist, but Google Maps is putting a new level of fun back into the hunt for Nessie.
8 Google Projects To Watch in 2015
(Click image for larger view and slideshow.)

Google Maps has taken users inside museums around the world and under CERN. It's even transformed cities into Pac-Man levels. Now the search giant has brought 360-degree Street View imagery of Loch Ness in Scotland to Maps, so you can go in search of Nessie yourself.

The search giant announced the feature on Tuesday, April 21, to coincide with the anniversary of the legendary "Surgeon's Photograph" from 1934, which purportedly revealed the Loch Ness Monster to the world.

The controversy surrounding the authenticity of the photo captivated the world. It remains to this day one of the preeminent symbols of conspiracy theories, or hoaxes, depending on your view of the matter.

"Like the world's best legends, the Loch Ness Monster transcends the everyday and exists at the edges of possibility," Sven Tresp, Google's program manager for Street View special collections, wrote on the company's official Maps blog. 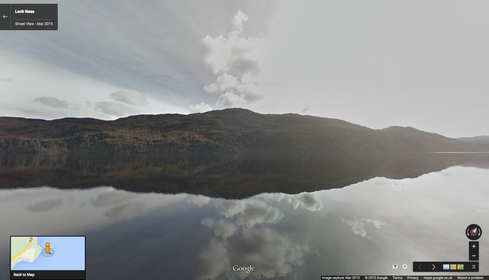 "It rises above the sightings and the hoaxes; the claims and counter-claims; the tourism, the nationalism -- and even the assassination plots," Tresp added. "It lives in the telling of stories. Whether or not you believe, most people hold a romanticized vision of the creature that, legend has it, plumbs the depths of the Loch."

In addition to the tour, Google also celebrated the anniversary on its main Web search page with a custom Doodle of an animated Nessie submarine driven by three aliens.

The Doodle's creator explained that sketching boats in dockyards, where the underwater workings of the vessels were revealed, served as the inspiration for the illustration.

In developing the Loch Ness tour, Google partnered with experts at the Catlin Seaview Survey, who dived deep under the surface of the lake, collecting imagery along the way.

Loch Ness stretches for 23 miles southwest of Inverness, Scotland. At 800 feet in depth, it is the largest Scottish loch by volume, containing more fresh water than all the lakes of England and Wales combined.

Google also produced a slick two-and-a-half-minute documentary about the process featuring Adrian Shine, the leader of the Loch Ness and Morar Project.

Shine, a Loch Ness expert, has logged more than a thousand Nessie sightings, and has offered scientific explanations for why people claim to have seen Scotland's mysterious cryptid. Tresp called Shine, who has been engaged in fieldwork in the Highlands since 1973, an "integral part" of the project.

"Wherever you stand on the Nessie debate, the legend lives on -- even in the digital era," Tresp wrote. "Let the Loch unlock the spirit of your imagination, where the rippling water, tricks of the light, and drifting logs bring the legend of Nessie to life."

[ Read about the latest updates to Android Wear.]

This is the second time this month that Google has shown off its creative and playful side. On April Fools, Google rolled out several of its patented pranks, including Smartbox by Inbox and the company's Actual Cloud Platform.

However, Google saved the best for last by combining the video game classic Pac-Man with Google Maps -- allowing users to turn their neighborhood into the arcade of their youth.

Nathan Eddy is a freelance writer for InformationWeek. He has written for Popular Mechanics, Sales & Marketing Management Magazine, FierceMarkets, and CRN, among others. In 2012 he made his first documentary film, The Absent Column. He currently lives in Berlin. View Full Bio
We welcome your comments on this topic on our social media channels, or [contact us directly] with questions about the site.
Comment  |
Email This  |
Print  |
RSS
More Insights
Webcasts
Monitoring Critical Cloud Workloads
4 Practical Tips for Building a Data Lake
More Webcasts
White Papers
Future Proofing Your Network for 5G
Automate Your Cloud Compliance Journey in 6 Steps
More White Papers
Reports
The State of Cybersecurity Incident Response
Dark Reading Report: Battle for the Endpoint
More Reports

@yalanand Do you speak from first-hand experience? Do you work there?
Reply  |  Post Message  |  Messages List  |  Start a Board
InformationWeek Is Getting an Upgrade!