If you're in for a hair-raising slice of vertigo, check out Google's Street View climb of El Capitan in Yosemite. It's not for the faint of heart.

Google is many users' go-to mapping service thanks to its Street View feature, which gives people a street-level of view of cities and towns all over the world. Now, the company has gone vertical.

The search giant unveiled its first vertical street view adventure, a climb up El Capitan, a 3,000-foot tall rock formation in Yosemite National Park that's located on the north side of Yosemite Valley.

Known as one of the world's favorite sites for rock climbers and BASE jumpers, El Cap once again hosted a team of professional climbers, including Tommy Caldwell, who completed the first free ascent of Yosemite's most difficult route, the Dawn Wall, in January.

Along with legendary climbers Lynn Hill and Alex Honnold, the team ascended the rock with a minimum of climbing equipment, creating two sets of vertical Street Views: One with Hill and Honnold in iconic spots up the sheer vertical face, and another of Honnold climbing the entire vertical route of "The Nose" on El Capitan. 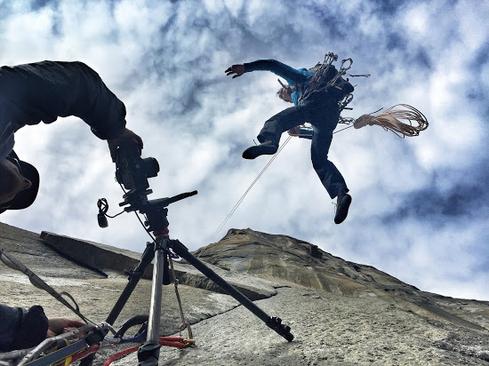 "Climbing is all about flirting with the impossible and pushing the boundaries of what you think you can be done," Caldwell wrote on Google's Maps blog. "Capturing Street View imagery 3,000 feet up El Capitan proved to be an extension of that, especially when you take a camera meant for the inside of a restaurant and mount it thousands of feet up the world's most iconic rock wall."

The crystal-clear, high-definition images are not for the faint of heart. Even on a 13-inch laptop screen, they have the power to introduce some serious vertigo.

The team also helped create a new Yosemite Treks page, where climbing aficionados can take a tour up El Cap and learn more about the sport. The tour touches on everything from insider lingo to equipment.

"Yosemite's driven so much of my life that I'm excited to be able to share it with the world through my eyes. These 360-degree panoramic images are the closest thing I've ever witnessed to actually being thousands of feet up a vertical rock face -- better than any video or photo," Caldwell wrote. "But my hope is that this new imagery will inspire you to get out there and see Yosemite for yourself … whether you travel up a rock wall or just down the trail."

This is far from Google's first adventure away from the Main Streets of the world. The company's ambitions have extended to some impressive -- and familiar -- corners of the world, including Loch Ness in Scotland, legendary home of its monster, and one of the most active volcanoes in the world, Mount Etna in Sicily.

Nathan Eddy is a freelance writer for InformationWeek. He has written for Popular Mechanics, Sales & Marketing Management Magazine, FierceMarkets, and CRN, among others. In 2012 he made his first documentary film, The Absent Column. He currently lives in Berlin. View Full Bio
We welcome your comments on this topic on our social media channels, or [contact us directly] with questions about the site.
Comment  |
Email This  |
Print  |
RSS
More Insights
Webcasts
How the Rapid Shift to Remote Work Impacted IT Complexity and Post-Pandemic Security Priorities
Cybersecurity Risk Management
More Webcasts
White Papers
2020 SANS Enterprise Cloud Incident Response Survey
The Top 5 Mistakes Everyone is Making in Vulnerability Remediation
More White Papers
Reports
Immuta Data Engineering Survey: 2021 Impact Report
Are Unprotected Cloud Databases Leaking Your Data?
More Reports

@danielcawrey yes, and maybe they can serve as backgrounds for exercises, to make the fake rock climing and the like more exciting.
Reply  |  Post Message  |  Messages List  |  Start a Board

Not to be viewed by those subject to vertigo.
Reply  |  Post Message  |  Messages List  |  Start a Board
Editors' Choice
Hot Topics