50%
Tweet
Google is forced to pull a Gmail April Fools' Day joke called Mic Drop after users accidentally tell off coworkers and employers. However, the search giant had some other gags ready to go.

Google is one of the best purveyors of April Fools' Day jokes, but things went off the rails this year. A supposed new Gmail feature called Mic Drop actually worked, and resulted in some less-than-professional emails reaching the wrong people.

The intent behind Mic Drop was to offer people the last word in annoying email.

"Email's great," explained Google, "but sometimes you just wanna hit the eject button. Like those heated threads at work, when everyone's wrong except you (obviously). Or those times when someone's seeking group approval, but your opinion is the only one that matters (amirite?). Or maybe you just nailed it, and there's nothing more to say (bam)."

With Mic Drop, users hit a button and sent a GIF of a Minion dropping a mic and walking away. The feature purported to block all future messages in the thread. Well, turns out it worked too well. 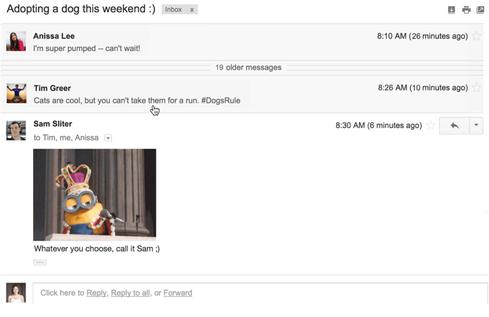 Users were quick to complain.

"I hit this thing by accident in a professional email sending a contract," wrote one user. "This is ridiculous and not funny at all. Remove it please!!!"

"Thanks to Mic Drop I just lost my job," wrote another. "I am a writer and had a deadline to meet. I send my articles to my boss and never heard back from her."

"This sounds like such a joke," complained yet another, "but unfortunately it is not. I sent out an important email to 30 recipients and inadvertently clicked the Mic Drop Send."

Google was forced to backtrack on the joke: "Well, it looks like we pranked ourselves this year. Due to a bug, the Mic Drop feature inadvertently caused more headaches than laughs. We're truly sorry. The feature has been turned off."

Mic Drop isn't the only Google joke on deck for the day.

"Whatever you want to say, emoji can say it better (obvs)," according to Google. "So we figured we'd take the deep neural network behind Smart Reply, and make it more sassy. The result is emoji suggestions in addition to (or instead of) really boring text replies. In our testing, we've also found that emoji do a better job of plumbing the emotional depths of one's soul, so we're optimistic that today's update will encourage more open and honest email conversations."

Google also has a new tool to help developers prepare their Android apps for outer space. Yes indeed, Google is preparing for the new era of space exploration, and it wants to be sure developers can prepare their apps for distribution to those who are off-planet:

With advances in space exploration and the advent of galactic tourism, there will be a high number of users beyond this world that developers need to start thinking about, too. Google Play can now help you reach them. We've added new features to the Google Play Developer Console and updated the material design guidelines, to help you design, test, and distribute your apps and games in space.

Be careful out there today, folks.

Eric is a freelance writer for InformationWeek specializing in mobile technologies. View Full Bio
We welcome your comments on this topic on our social media channels, or [contact us directly] with questions about the site.
Comment  |
Email This  |
Print  |
RSS
More Insights
Webcasts
Building a Strategy for Detection and Response
Chatbots for the Enterprise
More Webcasts
White Papers
Crack Down on Password Sharing with IP Intelligence and Human Insight
Cyber Threats and Trends Report: 2019 Year in Review
More White Papers
Reports
2020 Cybersecurity Outlook Report
Cyber AI: An Immune System for Email
More Reports

@Technocrati: "Google needs to remember they are Google and not Yahoo."

>> While fun and probably intended for that end.  Google needs to remember they are Google and not Yahoo.

>> so we made sure to stop the person from doing something stupid like not reading an email they composed before sending it.
Reply  |  Post Message  |  Messages List  |  Start a Board


I don't recall seeing this button on April Fool's Day, I find it hard to believe I didn't send any email on that day.....


I had to laugh when I heard of the drop the Mic idea.  When will Google realize that not everyone of their users is as savvy as a Google employee.

While fun and probably intended for that end.  Google needs to remember they are Google and not Yahoo.

Not yet at least.

From Google's apology statement: Note that if you're a Google Apps business, education or government user this feature was never turned on.

@Banacek - I would have to agree with you that these stories sound a bit far-fetched.

I too, wonder when I see a gmail account used as a work account.  It makes me think the company doesn't even own a website.  I think you get at least 5 free ones when you sign up on Go Daddy :)

Of course, these people could be freelancers and that makes more sense.

But, it obviously wasn't the sender's fault - so once the recipient read this was all caused by Google's demented sense of humor, all should have been forgiven.
Reply  |  Post Message  |  Messages List  |  Start a Board

We had a tight-knit IT department at my last job and at that time, before security meant locking down the place like fort dix, everyone in IT had everyone else's passwords in the company (except for HRs - those were confidential).

So whenever we were getting a little punchy and needed to let off some steam, we may log into each other's system and may setup some autotext in Outlook to do something like, oh, I don't know, change the word "the" to the word "fart" every time the person typed it...or something juvenille like that.

You get the picutre.  But we all sat in a "bull-pen" at the time, as we called it, so we made sure to stop the person from doing something stupid like not reading an email they composed before sending it.

A bit different from executing an emoji upon sending, but still on a third-grade level.  My new coworkers aren't nearly as funny as the last bunch...I'd never try that here.  You have to know your audience.
Reply  |  Post Message  |  Messages List  |  Start a Board
Page 1 / 2   >   >>
Editors' Choice
Hot Topics