How IT Workers Can Survive Cold And Flu Season - InformationWeek

Your mother has been telling you this for years. Now that scientists agree, maybe you'll finally listen?

September marks the beginning of cold and flu season. Yes, that time of year where you don't want to shake anyone's hand or touch a doorknob or even think about using mass transit. Of course, as an IT worker, it's often your job to interact with people and their icky, germ-laden devices.

So, how can you protect yourself from getting sick? Turns out, all you need to do is sleep.

We're not talking about taking to your bed and hibernating until spring. We're talking about getting an honest-to-goodness full night's sleep. Every night.

A recent university study directly relates the amount of sleep you get to your chances of catching a cold or flu. It appears that 7 hours of shut-eye per night is the golden number. Sleep fewer than 7 hours a night, and you are four times more likely to get a cold. It doesn't matter what age you are, your stress levels, your education, or income. If you sleep at least 7 hours a night, you are far less likely to get a cold.

It's important to note here, that we're not talking about how much sleep you get after you've been exposed to cold germs. You have to get that much sleep every night in order to boost your immune system so when you encounter the evil cold and flu bugs, your body is ready to fight them off.

[ Of course, it doesn't hurt to avoid touching some things. Read 8 Germ Hotspots In The Office. ]

Researchers from the University of California-San Francisco and Carnegie Mellon teamed up for a study on the correlation between sleep and colds. For the research, 164 volunteers from Pittsburgh volunteered to take a series of surveys and exams about their basic health baseline, stress levels, cigarette and alcohol uses, and the amount of sleep they got.

The volunteers were then sequestered in a hotel where researchers exposed them to a cold virus via nasal drops. Those who had gotten fewer than seven hours of sleep per night in the week preceding the test were 4.1 times more likely than other study participants to get sick from the cold virus. 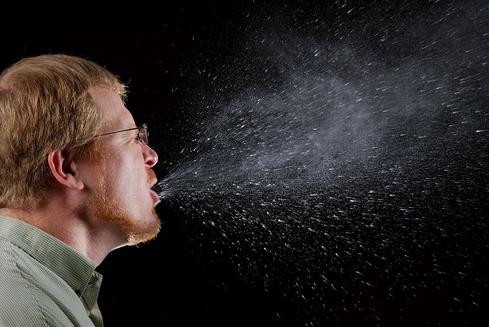 Of course, millions of us routinely get fewer than 7 hours of sleep a night. Actual sleep numbers are difficult to pin down because of problems with reporting (though fitness devices may soon change that). A 2013 Gallup poll found that the average American got 6.8 hours of sleep per night (that number has been steady since 1990), but self-reporting often leads to low numbers, because people like to appear tough.

A 2014 Bureau of Labor and Statistics study found that Americans got 9 hours sleep per night, but that data is known to be off because the question was based on when people went to bed, not when they went to sleep. So it doesn't account for time spent in bed reading or watching TV, using your smartphone, tossing and turning from insomnia, and, engaging in, um, "intimate" relations.

Still, 43% of respondents in the Gallup poll said they know they'd feel better if they got more sleep. So let's say about 40% of us are not getting enough sleep. We're setting ourselves up to get sick no matter how often we wash our hands or avoid travel.

Not only does it stink to get a cold, but it costs American people and American companies a whole lot of money when we get sick. Here's some startling data:

DVR your favorite late-night shows, turn off the smartphone, put the work laptop away, and get more sleep. Jon Stewart's off the air anyway. And you'll enjoy work so much more without the sniffles.

David has been writing on business and technology for over 10 years and was most recently Managing Editor at Enterpriseefficiency.com. Before that he was an Assistant Editor at MIT Sloan Management Review, where he covered a wide range of business topics including IT, ... View Full Bio
We welcome your comments on this topic on our social media channels, or [contact us directly] with questions about the site.
Comment  |
Email This  |
Print  |
RSS
More Insights
Webcasts
Unifying Your Endpoint Security Strategy
Monitoring Critical Cloud Workloads
More Webcasts
White Papers
Incident Readiness and Building Response Playbook
Defending Against Critical Threats
More White Papers
Reports
A Practical Guide to Enabling 5G Deployments
Are We Cyber-Resilient? The Key Question Every Organization Must Answer
More Reports

@soozyg- I'm not sure there is a study on whether teachers get sick less. I looked for it and couldn't find it. My experience with teachers is that they are always sick but can't call in sick, but that is entirely anecdotal.
Reply  |  Post Message  |  Messages List  |  Start a Board

@Gary_El- That isn't noon cracking. That's the rest of us opening our lunch boxes. :)
Reply  |  Post Message  |  Messages List  |  Start a Board
InformationWeek Is Getting an Upgrade!