IT Jobs Are Hot, Raises Not So Much - InformationWeek

IT job growth has been trending ahead of the national average, and remained hot for several months in a row. So, where are all our salary increases?

With a 4.5% unemployment rate, IT workers continue to fare better on the jobs front than the national average, according to the February jobs report from the US Bureau of Labor Statistics. The overall national unemployment rate fell to 5.5% in February, and the US economy added a robust 295,000 jobs last month, showing broad growth and signs of continued recovery.

Despite that great news, the shadow on the jobs report was a lack of wage growth. We’re out of the economic woods, so where are our salary increases?

Data released in late February showed that in 2014 average wages in the US rose 2.4% (3% if you count extra hours we worked). Those numbers are higher than those more than 11,000 survey respondents reported in the InformationWeek 2014 salary survey. Respondents to our survey reported only a 1.6% salary increase for staffers last year, though managers did get the 2.4% boost the rest of the economy saw. Given that IT workers suffered cuts, layoffs, and wage freezes from 2008 to 2013, you’d think with happy economic times, some salary adjustment was in order.

The reason probably comes in another number -- the participation rate. Simply put, that's the percentage of people who could have a job that do. If you are over 16, you qualify for the list.

The participation rate is 62.8% right now (historically low), and hasn't changed much at all in the past year. Pre-recession, we saw participation rates above 66%. Some of that number has to do with Baby Boomers retiring. The number may not actually rise to 66% again until after the Baby Boomers have all died. But, besides the Boomers, there is also a supply of "extra" workers. Some of them left the workforce because they were discouraged. And now they are coming back.

Every time you see the hiring numbers look good, and the unemployment number remain flat or even rise (as it did in January), it indicates that people are coming back into the workforce.

So the reason for lack of wage pressure is simple. There's a secret stash of worker supply: long-term unemployed folks who are trying to come back into the labor force. We should be thrilled for those people, but they are dragging down wages. How long will it last? 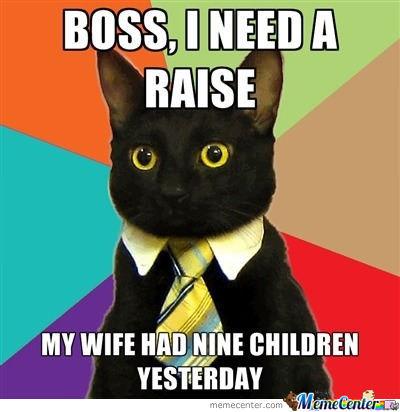 Most economists have been predicting wage increase for months. They still are. And, eventually, it will happen. But you may not see it until more like next year. By the time we give jobs to this extra stash of workers that's propping up supply, and then companies realize they have to start competing for workers, we might be into the fall (budget season for most companies).

Obviously, it depends on your situation, but asking for a raise right now might help you beat the rush (here are some ways to increase your IT salary). Or it might make you look foolish. But the job market is starting to switch from one that favors employers to one that favors employees. Watch carefully. If the hiring numbers stay hot, look for demand for your services to increase, and be ready to act accordingly.

David has been writing on business and technology for over 10 years and was most recently Managing Editor at Enterpriseefficiency.com. Before that he was an Assistant Editor at MIT Sloan Management Review, where he covered a wide range of business topics including IT, ... View Full Bio
We welcome your comments on this topic on our social media channels, or [contact us directly] with questions about the site.
Comment  |
Email This  |
Print  |
RSS
More Insights
Webcasts
What We Can Learn from Sports Analytics
Making Cybersecurity Work in Small and Medium-Sized Businesses
More Webcasts
White Papers
How to Prioritize Risk Across the Cyberattack Surface
Seven recommendations for a Successful SD-WAN Strategy
More White Papers
Reports
Evolution of Ransomware Gangs
Building an Effective Cybersecurity Incident Response Team
More Reports

@Broadway0474- Ouch. That is a rough number. The worst part is that you can't get that valuable experience (not to mention money in the bank) back. If you're a manager and you interview a 25 year old who has struggled because of the economy for three year and has zero experience or someone who just got out of school, all thing being equal it might be tempting to go with the one with the fresher education. It is really rough.
Reply  |  Post Message  |  Messages List  |  Start a Board

David, you are correct, sir. I didn't dig up the latest, latest employment data. But what I did find: "Workers 25- to 34-years-old have an unemployment rate of 10.5 percent in October [2014], or more than double the 4.4 percent rate for Americans between 35 to 44, according to the Bureau of Labor Statistics."
Reply  |  Post Message  |  Messages List  |  Start a Board

@broadway0474- Well, one thing that seems to be a constant refrain is that Millennials were hit hardest by the recession because new hires are the first to go. I don't know if it is true, but I think they've got it as rough as everyone else.
Reply  |  Post Message  |  Messages List  |  Start a Board

David, if you believe in the power of millennials, and it seems like most everyone in the business world does now, you better be worried about those newly built homes. These millennials are out to take everyone's jobs, and experience only means that you cost more. Am I kidding? Only in part. Today's nice experienced homes will soon be the neglected foreclosed homes.
Reply  |  Post Message  |  Messages List  |  Start a Board

@TerryB- Yeah, i wouldn't see it working that way. I would see it more like people trying hard to get what they deserve at their own company and when they can't, finding something else. That headhunter market relies on people feeling super comfortable that if something didn't work, they could always find something else.
Reply  |  Post Message  |  Messages List  |  Start a Board

>>When the job market has a shortage of qualified unemployed folks, then the only way to get good people is to convince them to leave jobs they like.

I'm actually old enough to remember the days of headhunters calling 10 times a week. Even back then it was a crapshoot. Headhunters could give you general idea of salary range sometimes. But by far most successful ploy was just jumping job to job. You'd tell the new guy what you made currently and they'd bump you 5-10% to entice you. If you were really valued by your cuurent employer, they would try and match. Well, at least first couple times you pulled that on them.

It was interesting paradigm that evolved. The jumpers weren't usually the best or brightest, and certainly didn't give a rat's butt about the company. The valuable people didn't really have mindset to behave like that, they were committed to who they worked for. Big reason they were so valued, it was part of who they were.

So you ended up with a market where what you made was way out of whack with the talent you had. The IT crash after Y2K took care of most of those people, the change of technologies took care of rest. But that headhunter market that spawned the jumpers barely exists anymore. Seems doubtful things will get that hot again. But in internet age, maybe the Monster.com's of world provide that opportunity now? I could see niches get hot for awhile, then cool/disappear completely. Long term IT work is not for the meek anymore, your best quality better be adapting to change.

@Brian.Dean- Shh...we don't want to give enterprises any good ideas. We want to make them think throwing money at the IWeek community is the best way to stay ahead. :)

No, clearly you are right. We all need to do a better job of figutring out how to measure work and its value. Because if we do, we are far more likely to get a fair wage and the company is more likely to thrive to pay those wages.
Reply  |  Post Message  |  Messages List  |  Start a Board

@Broadway0474- That's a good analogy. The good news is that for an experienced IT pro, you don't have to worry about new homes being built. Sure, there are new IT Pros being built, but they all come into the market as less experienced than you. The biggest problem with long foreclosed homes is that people would rather have a new home than repair a neglected one.
Reply  |  Post Message  |  Messages List  |  Start a Board

@David, great article about the economy of IT workers. The numbers of variables are many and a worker should definitely plan carefully to create a long term sustainable flow of higher income. The worker has a finite amount of hours available that they can either spend towards work, business, education (future investment) and leisure time.

Firms also need to take into account many variables, and data should be collected to see whether their employees are substituting work with business activities (or education) to generate higher income or employees are substituting work with leisure activities, this data could help a firm maintain their skilled force for the long term by making the necessary adjustments.
Reply  |  Post Message  |  Messages List  |  Start a Board

David, there's been this talk for a couple years now that the job market is turning, that employees will soon have the power. It's sort of like the real estate market when it was flooded with all those foreclosed homes (is it still?). It's impossible for the un-foreclosed houses to get their full value on the market as long as there are all these desperate foreclosed homes out there. Likewise for the unemployed (declared in official stats or not) and the underemployed.
Reply  |  Post Message  |  Messages List  |  Start a Board
Page 1 / 2   >   >>
Editors' Choice
Hot Topics