IT Life Radio: An Alternative To University IT Programs - InformationWeek

How do you make an IT professional? For enterprises, that's a pretty important question, because we're not making enough of them.

In 2012, only 4% of Americans were graduating with science, technology, engineering, and mathematics (STEM) degrees. This report predicts that the US is going to be short 224,000 IT workers by 2018. Four-year computer science degrees are not drawing people, and they aren't making up for the lack of skilled IT workers in the US.

Ashu Desai and Make School have an alternative plan. According to Desai, one of the founders of Make School, the organization can turn out IT pros that are prepared for their professions in less time and for less money than a university. We'll talk about his plan Wednesday, April 22 at 3 p.m. ET on our latest installment of IT Life Radio.

Desai thinks that developers aren't getting enough hands-on experience or managing enough projects in college, and that their teachers are more interested in research than teaching. Desai speaks from his own experience: He dropped out of a college program when he realized he had learned far more from designing his own app than he was learning in school. After a few successful years as an IT pro, he decided to fix the problems he has seen.

According to Desai, Make School is designed to work more like a startup than a school. The "campus" looks like any office of a San Francisco startup. The students spend part of their day in lectures and some of it working on projects of their own. In other words, they get startup-type experience. The school helps students learn to take their ideas from conception to completion, and places a heavy emphasis on helping students get those applications in front of local companies.

The school has only had one graduating class so far, but most of those folks are working and some are making well above the average salary for developers coming out of college, according to Desai, and they're doing it in less time than it takes to get a four-year degree.

The kicker? There is no tuition. Make School has a different business plan. Instead of taking money from you before you've made any, they defer the tuition and then take a percentage of your salary in your first years after they get you a job. No job? No tuition. Too good to be true? Possibly.

We'll let Desai tell you more details before you decide. At the very least, the conversation should help us figure out how to build a better developer, and maybe help fix the IT skills gap. Listen and learn more about:

Come and ask Desai questions in the interactive chat that accompanies our live radio show. 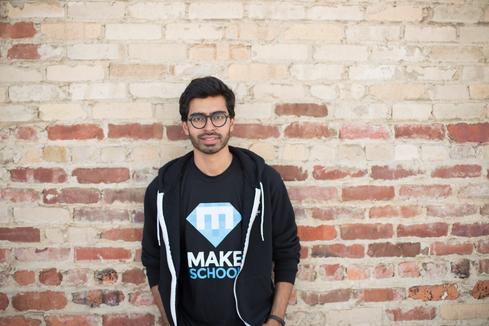 Tune in Wednesday, April 22, at 3 p.m. ET to find out whether you've wasted your whole college career.

David has been writing on business and technology for over 10 years and was most recently Managing Editor at Enterpriseefficiency.com. Before that he was an Assistant Editor at MIT Sloan Management Review, where he covered a wide range of business topics including IT, ... View Full Bio
We welcome your comments on this topic on our social media channels, or [contact us directly] with questions about the site.
Comment  |
Email This  |
Print  |
RSS
More Insights
Webcasts
Monitoring Critical Cloud Workloads
Disaster Recovery/Business Continuity in the New Normal
More Webcasts
White Papers
Zero Trust Journey + Approach Infographic
Why You're Wrong About Operationalizing AI
More White Papers
Reports
Future Proofing Your Network for 5G
Planning Your Digital Transformation Roadmap
More Reports