Lenovo Ideacentre Stick: The $129 PC In Your Hand - InformationWeek

Lenovo is rolling out the company's first compute stick -- the Ideacentre Stick 300. For $129 it transforms almost any HDMI-compatible TV or monitor into a Windows-based PC.

The device boasts an Intel Baytrial Atom Processor Z3735F, 2GB of memory, and 32GB of storage. It initially ships with Windows 8.1, but will be eligible for a free upgrade to Windows 10 starting July 29.

Other features of the Ideacentre Stick include WiFi and Bluetooth 4.0 connectivity. It can also be turned into a fully functioning PC when an optional 2.4GHz wireless keyboard and mouse are added.

The Ideacentre Stick 300 is currently available on Lenovo's website and hits retail stores in July. 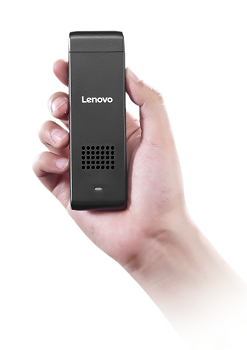 Lenovo, along with other PC makers, are watching traditional desktop fall as more and more people turn to mobile devices, especially smartphones and laptops, for their computing needs. The onslaught of these PC sticks is a way to reinvigorate an older form factor.

The release of Lenovo's PC-on-a-stick device follows Intel's launch of the Compute Stick, its version of a pocket PC that resembles a USB stick in size and weight. That item features a 64-bit quad-core Intel Atom processor with 2GB of RAM and offers two levels of storage capacity, 32GB and 64GB.

Other PC-on-a-stick competitors include the Google Chromebit, which also has the dimensions of an oversized USB thumb drive; the Raspberry Pi, a family of credit card-sized single-board computers that can run Windows or Linux; and the MeeGo Pad T01, launched in late 2014, which sports nearly the exact same specifications as the Compute Stick.

In addition to other features, Lenovo's Ideacentre Stick comes preloaded with software that includes a three-month trial of Microsoft Office 365. It includes an SD card reader, a Micro USB 2.0 port, and a speaker.

While it's not intended to be used as a full-blown personal computer, or one that can easily fit within an enterprise, the device could find favor with consumers looking for a PC that can fit almost anywhere and turn anything with an HDMI port into a bare-bones computer.

[Read about whether Windows 10 will be free or not.]

"We've looked at the computing needs of travelers, business people and families, and realized that a truly portable and affordable solution would be a significant benefit to users of all kinds," Jun Ouyang, Lenovo's vice president and general manager of worldwide desktop and visuals, wrote in a June 22 statement. "Our goal with the Ideacentre Stick 300 is to give those users a sense of freedom and enhanced mobility, while packing a serious punch in a small device."

While all the devices mentioned can be picked up by American consumers, they might not be the target market. Vineet Durani, Microsoft India's director for Windows Business Group, told the Economic Times of India that a stick might help improve penetration into emerging markets, where just 10% of households in the country currently have access to computers.

"We can position this stick PC as a cheap alternative to PC. In those areas, chances are that people might not have a PC but they certainly have a TV in their house," Durani told the paper.

Nathan Eddy is a freelance writer for InformationWeek. He has written for Popular Mechanics, Sales & Marketing Management Magazine, FierceMarkets, and CRN, among others. In 2012 he made his first documentary film, The Absent Column. He currently lives in Berlin. View Full Bio
We welcome your comments on this topic on our social media channels, or [contact us directly] with questions about the site.
Comment  |
Email This  |
Print  |
RSS
More Insights
Webcasts
Detecting and Preventing Insider Data Leaks
Hybrid Cloud: The Great Balancing Act
More Webcasts
White Papers
Why Add Security to Your Skill Set and How to Do It
Data Orchestration: Critical Elements for Data Strategy and Infrastructure
More White Papers
Reports
Enabling Enterprise Resiliency Through Cyberthreat Detection
The State of DevSecOps Report
More Reports

Love the PC on a stick idea. I will actually consider being an early adopter of the Lenovo one. For $129, why not? If any manufacturer gets it right it would be Lenovo.
Reply  |  Post Message  |  Messages List  |  Start a Board

As you point out, Nathan, this is actually becoming somewhat of a crowded market. At almost identical specs and prices, I'm having a hard time seeing what sets the Ideacentre and Intel's ComputeStick apart (micro USB vs full USB, for one). It looks like MeeGo is even rolling out a more comparable product, fittingly called the  Pad T02. At a slightly smaller stature and slightly lower price point, I suppose the chromebit fits a slightly different niche. Since you mentioned Raspberry Pis, one might even say the Ideacentre is competing with set-top media centers like Apple TV or Roku, or lower-end gaming-focused devices like the Ouya - though things like Google's Chromecast and Amazon's Fire TV stick may be in a different category altogether,

What this all amounts to is that consumers have lots of options for low-priced devices to plug into their TVs. I think this is a great thing. I remember being young and begging my parents for my first PC for years and years, but they were always too expensive. Now, young people even less fortunate than I was (that 10% number for India is disheartening to me) can get their feet wet with machines much more powerful than anything I had. We talk a lot about the 'Maker Movement' on here - young people growing up well-rounded and inquisitive about how technology can change the world around them. This is a piece of that puzzle. Meanwhile, the entertainment value of having one in the living room can bring families of all types together. Good news for everyone.
Reply  |  Post Message  |  Messages List  |  Start a Board

As much as I think this is a great movement towards mobile computing (yes, we have smartphones, and even smaller devices like Raspberry Pi's) I worry about how these can be altered to be used as malicious computers used to exploit security flaws such as unrestricted ports on monitors or TVs.  Sadly whenever there is a movement towards creating something that could benefit many (think of being able to use these in lower income areas or in education situations where users can bring them in and use them with monitors at libraries or other computer labs), there are always folks who want to use them for nefarious reasons.
Reply  |  Post Message  |  Messages List  |  Start a Board

Good question it would be great if the technology evolved to the point of using any screen monitor . That would offer the most flexibility for Pocket PC .
Reply  |  Post Message  |  Messages List  |  Start a Board

"We can position this stick PC as a cheap alternative to PC. In those areas, chances are that people might not have a PC but they certainly have a TV in their house,"
This may be right, nonetheless, the real question is, how many of those TVs have an HDMI port? Are all of them or the majority Plasma or LCDs?
Reply  |  Post Message  |  Messages List  |  Start a Board

The only trouble is that as of now, you'd have to carry an led monitor around with you for it to be useful. Those are, of course, as big as laptops.
Reply  |  Post Message  |  Messages List  |  Start a Board

These do look very promising, is anyone using one today that can comment on how it works day to day. I would love to try doing my day to day tasks with one to see how it compares to my laptop experience or tablet experience. The portability possibility is so exciting.
Reply  |  Post Message  |  Messages List  |  Start a Board

These PC sticks are truly amazing devices. Too bad Google Glass and similar devices have fallen out of favor. Imaging the convenience of hooking this device to Glass, and using it in conjunction with a foldable keyboard. It would be a PC that could, literally, be carried in my back pocket
Reply  |  Post Message  |  Messages List  |  Start a Board
Editors' Choice
Hot Topics