Leonard Nimoy inspired several generations of IT pros, engineers, and scientists with his iconic Mr. Spock character on Star Trek.

As Mr. Spock would say, it would be illogical for IT Life not to cover the passing of the great Leonard Nimoy, 83. The man inspired several generations of IT professionals, engineers, dreamers, astronauts, artists, and peacemakers. For a man who played a character of pure logic, he sure spawned a lot of emotion in us.

It is so difficult to separate Leonard Nimoy from Spock that even when he tried with his own autobiographies, he titled one I am Not Spock and the second one I am Spock. Nimoy was, by all accounts, highly passionate, a writer of poetry, a photographer, and very spiritual. Nimoy is quoted as saying, "I'm touched by the idea that when we do things that are useful and helpful -- collecting these shards of spirituality -- that we may be helping to bring about a healing."

That doesn't sound very Spock-like, and yet in many ways it is. Remember that Vulcans have deep wells of emotion that they have learned to control. And Spock, being half human, was always the one to slip in a little humanity within all the logic. The great moments of Spock's character always appeared when logic took a back seat for a moment. We were just as ready to believe in Spock as an analyzer of probability as we were to accept him as a being who communicated with whales. Perhaps Spock's greatest line was one of his last, "Logic is the beginning of wisdom, not the end."

Nimoy imbued Spock with such heart that, rather than becoming a source of mechanical or robotic boredom, he became the emotional center of the story. While Capt. Kirk pontificated and puffed across the screen, Spock showed us the moral center, the reason it all mattered. With a few logical turns of phrase, Spock pushed Kirk to places he never wanted to go, to think in ways he never wanted to think, to act on his better nature.

It wasn’t just Star Trek. Nimoy kept pushing the boundaries with In Search of ..., a TV series you have to be a certain age to remember. In Search of ... explored the paranormal and alternative theories to history. It seems odd, in retrospect, that someone who devoted his time to a character dedicated to science would spend so much time talking about Big Foot and UFOs. But, to Nimoy, it must have been about the same thing -- exploring the unknown. In Search of ... spawned a generation of conspiracy theorists, but it also spawned people like you and me, people who wanted to know things, ask questions, and seek alternative answers.

Take this clip as an example. This is an episode about how asteroids will destroy the earth, but the Star Trek spirit was alive and well in the clip as seen through the eyes of scientists and astronauts:

And let's not forget the artist Leonard Nimoy. Let's just call that career hit or miss. There were wonderful hits that I can't show here like these Nimoy's beautiful nudes that were part of his long photography career.

But hey, let's give Nimoy credit for writing the second-best Tolkien-inspired song. No one beats Led Zeppelin's "Ramble On" anyway.

Taken together it was a long and wonderful life. One can't escape saying that he lived long and prospered. And we prospered because he was here. One only needs to look at the flip-phone and the Star Trek communicator to see how Star Trek inspired a generation of engineers. There are countless more examples. 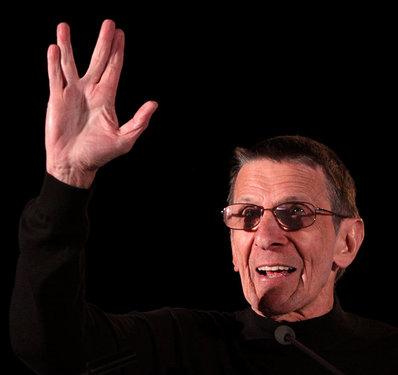 We may have lost him, but he leaves behind a legacy of great shows and a greater impact on us. We will miss him, but he'll never really be gone. He is immortalized in film in giant databases inspired by those he accessed from his seat in the Enterprise. Thankfully, we already have gotten a chance to eulogize him once as he died on screen. Kirk says it of Spock, but I’m pretty sure Shatner and all of us would say it about Nimoy: "Of all the souls I've encountered in my travels, his was the most human."

David has been writing on business and technology for over 10 years and was most recently Managing Editor at Enterpriseefficiency.com. Before that he was an Assistant Editor at MIT Sloan Management Review, where he covered a wide range of business topics including IT, ... View Full Bio
We welcome your comments on this topic on our social media channels, or [contact us directly] with questions about the site.
Comment  |
Email This  |
Print  |
RSS
More Insights
Webcasts
Take DevOps to the Next Level
Using MS Teams as Your Phone System - FREE Event 4/14
More Webcasts
White Papers
2020 SANS Enterprise Cloud Incident Response Survey
The Top 5 Mistakes Everyone is Making in Vulnerability Remediation
More White Papers
Reports
Are We Cyber-Resilient? The Key Question Every Organization Must Answer
Building the SOC of the Future
More Reports

@zerox203- I hadn't thought of that, but you're right. The Star Trek wikis really add a sense of reality to all of it. My favorite thing about Star Trek is how many people are inspired to literally create the world they've seen. I bet we could get a few million people willing ot make San Francisco the seat of galatic government. :)
Reply  |  Post Message  |  Messages List  |  Start a Board

@JIMPRO- I can't think of one. But it looks like some of the Star Wars characters might be the next to challenge it. We'll see how many sequels include Luke, Leia, and Han. Though there is a rumor they all die in Episode VII, I can't imagine that they could kill them all without people burning down the theaters.
Reply  |  Post Message  |  Messages List  |  Start a Board

@TerryB- I have to say the geek in me just swells with joy every time I see Data do the Vulcan neck pinch in the Next Generation crossover and Spock says, "Not bad."

People often comment about how TV was "better" back before cable. I don't know if it is better or worse, but one of the advantages o having only three channels was that the competition to get on the air was higher. You couldn't just get turned down by the networks and then sell your crummy idea to cable. It had to be among the best 70-100 shows on TV.

What is astounding then is how many crappy shows they still made. :)
Reply  |  Post Message  |  Messages List  |  Start a Board

@David the system won't let copy the whole thing. I've tried numerous times. One of the popular tweets yesterday combined the two by postin a pic from TOS with the Captian in his gold shirt and Spock in his blue and this: from @garywhitta The only blue and gold that matter today.
Reply  |  Post Message  |  Messages List  |  Start a Board

@tzubair- I think it was Nimoy that convinced William Shatner that Trekkie conventions were wonderful to do. Shatner has always had a different relationship with Star Trek than Nimoy. While both did other things, Shatner was a bigger name already when he played Kirk. And he has several more other big shows. Nimoy was so good at playing Spock, it was hard to see him as something else. Ultimately he embraced that as his legacy in a way Shatner never has. It makes it easier for him to love his fans.
Reply  |  Post Message  |  Messages List  |  Start a Board

Thanks to everyone telling me it was a nice tribute. It was a hard thing to sum up a man's life in 700 words, especially his life. I'm glad I did him some credit.
Reply  |  Post Message  |  Messages List  |  Start a Board

@Ariella- I have no doubt. What is interesting about Star Trek is that it produced three (at least) stars who continued to be relevent long after the show, and were especially popular on social media, something which wasn't even close to being invented when the show came out. Shatner, Takei, and Nimoy transcend generations.
Reply  |  Post Message  |  Messages List  |  Start a Board

Thanks, Charlie. I like how you said he extended himself. He truly did. One of my favorite stories about that is that at some point he entered into a contract (that I think he later regreted) that did not permit him to sign autographs for anyone but the company. He used to have to say to fans that he couldn't sign anything without breaching the contract. But then he'd say to them, "But I like hugs." And then he'd hug them and let them take pictures.

We know of many celebrities who don't like to be touched (and for many there's a good reason). I always thought that was such a wonderful gift he gave to fans since he couldn't give them a signature. For most, I suspect it was more memorable.
Reply  |  Post Message  |  Messages List  |  Start a Board

Nice piece on the meaning of Nimoy's life, Dave. He was one of my favorite Star Trek characters, keeping what could have been runaway silliness from getting out of hand. If left to Capt. Curt, who knows how some of those episodes would have turned out. I remember seeing Nimoy at an event at the Children's Museum in Cambridge, Mass.,, aimed at interesting children in science. He extended himself in many ways.
Reply  |  Post Message  |  Messages List  |  Start a Board
Page 1 / 2   >   >>
Editors' Choice
Hot Topics

Does Identity Hinder Hybrid-Cloud and Multi-Cloud Adoption? Joao-Pierre S. Ruth, Senior Writer,  4/1/2021
White Papers
2020 SANS Enterprise Cloud Incident Response Survey
The Top 5 Mistakes Everyone is Making in Vulnerability Remediation
Identify Threats 82% Faster: The Value of Threat Intelligence with DomainTools
The Five Major Security Pitfalls of WFH and How to Solve Them
What is Pure Signal RECON?