50%
Tweet
Microsoft has spent a fortune on product placement, often with hilarious results.

makes a few appearances, along with Puma shoes, a Nokia smartphone, and a gaggle of others. But in a movie with an almost satiric surfeit of product placement, nothing stands out as much as the virtual-reality version of the Xbox that appears early in the film.

The idea is kind of cool, but the execution isn't. The Xbox setup looks more like a shrine to its own brand than an actual product. It includes not only essential gaming hardware, but also a giant "Xbox" sign replete with neon green lasers that are probably visible from a mile away. 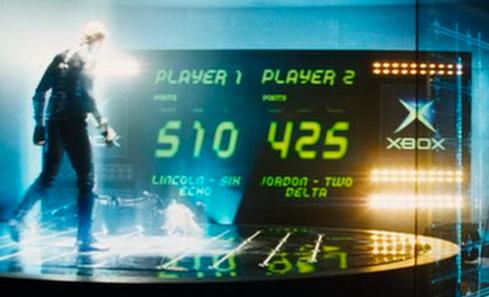 The scene also exposes holes in the film's internal logic. The characters using the Xbox are clones who've been misled to believe most of the world was contaminated in some kind of disaster. These clones are basically prisoners with no notion of commerce or popular products -- so to whom is all the branding within their facility supposed to appeal? The answer, of course, is that the product placement was supposed to appeal to us, the audience. It's debatable whether that happened. Despite being one of Bay's more coherent movies, The Island is also his biggest box office flop.

2. Elementary
Elementary is CBS's modernized take on Sherlock Holmes. Periodically, it also morphs into an ad for Microsoft's Surface tablets. In the clip below, for example, is there any narrative reason for the show to cut to a close-up as the hero snaps together his TypeCover and tablet? Or for the subsequent cut to another, even closer angle as Sherlock adjusts the device's kickstand? Nope, zero, zilch, none. The Surface is basically there to draw attention to itself, nothing more. The cameo lasts only a few seconds, but it's awkward enough to disrupt viewers' investment in the story -- one of the worst things product placement can do.

3. Suburgatory
Think the Surface spot in Elementary was blatant? Check out this one from recently canceled ABC sitcom Suburgatory. Following a temporary rift with friends, a teen turns to her shiny new Microsoft tablet for solace. "It's a really personal tablet, with a full-size USB port and an integrated kickstand," she says while trying to reconcile with one of her friends. The scene is almost cute, given that she rattles off specs in a feeble attempt to insinuate she doesn't need friends, because the tablet is good enough. Almost cute.

4. Hawaii Five-O
Remember when I asked if you'd ever heard someone suggest you "Bing it" instead of "Google it"? I have. But unfortunately for Microsoft, most of the people I hear saying it are making fun of this clip.

Notice that just like the Surface in the Elementary episode, each of Hawaii Five-O's shots of a Windows Phone device lasts a few seconds longer than it should -- just long enough to seem awkward, instead of like a part of the story.

Talking to the car you drive looked like a futuristic technology 15 years ago. Now, it is here. MSFT should find a nice (and sneaky) way to show better demonstration in movie/TV shows. I still long for the Audi that Will Smith dronv in I,Robot. When are we goign to have one like htat in market?
Reply  |  Post Message  |  Messages List  |  Start a Board

In my opinion, Microsoft (via Ford) came off better in the "Sync" ads of recent years. I have done much eye-rolling over Hawaii Five-o as well... but before taking pity on the poor actors saddled with gems like "let's bing it" consider they do get to live in Hawaii! Could the ad agency be the culprit? Elementary and H5O are both CBS shows. Maybe Microsoft needs to try Sterling Cooper and Partners ad agency, I hear they're very good.
Reply  |  Post Message  |  Messages List  |  Start a Board

While Microsoft's product placement strategy is still easy to make fun of, I have to give them credit for their straight-ahead ads and commercials, which have gotten a lot better in the last year. Early Surface ads were a mess; they didn't communicate anything about how the device is used or why someone might want one. But the Surface Pro 3 spot is actually pretty slick. And Microsoft's Super Bowl commercial was pretty inspired-- up there with some of the better Apple and Google ones.
Reply  |  Post Message  |  Messages List  |  Start a Board

Nice example,  Number 6. We could probably do another list of products that were scrapped shortly after appearing in TV shows and movies.

I don't watch that show, but have seen quite a few Windows phones -- on TV programs at least!

This has nothing to do with tech, but I caught a few (awful) minutes of Rizzoli and Isles, and one of them came hope, took off her heels, and put in a Dr. Scholl's gel. Ridiculousness squared. I think she was about to start talking about the gel, but I turned the channel.
Reply  |  Post Message  |  Messages List  |  Start a Board

It's fun seeing placed products that have since failed. The perpetually rerun NCIS on the USA Network has a couple episodes where Abby uses her Ojo videophone to talk with a colleague. Despite lots of hype and a few near-collapses, Ojo developer WorldGate finally filed for chapter 7 bankruptcy in 2012.
Reply  |  Post Message  |  Messages List  |  Start a Board

Has anyone noticed the Surface placement in Grey's Anatomy?
Reply  |  Post Message  |  Messages List  |  Start a Board

There's also Under The Dome. Almost everyone in Chester's Mill uses a Windows phone. Far fetched even by Stephen King standards.
Reply  |  Post Message  |  Messages List  |  Start a Board

I noticed the Surface placement in Elementary, the only show/movie you mention that I've seen (other than that long, dull Google commercial, 'The Internship' -- hey, we were on vacation, it was raining, and we had about eight TV channels, five of which were sports!). In Elementary, the product placement was really awkward, jarring, and awful; I realize brands have a tougher time these days, given more people watch shows via DVR, thereby skipping commercials, but surely there's a cleverer way to integrate a tablet's capabilities into a detective show? You'd think they could watch a surveillance video and zoom in on a clue, video-chat with a witness, or take their own photo or video of a crime scene or something. Heck, I don't know. I write about tech, not crime, but I think most tech writers could do a better job of coming up with realistic dialog than we've seen surrounding these products in recent entertainment offerings! I'm game to give it a try! :)
Reply  |  Post Message  |  Messages List  |  Start a Board
Editors' Choice
Hot Topics