Autonomous and connected cars were spotlighted at this year's Mobile World Congress. With 44 million of these vehicles expected to hit the road by 2030, tech companies such as Nokia Networks and Qualcomm are joining car manufacturers to roll out state-of-the-art features.

BARCELONA -- Mobile World Congress is widely regarded as the tech event where smartphone manufacturers and telecom carriers gather to show off the latest devices and innovations in networking, communications, and mobile hardware. This year, however, the connected car and all that comes with it made a significant splash at the show, with many people predicting that in less than 15 years, these vehicles will be commonplace.

By 2030 there could be as many as 44 million autonomous and connected cars on public streets and highways, according to GSMA, the group that organizes MWC. At the show this year, analysts predict that connected and automated vehicles will make a huge economic impact, with the market hitting its stride between 2030 and 2035.

However, signs of the future are already here. In Europe, for example, new laws are mandating connectivity in all new cars and light vans starting in March 2018. In addition, vehicles must be equipped with "eCall," an emergency notification system, which is part of a European Commission initiative. The goal is to help drivers, police, and emergency workers respond more rapidly to car accidents.

Additionally, the connected car is creating new jobs across the automotive industry. The vehicles promise social benefits, such as increased fuel-efficiency, lower environmental impact, a reduction in traffic congestion, and a higher level of comfort for drivers.

The Race for Connectivity

At MWC, carriers and car companies were eager to show off the future today.

"The network can guarantee that the traffic as a whole flows seamlessly; this is something you won't achieve if you put just sensors in the car," Volker Held, head of innovation marketing at Nokia Networks, told InformationWeek.

Recently, Nokia had a successful live trial of its 5G technology at the A9 high-speed motorway in Germany.

"The cloud server gets the position, direction, and speed of the cars. All the functions are virtualized using NFV technologies," said Rainer Liebhart, research project manager at Nokia Networks. Liebhart added that the autonomous driving low-latency application was developed with the help of two universities in Budapest and Dresden.

Fully Autonomous Car of the future

Qualcomm and Mercedes-Benz have partnered to bring life to the 2016 Mercedes F 015 self-driving car.  A fully functional autonomous luxury car, this Mercedes could reach the market by 2017, but don't expect to see parking lots full of them until at least 2030. 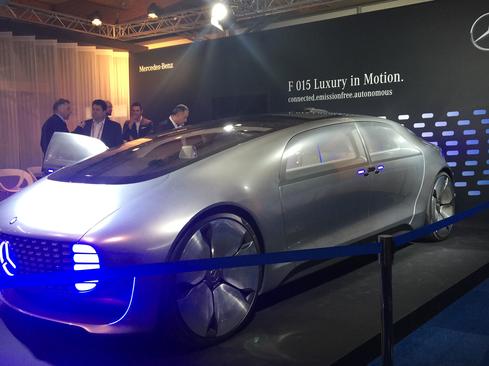 The Mercedes F 015 exterior is designed with cutting-edge technology. Powered by hydrogen fuel cells, it features rear-hinged doors that open up and outwards to 90 degrees, 26-inch alloy wheels, and aluminum-encased windows.

This masterpiece of engineering combines the best state-of-the-art technology with an impeccable stylish and classy aesthetic design.

The interior is a mixture of white Nappa natural leather, timber, glass, and metal. Six high-resolution display screens have been incorporated into the rear and side panels, which can be controlled through touch, gesture command, and eye tracking. Advertised by the German automaker as "The best, or nothing," this is the best autonomous car at MWC, without a doubt.

About two-thirds of the cars sold in 2015 have Bluetooth inside, said Aberle. "A cellular LTE connectivity is becoming more and more prevalent, WiFi within the car has been embedded like mobile hot-spots within the vehicle, 3D navigation, real-time traffic, things like remote diagnostic and self-diagnostic, LTE is already enabling connections from the cloud to the vehicle, and Bluetooth allows your car to interact with your devices in the car," said Aberle. "In the future, the car is going to be connected to everything."

Indeed, cars will be able to communicate with other cars, with pedestrians, and with the infrastructure. "The car will become a mobile platform," said Aberle.

Susan Fourtané is a Science & Technology journalist, writer, and philosopher with a life-long interest in science and technology -- and all things interesting. She has been a technology journalist for nearly 10 years writing and reporting for global print and online ... View Full Bio
We welcome your comments on this topic on our social media channels, or [contact us directly] with questions about the site.

Brian, the aerodynamics in the Mercedes F 015 is also because the car is powered by hydrogen fuel cells. You wonder if they will make a come back. I would say that since the technology in the Mercedes is the best of the best there is problably a reason. :) /Susan
Reply  |  Post Message  |  Messages List  |  Start a Board

Brian, NASA also uses hydrogen fuel cells to power the shuttles' electrical systems. One benefit of this is that the crew can drink the clean byproduct> clean water. /Susan
Reply  |  Post Message  |  Messages List  |  Start a Board

in the case of connected and autonomous cars the security comes in the networks and solutions that make the connectivity possible.

What car manufactures have to watch is the security protection against cyber-attacks and intrusions, which cause malfunctions, or threten the physical integraty of the driver or pedestrians.

Software and connectivity for connected and autonomus vehicles will become more critical. Safety and security telematics will play an important role, thus, they need to be enhanced since the start. Security vendors are taking care of this.

Would you buy a totally autonomous car which has option of manual mode as well. or you would be happy with a car with some connectivity? :)

The use of scanners? What exactly do you have in mind?

I am happy you have addressed this question. :) Indeed, as you did, I thought about this as well. I think you have missed the second page of the story, here is the link: http://www.informationweek.com/it-life/mwc-2016-paves-path-for-connected-cars-/a/d-id/1324462?page_number=2 < - Connected cars and Formula 1

British F1 driver Lewis Hamilton doesn't think they will replace drivers in motorsports. :) After you read the second page, let me know if you have questions.

Maybe not yet. But you never know.

According to the conversations I have had at MWC with the companies like Nokia Networks providing 5G and network services for IoT, M2M, connected cars, etc., they say these networks are being built with enhanced encrypted security.

These cars need to have a different kind of security, stronger than what smartphones have, because they could be used as potential weapons. Just imagine that someone thinks of crashing a car like they crashed the planes into the WTC in New York. :/

Do you mean the option of buying a car with all the connected features disabled and then enable them as you think is convenient for you? Something like that?

It's not their fault if they are getting all the attention. It's not an easy topic either. However, I think I am on Apple's side. The company has shown consistency about how they treat privacy, which is a good thing.