See what the team on Discovery Communications' TV series Mythbusters learned when they tested the safety of drones. The results might make you lose your head.

Whenever we cover drones on InformationWeek, a commenter inevitably brings up the idea that they might be unsafe. Whether we're talking about drones for package delivery, a city using drones for new tasks, or even California passing a law saying first responders can shoot down drones, the conversation in our comments section inevitably turns to killer drones raining from the sky.

Any new technology brings a bit of uncertainty, and it seems like we're not alone with our fears. The duo on Discovery Communications' TV series Mythbusters decided to test whether the spinning blades of a drone could kill a person.

More specifically, Mythbusters hosts Adam Savage and Jamie Hyneman wanted to find out if the blades of a drone could cut through the neck and potentially pierce the jugular vein, causing someone to bleed to death. We know some drones can cut people, because we've seen singer Enrique Iglesias cut his hand badly on a drone. Could that turn deadly? 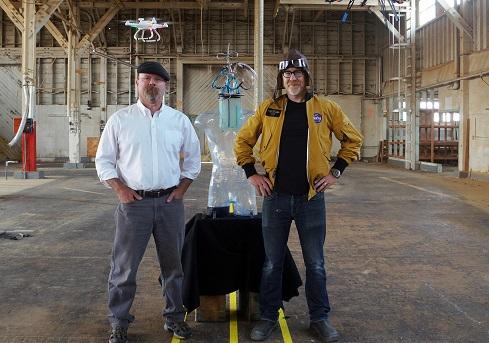 Of course, Savage and Hyneman were short on volunteers willing to stick their necks out even in the name of science. So they had to make a neck substitute. First, they tried a chicken, but to make sure they really got the sense of a human neck, with its bleeding veins and arteries, they used ballistics gel and tubes to create an artificial circulatory system. The ballistics gel, with a few modifications, can respond with the same basic resistance of human flesh and muscle. You can watch the artificial neck being made here:

Looks fun, and it would be nice to have some extra veins the way the model does, you know, in case you get hit by a drone.

The rest of the experiment was shockingly simple. Savage and Hyneman flew drones of various sizes into the fake neck to see what happens. A lot of drones, especially those with foam or light plastic blades, bounced off the neck. It is clear that a lot of drones are designed specifically to be safe around people, especially those sold commercially.

When the Mythbusters duo moved up to an industrial drone designed to hold a camera, things got interesting. The video involving the artificial neck is underwhelming. Instead, check out what it (actually just one blade on a stick) does to a chicken:

I don't know about you, but I'd rather not have my neck turned into nuggets. The result was the same with the ballistics-gel neck, with some spurting blue blood for effect (but far less spectacular than it sounds).

[ Will these tests change the public's opinion on drones? Read Drone Study Shows Consumers are Ready. ]

The Mythbusters verdict? Plausible. With the right blade hitting the right spot, you could get unlucky and die if medical help didn't arrive quickly. Fair enough.

Let's point out a few things. Your neck is a tiny target protected by your chin and collar bone. It took the Mythbusters team several tries to hit the small target area. Presumably, if something is coming for your neck, you are looking at it and able to move. So chances of a direct hit are low.

Also, if your jugular is cut, it doesn't mean you die instantly. There are examples like this 1993 case where a woman cut her neck on broken glass, and her family was able to apply pressure on the wound until medics could arrive. The cut was a gruesome two inches long and one inch wide. How long you can live after a major vein or artery is cut varies greatly on the size of the wound and how quickly you can apply first aid.

Basically, the Mythbusters are counting on a tiny target area getting hit straight on and no one being there to help you. Fair enough, and that's why this possibility was ranked by the Mythbusters team as "plausible" rather than "confirmed."

It seems the larger threat to human life comes not from the blades of the drone, but from the potential force generated by a 25-pound to 50-pound drone dropping from the sky and smashing your skull.

At any rate, the Mythbusters are right. It is possible. Perhaps some changes in design or rules might need to be put in place. What do you think? Are drones really killer death machines, or is that just a myth?

David has been writing on business and technology for over 10 years and was most recently Managing Editor at Enterpriseefficiency.com. Before that he was an Assistant Editor at MIT Sloan Management Review, where he covered a wide range of business topics including IT, ... View Full Bio
We welcome your comments on this topic on our social media channels, or [contact us directly] with questions about the site.
Comment  |
Email This  |
Print  |
RSS
More Insights
Webcasts
Disaster Recovery/Business Continuity in the New Normal
4 Practical Tips for Building a Data Lake
More Webcasts
White Papers
Top Serverless Security Risks and How to Mitigate
Ransomware Security Breach Summary: Food Production
More White Papers
Reports
Intelligent Outcomes Are Key to Business Resilience
[Report] 2021 State of IT & SecOps
More Reports

@asksqn- I actualy think you made my point for me. How many people are playing hockey or lacrosse every day? More than the number of drones int he air, I'm sure. Canada alone has 650,000 registered hockey players as in people who play in a league not jsut pickup. In the entire history of professional hockey in every country at every level there have been 10 on ice deaths and none were of the result of cuts. All were head injuries from falls, spinal injuries from hits and one intentional attack in the Italian league.

The rate for hockey is lower.

How far are we from 100,000 drones flying for a year and will even that many die? How long before we get to the millions playing hockey and lacrosse?
Reply  |  Post Message  |  Messages List  |  Start a Board

@whoopty- Well, they do fail when they run into something. In every test they condusted, it seemed like the motors on one or more rotors stopped when they hit something. I assume this is a safety feature, but it does mean bumps cause crashes.

I honestly think they're pretty darn safe. It is just interesting, because we've got this new thing we need to form rules around both social (like the fire situtaion in California) and physical.
Reply  |  Post Message  |  Messages List  |  Start a Board
InformationWeek Is Getting an Upgrade!