Augmented reality headsets, 3D printers and virtual reality (VR) cameras used to be the stuff of science fiction fantasy, but some of the world's leading technology companies, including Nokia, are turning visions into reality.

The Finnish company -- better known in its past life as a manufacturer of mobile phones -- is launching the OZO, a commercially available 360-degree spherical VR camera designed and built for professional content creators.

"OZO aims to advance the next wave of innovation in VR by putting powerful tools in the hands of professionals who will create amazing experiences for people around the world," Ramzi Haidamus, president of Nokia Technologies, wrote in a July 29 statement. "We expect that virtual reality experiences will soon radically enhance the way people communicate and connect to stories, entertainment, world events, and each other. With OZO, we plan to be at the heart of this new world."

The platform made its first appearance at an industry event in Los Angeles attended by representatives from major film studios and production houses, as well as media and technology companies. It was developed at Nokia's research and development facilities in Tampere, Finland. 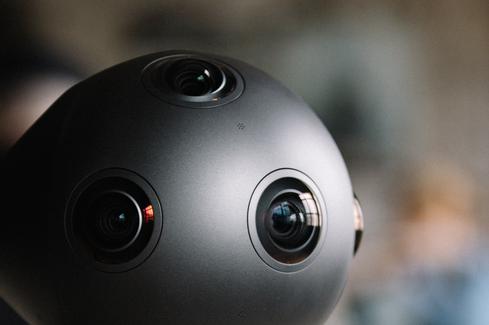 Video and audio content filmed using OZO can then be published for consumption on VR hardware like head-mounted displays (HMDs). The platform also works with third-party tools.

Another feature of OZO is real-time 3D viewing, a playback solution where the software removes the need to pre-assemble a panoramic image.

The company has also partnered with Jaunt, a VR production company based in Palo Alto, Calif., that specializes in the software, hardware, tools, and applications to enable the creation of cinematic VR.

Jaunt said it would support the development of OZO by providing the camera for use in its studios and by supporting content produced with OZO through its post-production services.

Nokia is not the only player in the 360-degree camera market, however.

At this year's at Google I/O developer conference, GoPro announced it is building a similar camera array for stereoscopic, spherical content capture that could then be displayed on VR headsets.

Also in July, a Federal Communications Commission's filing by Google indicated the company might be giving it another go on its failed smart glasses project, Google Glass.

Glass is a head-mounted wearable computer developed by the company enabling users to communicate with the Internet through natural-language voice commands or by tapping and sliding on the frame.

Nathan Eddy is a freelance writer for InformationWeek. He has written for Popular Mechanics, Sales & Marketing Management Magazine, FierceMarkets, and CRN, among others. In 2012 he made his first documentary film, The Absent Column. He currently lives in Berlin. View Full Bio
We welcome your comments on this topic on our social media channels, or [contact us directly] with questions about the site.
Comment  |
Email This  |
Print  |
RSS
More Insights
Webcasts
Unifying Your Endpoint Security Strategy
Fact or Fiction? The Truth About Cloud Native Security
More Webcasts
White Papers
Ransomware, the Exploding Cyber Threat
How to Build Your Incident Response Plan
More White Papers
Reports
Increased Cooperation Between Access Brokers, Ransomware Operators Reviewed
SANS Institute Survey: The State of Cloud Security
More Reports