A survey tackles the benefits and challenges of life as an on-demand worker in the 1099 economy.

10 Ways IT Drives Everyone Else Crazy
(Click image for larger view and slideshow.)

The 1099 economy, also known as the on-demand economy and the sharing economy, offers less flexibility than workers expect, according to a survey released Wednesday by Requests for Startups.

While the survey focused on four on-demand industry segments that are not specifically tech-related, the findings reflect a level of worker dissatisfaction that is worth considering for IT organizations that are relying heavily on contractors instead of full-time staff.

To understand more about the dynamics of on-demand work, for workers and companies, Jiang, Choi, Madan, and Saluja conducted a survey of 1,330 individuals involved in four on-demand industry segments – ridesharing, manual labor, delivery, and passive income (e.g. AirBnB). The demographics of the respondents – 72.7% male, 57% white, 67% ages 18-34, 65.7% single, and 49.4% college graduates – are noteworthy because they suggest some limits to the appeal of on-demand work.

On-demand work also comes with enough challenges and uncertainties that almost half of survey respondents (48.5%) anticipate working as an independent contractor for two years or less, with low pay being the most common cause of attrition.

Pay for on-demand services is highly variable, and workers who put in long hours can boost their earnings. But the numbers cited by on-demand companies aren't necessarily what workers see. Uber, for example, recently published a blog post stating that average gross dollars per hour for its drivers was $20.97 in March 2015. It subsequently noted what drivers actually see after fees: "In March 2015, average net $/hour works out to $15.41/hour." Emily Guendelsberger, a reporter for Philadelphia City Paper, said she earned $9.34/hour during her time undercover as an Uber driver.

Yet the percentage of workers participating in the 1099 economy – so named because the 1099 Form is used to report self-employment earnings to the Internal Revenue Service – is expected to increase.

"We can't deny that our traditional definition of 'work' is changing, so we need to start thinking ahead about the implications of this change," said Pearl Chan, principal in investments at Omidyar Network, in the report. "Within the on-demand economy, we continue to be excited about entrepreneurs building companies that can help workers have a satisfying career and be positioned for long-term success."

In 2010, contingent workers – temps, contractors, and freelancers – accounted for 25% to 30% of the US workforce, according to research published by Intuit (which happens to sell software and services relevant to this group). As of September 2014, that figure was 34%, according to a report from the Freelancers Union, a nonprofit organization, and Elance-oDesk (now known as Upwork). By 2020, Intuit's data indicates the percentage of contingent workers will reach 40%, assuming litigation doesn't derail the trend line.

That's a real possibility. Uber and Lyft, popular ridesharing companies, face legal action in California challenging the way they classify their drivers – as independent contractors instead of as employees. An adverse decision could force the companies, and others like them, to provide benefits to their on-demand workers, making their services more expensive and less disruptive to traditional car service operations.

For the time being, though, the on-demand economy appears to be thriving. New on-demand services keep sprouting up, such as Filld and Purple Delivery, which promise to deliver gasoline on-demand to cars. At Filld, however, drivers are employees and are eligible for benefits, according to a company spokesperson. So not all companies offering on-demand services seek to avoid labor costs.

In a phone interview, Madan said the only funding received for the survey was used to buy 20 $100 Visa gift cards offered as prizes to respondents. Some of the more than two dozen companies and organizations acknowledge in the study contributed to that funding. 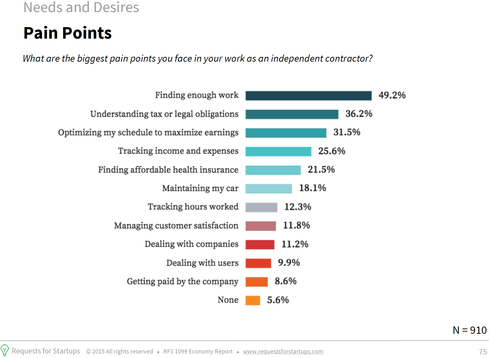 According to the survey, on-demand workers hear about gigs most frequently from their friends (53.3%), followed by Craigslist posts (21.2%). The most-cited reason for working with an on-demand company is "greater schedule flexibility" (74.9%), followed by "higher pay than other options" (46%), and "greater enjoyment from the work" (36.1%).

Yet pay and satisfaction appear to be less than expected. Respondents cited "insufficient pay" (42.9%) and "lack of work enjoyment" (36.9%) as the top two reasons for leaving on-demand jobs. And more than half of respondents (50.6%) indicated that they intended to leave contract work after a year.

A frustrated desire for flexibility may contribute to worker dissatisfaction. The survey notes that contractors' schedules are most frequently determined by peak hours and peak demand in their line of work. The report said this suggests "that schedules may not in fact be as flexible as perceived."

Those who define flexibility as a lighter work schedule appear to be contributing to their own dissatisfaction. People who work the fewest hours report the most difficulty finding work, which happens to be the most common pain point, cited by 49.2% of respondents.

The report suggested there are a number of opportunities for companies to address problems faced by contract workers – other than hiring them full-time – such as schedule optimization, income and expense tracking, time tracking, and finding insurance.

"A surprising 8% of ridesharing workers and 16% of delivery workers that drive for their jobs do not have car insurance," the report said. "More than a quarter of these workers ... do not have health insurance."

According to Gallup, the percentage of US adults without health insurance fell to 11.9% in first quarter 2015.

Thomas Claburn has been writing about business and technology since 1996, for publications such as New Architect, PC Computing, InformationWeek, Salon, Wired, and Ziff Davis Smart Business. Before that, he worked in film and television, having earned a not particularly useful ... View Full Bio
We welcome your comments on this topic on our social media channels, or [contact us directly] with questions about the site.
Comment  |
Email This  |
Print  |
RSS
More Insights
Webcasts
The Experts Guide to Ransomware Response
Multi-Cloud Data Management for Modern Applications
More Webcasts
White Papers
The Path to Successful Hyperautomation Starts With the Help Desk
Managed Threat Detection and Response
More White Papers
Reports
Protection Strategies for a Cyber-Resilient Organization
The State of CCPA 2021
More Reports