SEARCH
A minimum of 3 characters are required to be typed in the search bar in order to perform a search.
Announcements
Alert
Got some free time? Grow your knowledge from the comfort of your computer for FREE!
Alert
Are you looking to stay on top of IT trends? Check out our FREE webinars and virtual events!
Alert
Planning for 2023? Be sure to check out our upcoming in-person events!
Report
How does your salary stack up? 2022 IT Salary Survey Results Revealed
PreviousNext
IT Life
2 MIN READ
Feature

Xact's WristLinx two-way wristwatch radio has a range of up to 1.5 miles and operates on 22 channels; the Vonage V-Phone makes it easy to figure out Internet phone calls while away from home; proving that everything's better with music, the waterproof SwiMP3 music player from Finis pumps out tunes while you swim.
InformationWeek Staff
Contributor
August 11, 2006 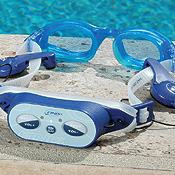 Swim To The Beat
Proving that everything's better with music, the waterproof SwiMP3 music player from Finis pumps out tunes while you swim. It works using bone conduction, the direct transfer of sound vibrations from the cheekbone to the inner ear. The $166 player, with 128 Mbytes of storage, holds about 30 songs and lasts four hours on a charge. Goggles, earplugs, and USB cable included.

News On The Run
Motorola Q and Treo 700w users who wish they could watch TV on their way to work have a new option: The MobiTV service now works with Windows Mobile phones. The $10 monthly service, which also works on Sprint 6700 and Cingular 2125 devices, shows programs from ABC News Now, CNN, the Discovery Channel, ESPN, MSNBC, and others. 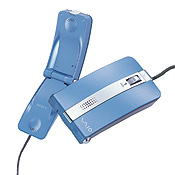 The Ears Have It
We're used to manufacturers cramming extra functions onto phones. But on a mouse? Sony's $80 Vaio Mouse Talk VN-CX1/B is an optical mouse with 800 dots-per-inch resolution that opens up, clamshell style, to reveal a VoIP phone. To announce incoming calls, a blue LED indicator light can flash or the mouse can ring. 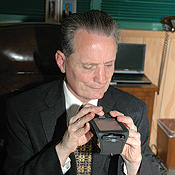 Now You Hear It
The National Federation of the Blind teamed up with renowned inventor Ray Kurzweil to develop a handheld electronic reader that acts like a talking camera. The $3,500 device takes pictures of printed materials such as a letter, restaurant menu, or business card and then reads them aloud. (A headphone jack preserves the peace in a library.) The reader also stores thousands of printed pages and transfers files to computers or Braille note-takers. 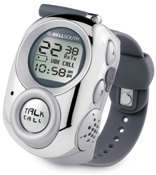 Can You Read Me?
A talking watch may be the stuff of comic books, best suited for kids, but now adults can join the fun with Xact's X33XIF WristLinx two-way wristwatch radio. The $45 digital watch and voice-activated walkie-talkie has a range of up to 1.5 miles and operates on 22 channels. It runs on a rechargeable battery, with a charger included. The design is simple, not too clunky, and Xact throws in two colorful faceplates.

Net Calls Made Easy
Figuring out Internet phone calls while away from home can be daunting, but Vonage has come up with an easy way to skip the setup. Just plug the Vonage V-Phone ($40 plus cost of service for calls) into a USB port, and plug in the earpiece microphone. Software preloaded on the 250-Mbyte USB drive takes care of the rest. All you need is a high-speed Internet connection and a PC. Mac users are out of luck.

Pandora's Site
A pop song has 200 distinct attributes, and scientists at the Music Genome Project are busy analyzing them. (The figure for jazz, hip hop, Latin, and electronica is nearly twice as much.) The result is a free streaming music site tailored to your tastes. Enter a favorite song or artist at www.pandora.com, and the site will play songs with musical similarities. If a selection doesn't strike your fancy, it won't be played again. One catch: no classical.