Our hands-on demo of the iRig Mic Studio shows a tool that can help your users make better podcasts and video presentations. It's a toolset that will allow trainers, executives, sales, and marketing professionals to put a studio in their backpacks and create good recordings from almost anywhere they happen to be.

How To Refresh A Stale IT Career
(Click image for larger view and slideshow.)

Podcasts are enjoying a moment in popular culture and business. Smartphones, listening habits, and content have intersected at a point that makes podcasts a viable option for conveying information to employees, partners, and customers. Meanwhile, slideshows and video presentations are the de facto ways of communicating with customers, especially for folks in your marketing and sales departments. The quality of the audio in all these formats is often overlooked, but it can mean the difference between success and failure for your users on the front lines.

The question for most IT pros is which tools to recommend for making these audio recordings. For those who don't live their lives in the studio, it can be a tough question. I've had a chance to spend some time with a tool that could make a huge difference for your company's podcast quality. The iRig Mic Studio can be the foundation for high-quality sound in a very portable package.

When I started doing audio work back in the Mesozoic Age, good quality meant recorders the size of a suitcase and a mic closet filled with delicate and expensive microphones. With the iRig Mic Studio, some inexpensive software, and a smartphone, you can duplicate most of performance available from that fossilized gear for the cost of a nice night out. The result is a toolset that will allow trainers, executives, and marketing professionals to put a studio in their backpacks and create good recordings from almost anywhere they happen to be. 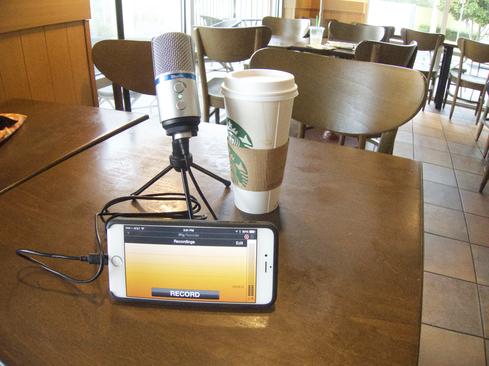 The iRig Mic Studio on a table next to an iPhone 6+. The coffee cup, for relative size, is a "venti."

I took the iRig Mic Studio out of its box and found myself holding a large-diaphragm condenser microphone considerably smaller than a can of Red Bull. There were cables with connectors for the microphone to USB, micro-USB, and Lightning ports, a mic clamp, and a very small tripod. Using the iRig Mic Studio with my iPhone 6+ was a breeze. I had previously downloaded GarageBand, so I plugged the mic in and was ready to go.

If you've never used a high-quality microphone before, the hardest part is figuring out which side should face your mouth. Hint: The side with the label and headphone port faces away from you, while the volume controls for the mic itself and a small multi-colored LED face you during use. The LED is important because it shows you when the input volume is too low (blue), just right (green), or too high (yellow and red).

Because of that large diaphragm I mentioned earlier, the sound quality the iRig Mic Studio can produce is very close to that available from some very expensive microphones you might find in recording studios. Another characteristic of the mic, its cardioid sensitivity pattern, means that it's quite good at focusing its attention on you while it does a pretty good job of ignoring the sounds in the rest of the room. Those two qualities put together mean that this is a great microphone for using in offices, hotel rooms, and other spaces where executives and professionals are likely to find themselves.

I wanted to give you an idea of the quality of the iRig Mic Studio, so I recorded three very short tests. The first is a recording that I made with the microphone that's built into the iPhone 6+. It's a perfectly fine recording, but it sounds "thin" to me -- it's not hard to believe that it came from a phone.

Next, I made a recording using the Heil PR 40, which I use for most of the InformationWeek Radio shows and podcasts I do here. This is a commercial microphone that's used in a lot of radio broadcast studios. The sound is great and the price of the mic -- about $330 from most sources -- reflects that. If you've heard one of our InformationWeek Radio shows, you'll be familiar with the sound.

Finally, there's the recording made with the iRig Mic Studio. To my ear, it sounds much more like the Heil than the iPhone 6+. While there are differences between the mics, the iRig Mic Studio is one that I wouldn't be afraid to use on one of our radio shows.

You don't have to use the iRig Mic Studio with a smartphone. With the USB cable it will work beautifully with a laptop computer. If you do choose to use it with a smartphone, you have the option of using one of IK Multimedia's recording apps, such as iRig Recorder. I've found that I tend to turn to iRig Recorder rather than GarageBand on my phone. While there are differences in the way that the two move files between the phone and my computer, iRig recorder has enough options to make it easy for me to make recordings on the phone and do more serious editing on my laptop. 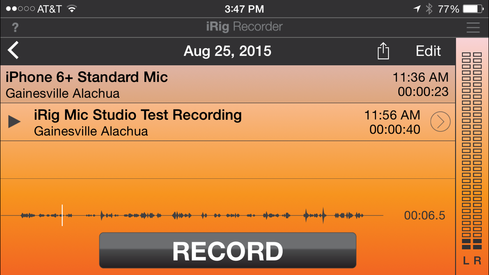 iRig Recorder is an easy to use app that works with both the iRig Mic series and the iPhone's built-in mic.

While I've focused on purposes like podcasting, you might find that your users are much more interested in another use for the iRig Mic Studio: Presentation voice-overs. One thing that really differentiates amateur and professional video and slide presentation packages is the quality of the sound. If the sales and marketing teams can build videos with superb sound, it's amazing how many visual quality compromises they can get away with.

So what does all this quality cost you? The suggested retail price for the iRig Mic Studio is $179.99, and most of the retail outlets I've found hew pretty closely to that price. In my photos you'll notice the phone standing up so it's easy to see. That's courtesy of the iKlip Case, which has a suggested retail price of $39.99. I've found it to be a very serviceable case, though no one will mistake it for something like an Otter Box case when it comes to bullet-proof protection.

Is the iRig Mic Studio perfect? Not really. The gaps between where it is and perfection are small, though. I am, for example, going to have to make a "pop filter" for the mic out of a small embroidery hoop and some panty hose material. Given the unit's size, it would be nice if they had been able to include one. If you're looking for great quality sound in a small, easy to use package, though, the iRig Mic Studio should be high on your list of mics to consider. I'm looking forward to continuing to use it to make quality podcasts on the go.

Curtis Franklin Jr. is Senior Editor at Dark Reading. In this role he focuses on product and technology coverage for the publication. In addition he works on audio and video programming for Dark Reading and contributes to activities at Interop ITX, Black Hat, INsecurity, and ... View Full Bio
We welcome your comments on this topic on our social media channels, or [contact us directly] with questions about the site.
Comment  |
Email This  |
Print  |
RSS
More Insights
Webcasts
What We Can Learn from Sports Analytics
Strategies for Success with Digital Transformation
More Webcasts
White Papers
Two-Factor Evaluation Guide
Ahead of the Curve: Accelerate Cyber Response with DNS Insights
More White Papers
Reports
Are Unprotected Cloud Databases Leaking Your Data?
Evolution of Ransomware Gangs
More Reports