50%
Tweet
Porsche, the iconic sports car manufacturer, is going electric with Mission E, which will put the first all electric Porsche on the road by the end of the decade.

The car company behind one of the most iconic automobile designs of all time is taking a big step forward into the future. Porsche announced this week that the company's first 100% electrically-powered vehicle is on its way, with a launch scheduled for the end of the decade.

Porsche's supervisory board gave the green light for the Mission E project, with the words of Dr. Oliver Blume, its chairman, explaining that the company is "beginning a new chapter in the history of the sports car."

The company will be investing around 700 million euros ($762 million) in its main manufacturing site. Over the next few years, a new paint shop and a new assembly plant will be built.

The existing engine factory is also being expanded for the production of electric motors, and the existing body shop is also being enlarged. On top of those improvements, Porsche will be investing in the Weissach development center. 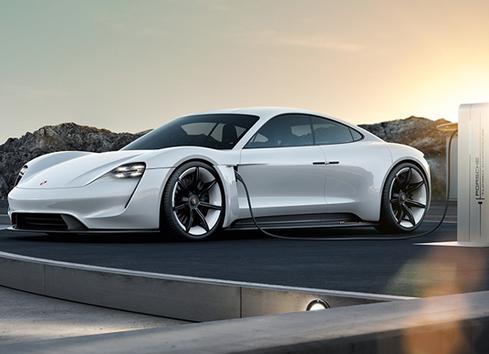 In concept form, the four-door car with four individual seats has a system power output of over 600 horsepower, or 440 kW, which means the vehicle is expected to achieve both acceleration of 0 to 100 km/h in under 3.5 seconds with a planned maximum range of more than 310 miles.

When charged using an 800-volt charger unit, which is planned to be specially developed for the car, the lithium-ion batteries integrated within the vehicle floor could be recharged to the 80% level after just 15 minutes.

[Read why Porsche is picking Apple's CarPlay for its vehicles.]

Plans are under way for optional equipment that would allow the vehicle to be "refueled" wirelessly by induction through a coil, which the owner could have installed beneath the garage floor.

"We brought Mission E to Zuffenhausen and Weissach where the future has tradition. The workers' side made the employer's side an offer that they couldn't refuse. This heralds the dawn of a new age in Zuffenhausen and Weissach," Uwe Hück, chairman of the central works council and deputy chairman of the Porsche AG supervisory board, said in a Dec. 4 statement. "Digitalization will be growing up with us. And Factory 4.0 will be a major challenge for the workforce, trade union and employer. We will be taking new approaches but not giving up on the social aspects. With today's decision, Porsche is driving flat out with no speed restrictions into the automotive and industrial future."

Porsche joins a growing list of automakers developing all electric vehicles, including other luxury brands such as BMW, and Tesla, which just took the wraps off its Model X SUV, which offers advanced safety features, Falcon Wing doors, and boasts seating for up to seven passengers.

After making it electric and enlarging the body, my first thought is, will it still look and drive like a Porsche?

As to the recharging question, since it needs electricity, could people engineer something as simple as plugging your car into an outdoor outlet or modifying parking spots with chargers so you recharge while you work or shop? something like free charging with purchase? It wouldn't need to be near gas stations. It could be anywhere.

I think you're right. One big question is who would build the chargers and who would maintain them? And can all electric cars use the same one? Hopefully there would be some kind of industry regulation. Hopefully.
Reply  |  Post Message  |  Messages List  |  Start a Board

@soozyg I don't think electric cars will truly be mainstream until all gas stations also offer recharging stations, but we're a very long way away from that point still.
Reply  |  Post Message  |  Messages List  |  Start a Board

So, I guess, one question would be are chargers going to be automatically associated with gas stations or will they be a totally different entity and stand alone in their own spots? That would be annoying.
Reply  |  Post Message  |  Messages List  |  Start a Board

I agree it's a wait and see kind of situation, but that also makes it a Catch 22. If everyone waits to see the prices come down, the technology improve and mass production, then mass integration never happens. Or not for a long time. The tipping point for this car is far into the future.
Reply  |  Post Message  |  Messages List  |  Start a Board

@SoozyG I see car chargers in very few places, certainly not at the gas stations near me.  I did notice them in Central Park, as the cars used by the park staff would be electric. I also have noticed some in NJ, though they are not nearly as ubiquitous there as gas stations are.
Reply  |  Post Message  |  Messages List  |  Start a Board

@SoozyG I see car chargers in very few places, certainly not at the gas stations near me.  I did notice them in Central Park, as the cars used by the park staff would be electric. I also have noticed some in NJ, though they are not nearly as ubiquitous there as gas stations are.
Reply  |  Post Message  |  Messages List  |  Start a Board


@ I am confused as to know whether the charging of all vehicles will be using the same charging facility or every brand of car will be having separate charging facility. If later is true then we are having a problem at our hand. Any body with better knowledge? Thanks


@Soozyg the problem for charger at gas station will be like this for some time to come as the production is not going to effect till a decade from now. May be if more companys start venturing into the technology on then we can find out the real benifit of theswe cars with the spare issue as well as the charging problems will get resolved. Till that time I think we need to only wait and see. What is your opinion?

I agree with this and I would add one more issue, which is, one Tesla promoter said the big issue is actually charging. There aren't a lot of chargers around at gas stations--and until the buyer market hits a tipping point, there won't be. I have never paid attention to whether or not gas stations have car chargers there. Has anyone else?
Reply  |  Post Message  |  Messages List  |  Start a Board
Page 1 / 2   >   >>
Editors' Choice
Hot Topics