Hector Ruiz, AMD's chairman, chief executive, and president, talks to InformationWeek about the company's future, its lawsuit against Intel, and a new wafer plant in Germany.
Darrell Dunn
Contributor
October 10, 2005
In the past year, Advanced Micro Devices has produced a whirlwind of innovation and enjoyed unprecedented acceptance in the microprocessor market. AMD has transformed itself from a perennial also-ran into a true threat to the dominance of industry giant Intel. AMD recently stepped up its antitrust legal action against Intel by serving 15 leading PC manufactures and retailers with subpoenas. On Tuesday, the company, which has seen its microprocessor revenues grow by about 40% sequentially the past two quarters, will announce its third-quarter results. And on Friday, the company will flex its manufacturing muscle with the opening of a new 300-mm-wafer plant in Dresden, Germany. Hector Ruiz, AMD's chairman, chief executive, and president, recently spoke with InformationWeek about how it plans to keep its momentum rolling. 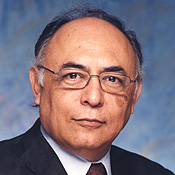 InformationWeek: How much progress has AMD been able to make in 2005?

Ruiz: We are making progress at leaps and bounds every quarter and we've made huge progress in 2005. We are penetrating the commercial space, and continue to get strong people to join the company. In my view, the perception of the company in the world has been elevated, so I believe these are great times and a phenomenal rate of change for the company.

InformationWeek: Intel's only reaction to date to your dual-core duel challenge has been derisive, calling it a fight in the schoolyard. Did you believe that Intel would agree at any point to an independent face-off?

Ruiz: We wanted to have some fun. It was more of a statement of our confidence. I didn't actually think they would take us up on it, but it was a statement that if they do, we're confident we have a better product.

InformationWeek: You are going to formally open Fab 36 on Friday. How significant is that event to the future of AMD?

Ruiz: It's huge. This is the first major facility expansion we've done in quite some time. It's our first 300 mm [wafer] factory, and we believe it will be capable of handling at least three manufacturing nodes. It's got a good ten-year lifecycle ahead of it. It's been a gargantuan task that is on schedule and on budget, and was well executed by our German team.

InformationWeek: Even with Fab 36, AMD will still have significantly less manufacturing capacity than Intel. Are there any concerns from customers over this capacity gap between AMD and Intel?

Ruiz: I don't think so. The manufacturing capacity that we'll have in place with this expansion gives us a lot of head room and our customers have not expressed any concern.

InformationWeek: Obviously you'd love to have the concern of fulfilling 60% to 70% of the overall market demand, but that is not going to happen anytime soon. How large a percentage of the market will the capacity of Fab 36 enable AMD to fulfill?

Ruiz: It's a question of how far you take it how fast. But we will have in Germany, in that one site alone, the capability in the 2008 or 2009 timeframe of building 100 million processors [a year]. That puts you in a 25% to 30% kind of market potential. We plan to do everything we can to fill it up.

InformationWeek: What does Fab 36 allow AMD to do that it couldn't do previously? Does it change AMD's competitive position?

InformationWeek: With AMD's existing fabs, you could have only gone to 65 nanometers? [AMD is currently manufacturing at 90 nanometers.]

Ruiz: It is up in the air [what we could have done with existing fabs], and just how far we could have gone. You can always push things faster and farther than you think. If we try pushing [the existing] Fab 30 to 65 nanometers and it proves more difficult than we thought, we'll now have the ability to manufacture at 65 nanometers already in place.

InformationWeek: Now that a little time has passed, do you still believe that filing antitrust lawsuits against Intel was the best of course of action? Some will always view that kind of move as an act of desperation and an admission of weakness.

Ruiz: I can understand how they might say that, but it is totally contrary to the position we have. We have a strong product position, and a leadership position on technology. We are doing better than we ever have in the history of the company. We felt this was an appropriate time to highlight to the world that Intel's practices are illegal and they need to stop. It is important for customers and consumers to have access to all the technology plans that we have for the future. Now is the time to make sure that those impediments are removed so that we won't be unnecessarily be impeded from serving the market.

InformationWeek: Have the lawsuit changed any opinions or buying patters of customers as yet?

Ruiz: We think it's too early to see what impact it has had. I think customers will feel able to break free from this chokehold that Intel has had on them, and I believe it will be positive for them and positive for us.

InformationWeek: Given the relative success that AMD has enjoyed the last couple of years with its server chip, the Opteron, is it possible for the company to build a successful enterprise business without really creating a strong PC or client presence?

Ruiz: It is our plan to build a strong client position. We made the decision three years ago to start with the server in the enterprise. We purposely decided to go after the belly of the beast. We had to break into that part of the enterprise market to get to where we wanted to go. But our intention from day one was to continue working to evolve into being a complete provider to the enterprise, including client, desktop and mobile.

InformationWeek: That seems to be where the core of the lawsuit goes back to, the client side, and your complaint that that is where you haven't been able to make the progress you should have. So if you can't really establish that part of the enterprise strategy, can you be a true enterprise provider?

Ruiz: We are going to establish that part of the enterprise and that is part of our strategy. We believe we are going to execute on that. We think we will achieve a significant share of that piece of the market [with Athlon], which up to now, frankly, has not been that successful for us. We're going to do it with great products, great technology. I believe that like with Opteron, the market will reward a good product.

InformationWeek: AMD has enjoyed an unprecedented level of success and visibility with the two-pronged innovative coupes it pulled off with 64-bit computing first, and then getting out front on dual-core processing. How is possible to keep that level of momentum in place, and that kind of visibility in the mindset of the enterprise customers as well as the institutional investor?

Ruiz: With a competitor of the size and strength of Intel, it obviously will not be easy. It is a big challenge and a big task. But we have confidence in our model, which is to stay focused on what we perceive to be customer needs and the path they want us to be on. That is one of the reasons we have deep partnerships with companies like Sun [Microsystems], where we are intimately discussing details of their computing needs well into the future so that we can incorporate as many customer inputs as we can in our roadmaps. We are doing the same thing on the client, and we will continue to do that in everything we do.

That focus to me on only a single product line -– the x86 product line -– gives us the confidence we can do that. Our competition, even though they are large and strong, they have many different product lines they are focused on from Itanium to Xeon to Pentium4 to StrongARM, etc. Everything we do stays on the x86 bandwagon.

InformationWeek: You brought up Sun as a very close customer, and it seems that relationship continues to become stronger. Is that necessarily a good strategy for AMD to become so tightly coupled with single equipment manufacturing, which is also arguably the weakest of the big four at this time?

Ruiz: This is all about commitments and shared resources, and Sun has been a great partner in embracing the AMD64 technology. We tend to be too quick to write off great companies, and I believe they are doing all the right things to gain strength. We are delighted to be in a very strong alliance with them, and they are very committed and happy with our partnership.

InformationWeek: The flash memory business remains kind of a question mark. Does AMD need to make some kind of definitive decision soon to clear the decks and move forward without any potential distractions from that business?

Ruiz: We made a very determinant decision two years and we are getting to the end of that. We decided to separate that business totally from the company [and] have two business running totally independently. The anticipation is that at some point in time we would divest ourselves of the flash business and the opportunity has come now [to complete] an IPO. I believe we are on target to execute [the IPO] shortly. The only thing gating us is finishing all the work that has to be done. It is a fairly major effort when you are talking about a $2 billion plus flash memory business.