SEARCH
A minimum of 3 characters are required to be typed in the search bar in order to perform a search.
Announcements
Event
Discover the latest in hybrid work trends, including new technologies - Learn more at Interop.com!
Event
SupportWorld Live: May 15-20, 2022 | MGM Grand, Las Vegas, NV
PreviousNext
IT Life
4 min read
article

Here's a look at 802.11n routers from Apple, Belkin, Buffalo, D-Link, Linksys, and Netgear. Read on to find out which device is your best choice.
InformationWeek Staff
Contributor
September 29, 2007
Netgear RangeMax Next Wireless-N Router 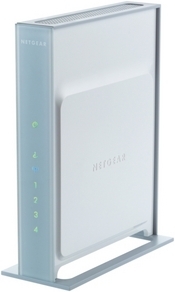 The RangeMax is simple in design and, like the Airport Extreme, doesn't have any external wireless antennas. While this contributes to its clean look, it would have been nice to be able to position the antennas to maximize signal strength.

Installation was a breeze. Like its competitors, the RangeMax can be installed with the help of the included CD entitled, "Start Here." Once loaded, the CD gives you the option of walking you through the installation process (designed for novices) or a manual installation, which lets you surf over to the router's IP address and customize it as you wish.

Performance wasn't the strongest aspect of the RangeMax; in fact, I found it to be quite sluggish when compared to the Buffalo and D-Link routers. At a range of ten feet, the router was only able to muster speeds of 66 Mbps in a dedicated N-network and 55 Mbps and 26 Mbps at distances of 50 feet and 200 feet, respectively.

In a mixed environment, the RangeMax performed well below expectations. At a range of just ten feet, I was only able to get 37 Mbps out of the router.

Measured range was fairly standard; the router was able to hold its signal at a distance of roughly 100 feet past the back corner of my house.

The Netgear RangeMax Next router is a fine device that performs well, although it's not up to high bar set by the Buffalo Nfiniti or the D-Link Dir-655. But with a nice customization menu and a relatively stylish design, maybe the next iteration can add to those benefits.

Overall Buying Advice
As I mentioned earlier, the testing performed on these routers was intended to answer two important questions: Are they worth buying? And should I replace my G-router with one of them? Unfortunately, the answer isn't cut and dried.


If you currently don't have a wireless network in your home, then by all means, pick one of these N routers and establish a home network. If you do have a G-router, it's best to stick with it.

Sadly, the average home will not realize any significant benefits of using an N-router because its speeds, while faster than a legacy device, do not translate well until you're far enough away. In other words, the speed increases will not be significant enough to justify spending over $100 for a new device. To make matters worse, the IEEE has yet to solidify one spec as the de facto N-router, which means these routers could become obsolete before you get a return on your investment.

N routers are more capable than the G routers that came before them. But with an unknown future and devices that offer nominally better performance, you may be wise to wait before you invest.