SEARCH
A minimum of 3 characters are required to be typed in the search bar in order to perform a search.
Announcements
Report
How does your salary stack up? 2022 IT Salary Survey Results Revealed
Event
Learn about the latest technologies that are revolutionizing identity governance and access management
PreviousNext
IT Life
3 min read
article

Review: Media Player Puts A Lot In A Little Package

Kingston's K-PEX 100 all-in-one media player is small, light, and loaded with interesting features, although it has some limitations and its interface could be better.
InformationWeek Staff
Contributor
October 27, 2006 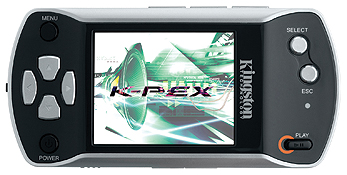 I'm a proponent of the Swiss Army knife philosophy of electronic devices. My ideal carry-along is a small, lightweight digital device that plays my music, shows my latest photos, offers a quick video, lets me read the latest novel, and makes me a cup of coffee. The Kingston K-PEX 100 portable media player isn't quite there, but it comes close enough.

The K-PEX is an impressively small and lightweight media player that plays MP3 and video files. It acts as a voice recorder, includes an FM radio, exhibits photos, and can accept files from USB flash drives. The device comes in 1-Gbyte ($130) and 2-Gbyte ($180) models and has a miniSD expansion slot for additional storage.

The design of the K-PEX is interesting, but it takes awhile to get used to. On the left side of the 2-inch color LCD is a button that serves for both Menu and Game Exit, four cursor keys, and the Power button. On the right side of the display is a Select button, a Power button, a power light, and a Play button. There are other buttons on the top edge of the device--Mode, Repeat, and Record; Lock (to keep it from accidentally going on when it's bouncing around in your backpack) and Volume are on the bottom.

Despite their labels, some of the buttons offer a variety of functions. The Play button also operates Pause, and when you're in, say, the Music mode, you can access your file menu by hitting Escape. In fact, I often found myself pressing several buttons in search of the right one to use.

Once you have the system down, the K-PEX isn't difficult to use. Files are copied to and from the device manually using the unit's File Manager; you drag and drop the files from your computer to the appropriate files in the player. When the unit powers up, you scroll through the various features by pressing the left and right cursor keys. These features include:

>> Music: Most MP3 players sound basically the same, and the K-PEX works as well as the others I've tried. A nice addition is the ability to switch the equalizer to settings such as pop, jazz, classical, or rock.

>> Game: The K-PEX comes with two games, which could come in useful when things get particularly boring.

>> FM radio: I was impressed by the FM radio, which comes through with less interference than with other portable players, but setting up the presets is a bit daunting.

>> Record: A nice, simple addition. If you want to record your voice, just hit the Record button. You can also record from an external source using the included line-in cable.

>> Video: The K-PEX runs videos, but only in the MPX format, so you have to convert any videos to that format using the Transcoder software that ships with it.

>> Text: Because I'm an enthusiastic reader, I was heartened to see that the K-PEX offers a text reader. Unfortunately, the text file I loaded was barely readable.

>> Photo: When you select the photo viewer, you get a list of your photos; select one for viewing. From there, you can use the cursors to go through your collection.

>> Host: This feature allows you to transfer files from a USB flash drive to the K-PEX, using the included cable.

K-PEX also comes with a rubber case, a set of reasonably good earbuds, and a USB cord for both transferring data and powering the unit. On the whole, this is a very neat little gadget.