A robot run by a brain made up of bacteria sounds like a science fiction plot, but it is actually good science.

Basically, unless you have a degree in biochemistry, what you are about to read will freak you out.

Two Virginia Tech scientists have created a mathematical formula for running a robot brain with bacteria. Soon they are going to build a real robot that runs on a hive mind of bacteria just like a brain. They are doing it because they want to learn more about how our own brains are basically controlled by the bacteria in our bodies. That, or because the bacteria told them to do it.

It is enough to make Elon Musk curl up in a little hole and cry. Not only are we talking about AI, which he fears, but we're talking now about robots controlled by AIs that are controlled by species other than ourselves. Not to mention, we're unleashing potential bacterial nightmares on a population already worried about a pandemic. It is the stuff of science fiction. Very dark science fiction.

Before we get too invested in the nightmare, why are we doing this? Because it is actually good science.

Here's what you have to know: 90% of you, isn't you. You're only 10% human cells. The rest of you is made up of microbes that aren't you, but they are a part of your normal physiology. For instance, you have trillions of microbes in your digestive system that break down your food. While that sounds gross, it is a good relationship. They break down the food and we ingest most of it in the form of nutrients. They take a handling fee in the form of some of the food and live on.

Here's the thing: We're starting to realize that not all of those microbes mind their own business. Some of them actually change our personality, control our actions, and might even be the cause of mental disorders.

One of the most famous is probably toxoplasma gondii. It is a microbe found in cat poop that makes you like cats. What? You thought you like cats because they were cute and fuzzy? Nope. They are evil disinterested things that manipulate you into feeding them and caring for them every time you handle their feces. T gondii has actually been known to make infected rats lay down and be eaten on purpose by cats.

Even that bacteria in your gut that digests your food is controlling you. The bacteria can interact with your brain through a neuron called the vagus nerve. Your late-night craving for fried peanut butter and banana sandwiches might come from your gut bacteria demanding certain nutrients. Your brain gets this signal and can be altered over time by it. The bacteria can make you do things to suit their needs.

We're only beginning to figure out how much these microbes can affect our brains. Some researchers are theorizing they can cause autism, schizophrenia, and all sorts of terrible diseases. 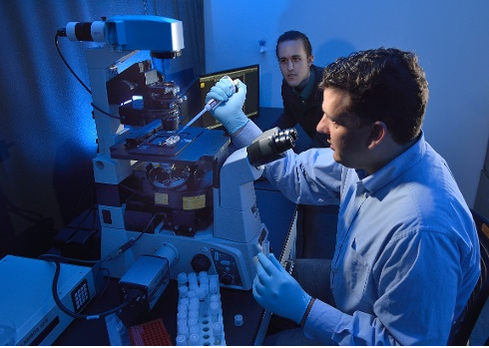 Which gets us back to the robot run by bacteria. What better way to study the effect of bacteria on the behavior of an organism than to create an artificial organism that can be placed in a controlled environment? So far, the researchers have only done this in a computer simulation, but they're going to build a real robot to do this.

In the simulations they did things such as creating a robot that sought out lactose and other nutrients when placed in a virtual environment. The robots in the simulation did some frightening things. One of the most interesting was that, when the robots would approach a food source, they would often pause and then "pounce" like a predator does in nature. In other words, the robot started behaving like an animal, not a robot. And not just any animal, a predator.

Here is a video explaining it:

The whole point of all of this is to better understand the mechanisms that bacteria use to manipulate us in order to stop an action when it has negative consequences, or when it improves the positive consequences. For instance, if we understand how certain mental illness might be caused by bacteria, we could create bacterial medicines that prevent these disorders by either killing the offending bacteria, or replacing the missing bacteria that were helping us stay healthy.

Real-world experiments have been done that have used bacteria to alter the mating habits of fruit flies, or make mice less stressed. Problem with these experiments include the cost and the controlling of variables. A bacteria-brain robot would reduce costs and "democratize the field of synthetic biology" according to the press release from the researchers.

Honestly, that's all well and good, but we're still talking about researchers using bacteria to do experiments with mind control and artificial intelligence. They've already basically created a robot that attacks its food like a predator. Oh, and it is sponsored by the Air Force. The Air Force is experimenting with how to use bacteria to control minds and create robots that attack their food like predators. How's that for unsettling? Planning on joining Mr. Musk in his hole?

No, seriously, it is creepy, but which is creepier -- having 90% of your body run by microbes you don't understand, or having 90% of your body controlled by microbes and learning how they work? Even if the bacterial robot sounds a little scary, there's nothing in it that isn't in you. So far, while the microbes might be telling you what to eat and how to act, they mostly haven't killed you … yet.

While it is fun to think of a giant robot wiping out all humans in the name of bacteria, these microbes don't want to do that. For the most part, they need to keep you alive to keep feeding off you. The ones that kill us need a mechanism for going to the next host. If we're all gone, they don't last. Kill your host too fast and you can't spread.

So the freaky part isn't the experiment, or the robot. The creepy part is that you aren't all you. I don't know about you, but I'd rather learn as much about that part of me as possible.

David has been writing on business and technology for over 10 years and was most recently Managing Editor at Enterpriseefficiency.com. Before that he was an Assistant Editor at MIT Sloan Management Review, where he covered a wide range of business topics including IT, ... View Full Bio
We welcome your comments on this topic on our social media channels, or [contact us directly] with questions about the site.
Comment  |
Email This  |
Print  |
RSS
More Insights
Webcasts
Bolstering Your Enterprise Cyber Risk Assessment
Monitoring Critical Cloud Workloads
More Webcasts
White Papers
The State of Zero Trust Security Strategies
Guide to Enabling 5G Deployments
More White Papers
Reports
2021 Application Security Statistics Report Vol.2
Gartner Market Guide for Insider Risk Management Solutions
More Reports

@Broadway0474- You should write screenplays. that's a good line. :)

Personally, i agree with you that man is more likely to wipe himself out than anything. But given that we seem to be virtually ignoring climate change, i just can't get all that excited about the remote threat of AI when there is a real threat staring us in the face.

But more importantly, we've been guessing science was going to ruin us forever. Scientists are more careful about this than regular folks. i always feel like science is feared because we don't understand it at the level scientists do. It seems unfair to think they are more likely to make a mistake than industrialists, politicians, etc.
Reply  |  Post Message  |  Messages List  |  Start a Board
InformationWeek Is Getting an Upgrade!