50%
Tweet
A simple computer game aims to build trust in self-driving cars by showing people how badly they drive themselves.

Made With Monster Love developers have created a Web-based game called Error-Prone to show you that self-driving cars are superior to those driven by humans. The game basically mocks you and points out what a lousy driver you are, no matter how Top Gun you think you are for being able to parallel park.

The game is rather simple. Twenty-six cars drive in a circle. You control one by simply pushing a key on your keyboard. Each car can be controlled by a different letter on the keyboard, so if you have enough friends with long arms, 26 of you can play. The longer you press the key, the faster you go. Taking your finger off slows the car down.

The first couple minutes of this video will show you how it works:

Basically, the first thing you'll discover is that it takes about five seconds for you to crash your first car. Then you will repeatedly crash cars. Eventually, you'll learn to not crash, but every time you slow down, all the cars behind you do too.

If you practice long enough, you'll eventually get to a full minute of driving without a crash. You'll feel proud of yourself -- until the computer tells you that because of all the times you slowed down, the traffic behind you did too. You basically held up traffic for miles.

The point is driven home pretty clearly. Self-driving cars talk to each other. They can drive when very close together at little risk. When one slows, the others can respond accordingly.

In the human-driven world, one person braking for a second can cause a chain reaction for miles as people see the brake lights ahead and respond in kind. They don't even need to see the original braking point. They just see lights somewhere along the chain. That's why sometimes traffic creeps for several minutes and then speeds up, with few people noticing the original cause.

In the game, there are no humans to crash cars, no humans to slow other cars, no distracted drivers. The game makes it seem like autonomous vehicles are an obvious win for safety and for the environment. (Tighter driving means fewer roads. Fewer traffic jams mean better fuel efficiency.) We need that argument since many people don't trust self-driving cars.

There are a few problems with the game. For one, driving a real car is easier than driving a car with a single button. The button is essentially on or off. An accelerator in your car has lots of middle ground between on and off. The hardest part of the game is regulating your car's speed in traffic. You have to hold the key down sometimes and repeatedly tap it at other times.

Another problem is that it didn't take me long to nearly perfect it. The first time I played, I got the message, "You damaged 5 cars and your cars drove 28.5 km. An automated car would drive 40 km." By the fifth time I played it, I didn't damage a car and drove 39 km. Granted, it was still less than a self-driving car, but I got into the ballpark in five minutes. 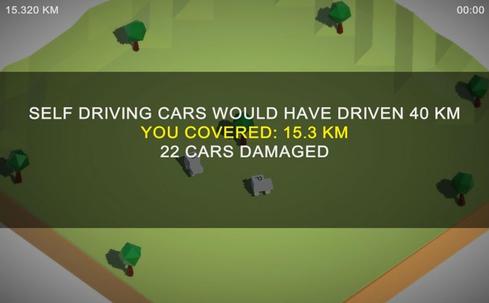 (Image: Made With Monster Love)

In other words, it is going to take a little more than this game to convince people they are worse drivers than computers are, but it's a start.

Let's face it. We're not all race car drivers who can go 200 mph while staying inches apart. This game will show you exactly how error-prone you really are. Games like this are what we need to build trust in the self-driving car market. This one is also fun to play (especially in a group) with a great lesson.

Try it and tell me how you did. Tell me if it changed your opinion of self-driving cars.

David has been writing on business and technology for over 10 years and was most recently Managing Editor at Enterpriseefficiency.com. Before that he was an Assistant Editor at MIT Sloan Management Review, where he covered a wide range of business topics including IT, ... View Full Bio
We welcome your comments on this topic on our social media channels, or [contact us directly] with questions about the site.
Comment  |
Email This  |
Print  |
RSS
More Insights
Webcasts
Building and Refining Threat Hunting Practices in Your Enterprise
Securing Active Directory the Way it Deserves
More Webcasts
White Papers
DevOps for the Database
Wired vs. Wireless LAN Solution
More White Papers
Reports
Online Threats -- and What Your Org Can Do About Them
[Special Report] Remote Network Management
More Reports

IT Career Paths You May Not Have Considered Lisa Morgan, Freelance Writer,  6/30/2020
White Papers
DevOps for the Database
Wired vs. Wireless LAN Solution
2020 State of Malware Report
How to Architect and Build Highly Observable Systems
10-step Executive Action Plan for Collective Defense