Shoot Fireballs From Your Hands - InformationWeek

0%
Tweet
The Geekend covers a device that lets us do something we've all dreamed of: Throwing fireballs.

I'll wager that nearly every regular reader of the Geekend, and almost every reader of InformationWeek (at least our IT Life section), grew up dreaming of being able to throw fireballs like a wizard or like a super hero. Whether you played Dungeons and Dragons, or watched the Human Torch on Saturday morning cartoons, it was a go-to fantasy power.

Now. You. Can. (Do you hear angels singing? Are the clouds opening up?)

A magic supply shop called Ellusionist is selling a device called Pyro that allows you to throw fireballs up to 10 feet away. It straps to your wrist so no one sees it, and it can shoot up to four fireballs without reloading. It works, too. The first round of the product sold out, and reviews are all fantastic. It uses traditional magician's flash paper and batteries to make massive fireballs shoot from your hands, without ruining your clothing. Here is the awesome video:

Because super heroes are hot right now, Ellusionist wants to compare this device to super hero powers and spy gadgets. Of course, the first fireball throwers in the sci-fi world were wizards. And that's more what this reminds me of (especially since it is a magician’s gadget). And there's your problem.

That guy looks awesome doing the tricks. He's got great lighting, a practiced look. He looks like a freakin' super hero. If you or I strapped one of those things on, if we're lucky, we'd look like this:

But we'd probably end up looking more like this:

We're never going to look like the awesome dude in the ad, no matter how many leather jackets we buy.

Also, I encourage you to buy this sooner rather than later. I suspect it won't be long until some fool pays $175 for one of these things and burns down a neighbor’s house or sets the cat on fire -- at which point every state in the union will rush to ban them. 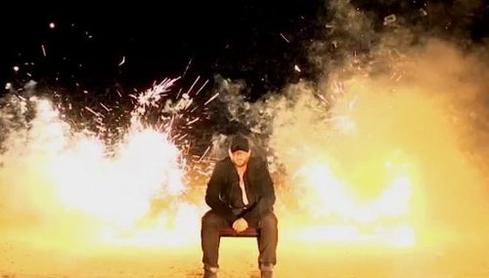 You have to love the thing. You know all your friends will want to see you use it at least once. If you avoid setting them on fire, they'll probably even want to see it again. How awesome would this be for July 4th celebrations -- or any time you have a BBQ? I have tiki torches in my backyard. I want to start lighting them with this thing. There's no end to the geekiest fun you'll ever have.

Ordinarily, when I feature a goofy gadget in the Geekend, I have some ideas about a real-world use for it, or a belief that it will benefit all mankind. I've got nothing this time. It is just awesome. Enjoy it for its awesomeness. Be a hero or a wizard. Buy one for yourself before one of your friends does and you look like a follower instead of the supreme being you truly are.

David has been writing on business and technology for over 10 years and was most recently Managing Editor at Enterpriseefficiency.com. Before that he was an Assistant Editor at MIT Sloan Management Review, where he covered a wide range of business topics including IT, ... View Full Bio
We welcome your comments on this topic on our social media channels, or [contact us directly] with questions about the site.
Comment  |
Email This  |
Print  |
RSS
More Insights
Webcasts
The ROI Story
The 6 Must-Haves for Practical Cloud Security
More Webcasts
White Papers
6 Emerging Cyber Threats That Enterprises Face in 2020
Digital Transformation Built on the Cloud
More White Papers
Reports
How Enterprises Are Developing and Maintaining Secure Applications
eSentire Annual Threat Intelligence Report: 2019 Perspectives and 2020 Predictions
More Reports

@jagibbons: Don't worry, if your wife doesn't let you get your own Pyro, I'm sure Dave will let you borrow his.
Reply  |  Post Message  |  Messages List  |  Start a Board

@mak63: you're as normal as the rest of us. This device is a dream come true. I'm trying to figure out how to incoprporate it into my next Halloween costume. And, imagine what Comic Con 2015 will be like if all the would-be superheroes catch wind of this. We'll all need pocket-sized fire-extinguishers.

@TerryB- Sure, the right lawyer will definitely win anything. But if you use fire on stage, you have to have the right contracts and pyrotechnics licenses and all that. When i lived in Boston a while back there was a tragic night club fire where a bunch of people died because the band was illegally using fire in their act and set the night club on fire. It wasn't the effect that was the problem but the fact that they didn't know how to use it.

You can get approval for a lot of crazy stuff on stage. You just need to go through the right hoops. I think the people who sell this think they are selling to an audience of professionals (they are a magic supply shop). They may or may not realize that they came up with something that will attract amateurs like you and me. :)
Reply  |  Post Message  |  Messages List  |  Start a Board

Dave, I'm not sure that will fly. Didn't they ban Ted Nugent from shooting flaming arrows in his concert act for violating fire code?  That "stage" better be in field somewhere. And I'm guessing not in California since rubbing two sticks together seems to burn 2000 acres at a time.
Reply  |  Post Message  |  Messages List  |  Start a Board

@whoopty- I tink the issue is that without all the special effects magic looks kinda dorky. It is 90% show and style and 10 percent tricks. The fireballs probably don't look that cool in your backyard. But i'm just going to roll with it and assume they are awesome.
Reply  |  Post Message  |  Messages List  |  Start a Board

@PedroGonzalez- I suspect the fireball wouldn't hurt the thief that match, but let's face it, Who wouldn't run away if their victim did that? Clearly, the thing isn't as dangerous as we think or else they'd have thought better of selling it or using it for that matter. But as they say, playing with fire...
Reply  |  Post Message  |  Messages List  |  Start a Board

@TerryB- I suspect that the "use case" here is for purposes of stage magic. Still, I don't think that flies when push comes to shove in a courtroom.
Reply  |  Post Message  |  Messages List  |  Start a Board