If you work for an IT leader who expects you to be always-on, even during your drive times, you'll want to see what researchers have discovered about how much hands-free systems diminish your attention span behind the wheel.

If you work for an IT leader who expects you to be always-on, even during your drive times, you'll want to pass along this news. Even using hands-free systems behind the wheel causes considerable distraction when driving.

In a pair of studies conducted for The AAA Foundation for Traffic Safety, University of Utah researchers found that it takes a considerable amount of time for a driver to return to full attention after using a hands-free system.

In some cases, a driver doing 25 mph could travel more than 1,000 feet before regaining full attention after using a hands-free system.

"Drivers should use caution while using voice-activated systems, even at seemingly safe moments when there is a lull in traffic or the car is stopped at an intersection," said Marshall Doney, AAA's president and CEO, in a statement. "The reality is that mental distractions persist and can affect driver attention even after the light turns green."

[ Of course, it might not matter much longer. Read Tesla Updates Autopilot Software, Moves Closer to Self-Driving Cars. ]

One of the studies showed that it is highly distracting to use hands-free voice commands to dial phone numbers, call contacts, change music, and send texts with Microsoft Cortana, Apple Siri, and Google Now smartphone personal assistants. The other study examined voice-dialing, voice-contact calling, and music selection using the in-vehicle "infotainment" systems in 10 vehicles of the 2015 model year.

The studies were conducted with participants driving the one of the ten car models at 25 mph or less around a 2.7-mile route in Salt Lake City's Avenues neighborhood as the testers used voice commands to dial numbers, call contacts, and tune the radio using in-car systems. Participants were also studied under the same conditions while using one of the three smartphone voice assistants to dial numbers, call contacts, choose music, and text. 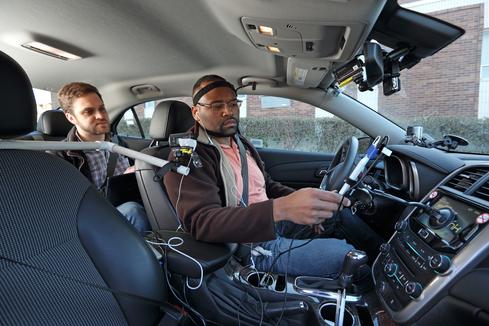 A 27-second distraction while on the road means a driver traveling 25 mph would cover the length of three football fields -- more than 1,000 feet -- before regaining full attention. Distracted-driving statistics are sobering. In 2013, 3,154 people died and 424,000 others were injured in motor vehicle crashes on US roads involving driver distraction, according to the US Department of Transportation. 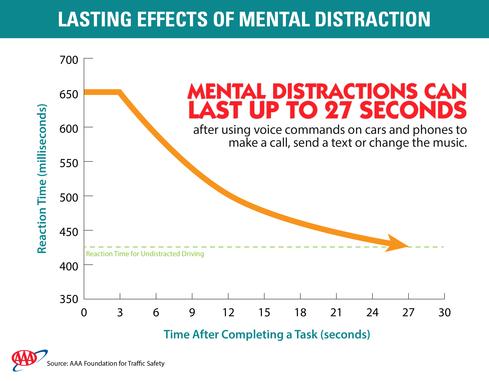 Why the long distraction time? Partially because you have to re-engage your mind to the task of driving. But also because these systems are new and have a long way to go in terms of user experience. David Strayer, one of the principal researchers, said in a prepared statement: "These systems are often very difficult to use, especially if you're just trying to entertain yourself. … The vast majority of people we tested ended up being frustrated by the complexity and error-prone nature of the systems."

The study of in-vehicle information systems included 257 participants, and the smartphone personal assistant study had 65 participants -- all with no at-fault accidents during the past five years. Participants ranged in age from 21 to 70.

Their reaction times were then compared to known distractions that are rated on a scale of 1 to 5. According to a statement about the research:

A category 1 mental distraction is about the same as listening to the radio or an audio book. A category 2 distraction is about the same as talking on the phone, while category 3 is equivalent to sending voice-activated texts on a perfect, error-free system. Category 4 is similar to updating social media while driving, while category 5 corresponds to a highly challenging, scientific test designed to overload a driver's attention.

The graphic below shows how researchers rated the various smartphone and in-car systems: 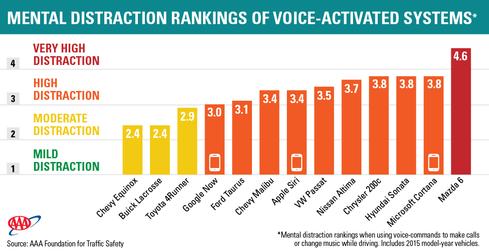 Stayer said in a statement: "If you are going to use these systems, use them to support the primary task of driving -- like for navigation or to change the radio or temperature -- and keep the interaction short."

Do you feel pressured to work even while driving? How do your experiences with hands-free systems compare with what the researchers found? Do you regularly use Siri, Cortana, or Google Now to interact with your smartphone while driving? Tell us about it in the comments section below.

David has been writing on business and technology for over 10 years and was most recently Managing Editor at Enterpriseefficiency.com. Before that he was an Assistant Editor at MIT Sloan Management Review, where he covered a wide range of business topics including IT, ... View Full Bio
We welcome your comments on this topic on our social media channels, or [contact us directly] with questions about the site.
Comment  |
Email This  |
Print  |
RSS
More Insights
Webcasts
Claim Your Free Event Pass Today - Enterprise Connect 9/27-9/29
The Death of Network Hardware Appliances and the Evolution of Cloud-Native Architectures
More Webcasts
White Papers
Understanding the Most Common Lateral Movement Attack Tactics
Adaptive Multi-Layered Defense Is the Key to Cyber-Resiliency
More White Papers
Reports
2021 Data Breach Investigations Report (DBIR)
[Report] 2021 State of IT & SecOps
More Reports
Copyright © 2021 UBM Electronics, A UBM company, All rights reserved. Privacy Policy | Terms of Service