Smartphone Personality Test: Can You Judge Me Now? - InformationWeek

Does your smartphone choice say you love sports cars, your mom's basement, or gardening? Listen up. 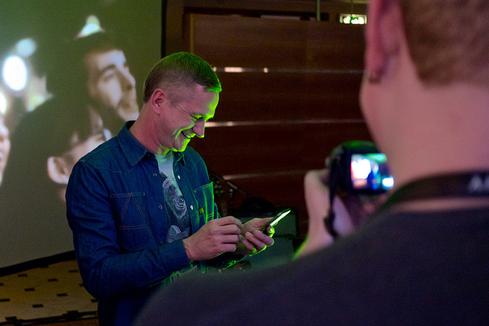 What does your smartphone say about you? Numerous studies in recent years have attempted to tackle this critical question, perhaps the most serious issue of our time after why a McDonald's hamburger doesn't spoil.

Here are some recent findings:

A 2013 study by Australian telecommunications company Telstra revealed that iPhone users are, for the most part, extroverts who enjoy traveling, playing sports, entertaining at home, and such personal luxuries as massages and facials, according to news.com.au. Samsung users are conscientious, agreeable, and enjoy exercise and video games. HTC fans are gamers as well but, sadly, are less affable than either iPhone or Samsung users.

Oh, and if you use a basic phone, maybe a clamshell or slider, you're older and into gardening. And there's nothing wrong with that.

Another 2013 study, this one from UK wireless provider TalkTalk Mobile, surveyed 2,000 customers of three major smartphone platforms -- iPhone, Android, and BlackBerry -- and uncovered an eclectic mélange of personality traits, some less than flattering, for each user group, the Daily Mail reported. The survey found that iPhone users are vain, ambitious, flirty, and enjoy spending money. The BlackBerry crowd is social, punctual, loud, and ambitious. Meanwhile, Android users are creative, polite, introverted, and tend to drink the most.

Finally, there's a 2011 report by the Idiap Research Institute of Switzerland, which studied the smartphone usage habits of 117 Nokia N95 users over a 17-month period. Though highly technical, the report does offer some easy-to-grasp conclusions concerning the link between personality, gender, and smartphone activity.

Extroverts, known for being talkative and outgoing, are more likely to receive calls and spend more time talking on their phones, the study found. No surprise there. "Conscientious" users, meaning organized and responsible folk, contact fewer people through voice calls, but use the N95's Mail app more often and the YouTube app less often than other personality types.

So what does it all mean? Probably very little, but we can make some general assumptions. It seems that people's hard-wired personality traits play a major role in how they use a smartphone, which, after all, is primarily a communication device. However, if you happen to prefer other modes of data-based communication, you're not necessarily an introvert. You might, in fact, be on the leading edge of a growing trend -- the declining popularity of the traditional phone call -- that mobile analysts began noticing a few years ago.

That's all well and good, but if you want to know what we think your smartphone of choice really says about you, click through the slideshow.


I agree I get the phone that comes free with my plan so I may skew the results of the study significantly! While the research may be true of iPhone users it doesn't mean users of other phones don't have the same attributes.

The personality traits of Android users listed here are interesting and ring true I think: conscientious, introverted, creative, and perhaps not so affable (those HTC-using grouches). Android is still seen as a bit rebellious because its users have shunned that mainstream monster, Apple. They're ok with not being in the cool crowd.

And while Android users may not care as much what people think of them, nobody cares less than flip phone users (thanks Jeff for including this proud and defiant demographic). They really really don't care what people think ... about anything. They've never been impressed with the Internet or mobile phones and are totally fine watching consumer tech innovation whiz by. Pretty sure you had to be born before 1950 to be in this group. But at least they can still hang up on someone with authority. "And stay the hell off my lawn!" Snap!

I can't convince either of my parents to carry even the cheapest iPhone. They insist on cheaper flip phones. Sadly there is no social shaming in their peer group on this matter...by the way, love the throwback phone to close this out, Jeff.
Reply  |  Post Message  |  Messages List  |  Start a Board

But then Apple changed their connector, rendering all those dock devices obsolete (no, that adapter isn't really a fix).
Reply  |  Post Message  |  Messages List  |  Start a Board

I held on to my BlackBerry long past the point where people at Interop gave me looks of pity. But at some point, it was all just too stressful.
Reply  |  Post Message  |  Messages List  |  Start a Board

Fun phone test, Jeff. I was looking to see if you listed Blackberry Z10, which does not have a physical keyboard and was their last stab at catching up with the rest of the smartphone market before they cratered and headed into their current incarnation.

I have this phone only because it was a give-away to all at the Z10 launch event in NY -- was that two years ago already? It was better than the company-issue Blackberry Torch I had at the time, so I had the company provision it BYOD style. It's still kicking, and it's more than enough phone for checking email, casual Web browsing and limited use of apps. I even love the virtual keyboard that suggests entire words as you type. I can write complete sentences with a handful of taps and swipes.

This Z10 recently passed a different kind of test when it fell out of my bag at Newark Airport on my way out to San Francisco. I made do with Skype while on that trip, and upon my return I checked at the United Airlines lost-and-found desk at Newark and, sure enough, they had my phone. What are the odds an iPhone would have shown up in the lost and found? Even a 4s would have been gone in a hearbeat. Sometimes it pays to have an offbeat, unpopular product.

What it says about you: Your retirement and your kid's college education are both well funded.
Reply  |  Post Message  |  Messages List  |  Start a Board
InformationWeek Is Getting an Upgrade!

Seeking a Competitive Edge vs. Chasing Savings in the Cloud Joao-Pierre S. Ruth, Senior Writer,  7/19/2021
White Papers
Defend Against Credential-based & Privilege Escalation Attacks
Identity Detection & Response (IDR) as a Solution for Identity-Based Attacks
Cyber-Resilience Is a Must Have in the Next Normal
Guide to Enabling a Work from Anywhere Organization
Run and Transform

More Informa Tech Live Events
Getting SASE: What Every Enterprise Should KnowEnd to End Automation: A Game Changer for Improving Workforce EfficiencyDefense Strategies to Combat Sophisticated Ransomware and Multi-Vector Attacks