The solar-powered aircraft, Solar Impulse 2, has taken off to cross the Atlantic in four days, in one of the most hazardous legs of its trip around the world.

The Solar Impulse 2 took off from JFK Airport in New York June 20 at 2:30 a.m. and set a course across the Atlantic for Seville Airport in Spain. If it completes this leg of its mission, it will have taken a giant step closer to circumnavigating the globe using only the power of the sun.

Pilot Bertrand Piccard originally wanted to target Paris as his destination, but meteorologists at the mission control center in Monaco dictated the route based on weather conditions. There are several reasons why controllers want the aircraft -- with its 17,248 solar panels and carbon-fiber skin -- to take great pains to avoid inclement weather.

Solar Impulse 2 has four electrical engines, which offer energy efficiencies for flight. For one thing, in the thin air of higher altitudes, they don't need oxygen. Electrical engines are also great at generating torque, which of course can be used to turn a propeller. But there are weaknesses related to any exposure to rain or other moisture in the air.

[Get your kids enthused about programming. Read 9 Tools for Teaching Kids to Code.]

For one, water running over the aircraft surfaces could interfere with the solar panels on the upper wing surface. These panels must generate and store power throughout the day for the Solar Impulse to make it through the night. If water gets into the circuitry between the solar panel chargers and a battery, or between the battery and the engine, it could short out an engine's operation.

That may be why the big, heavy batteries occupy a nacelle, or shared compartment. Situated directly behind the motors, it gives the engines a long and sleek look. Most of its length is occupied by the battery. The engine is a short component near the front.

Even with four engines, Solar Impulse 2 is producing only 70 horsepower, with each engine able to generate 17.4 hp. The propellers that pull it through the air are not turning as fast as those of a typical modern airplane. If anything, they seem to resemble the speed of the propellers on the early Wright Flyer as captured in early films. Solar Impulse 2's horsepower is the equivalent to what's generated by a large scooter or motorbike. It's not enough for most of us to feel confident in an attempt to cross the Atlantic.

The 70 horsepower total might also be compared to the legendary British fighter airplane, the Spitfire. Its single Merlin engine generated 1,000 horsepower. The modern 747 jetliner has an amazing 40,000-50,000 horsepower per jet engine and 160,000-200,000 total, plenty to spare with a full load of passengers and baggage. Solar Impulse struggles to lift off with one person aboard, the pilot, and must roll along the runway until it reaches 27 mph to do so.

Here's another way of thinking about it: With four engines, Solar Impulse 2 is flying at an average speed of 43 miles an hour. If it had the misfortune to fly into a steady 50-mile-per-hour headwind, it would probably be flying backwards, even though it would have plenty of lift to stay aloft.

All is well when Solar Impulse 2 is flying straight and level in still air, but, given its broad wing span, gusts of wind could cause it to tilt off a level axis. Tilting too far will cause the plane to lose lift and destabilize. Tilting past a mere five degrees is exceeding the safety zone. Somewhere around 8.5 degrees is the maximum limit that it can tolerate, Piccard explained in an interview with InformationWeek April 28. 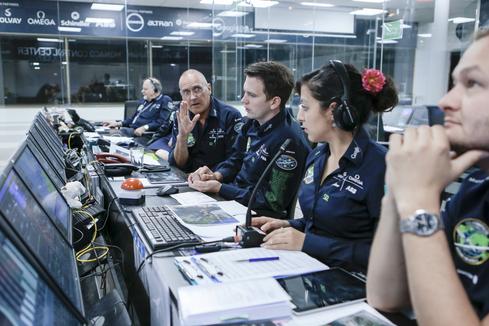 Monaco Mission Control center is guiding every move made by Solar Impulse 2 as it crosses the Atlantic.

Engineers also worry about the lightness of its construction. More than 1,400 pounds of its weight is made up of batteries, leaving a remaining 3,700 pounds for structural materials on an aircraft as large as a 747. Enormous pressures are generated on its 236-foot wingspan in crosswinds, updrafts, or down currents, and the mission's meteorologists plan carefully, seeking stable weather along the length of the route. Even so, the weather over the Atlantic is highly changeable.

Piccard, the pilot for the Atlantic crossing, will need to be in the air for 90 hours (six hours short of four full days). That would have him arriving in Seville late Thursday. He will catnap as he flies, being awakened every 20 minutes to check on the plane. He carries food, oxygen, a parachute and a life raft, but not a lot else. The plane is in constant contact with mission control in Monaco via satellite transmissions.

Piccard and fellow pilot Borschborg are from Switzerland. Piccard is a father of three, a psychiatrist by profession, and pilot by choice. He previously traveled around the world in a hot air balloon and his grandfather, Auguste Piccard, was the first to enter the stratosphere in a pressurized balloon cabin. He is also an informed spokesman for solar energy and advocate of non-carbon fuel alternatives to powering our future.

The Solar Impulse is sponsored by Schindler Elevator; ABB, a Swiss producer of electronic relays and process instrumentation; Solvay, a chemical manufacturing company; and Omega, the Swiss watch- and instrument-maker. Sponsors have financed what was originally a $120 million project to build and fly Solar Impulse 2, and added $20 million when the Solar Impulse 2 was stranded in Hawaii with batteries damaged in a cross-Pacific flight.

The aircraft arrived early, but the bigger current used to make it fly faster -- the heavier amperage -- generated too much heat in the insulated battery compartments and damaged the 350-pound lithium-polymer batteries.

The damage was the result of "a human error," said Picard at an April 28 appearance at ABB in San Jose, Calf. It's not one he'll be repeating as he crosses the Atlantic.

Charles Babcock is an editor-at-large for InformationWeek and author of Management Strategies for the Cloud Revolution, a McGraw-Hill book. He is the former editor-in-chief of Digital News, former software editor of Computerworld and former technology editor of Interactive ... View Full Bio
We welcome your comments on this topic on our social media channels, or [contact us directly] with questions about the site.
Comment  |
Email This  |
Print  |
RSS
More Insights
Webcasts
Monitoring Critical Cloud Workloads
Disaster Recovery/Business Continuity in the New Normal
More Webcasts
White Papers
Guide to Enabling 5G Deployments
Top Serverless Security Risks and How to Mitigate
More White Papers
Reports
2021 Application Security Statistics Report Vol.1
The State of CCPA 2021
More Reports

So, Solar Impulse arrives in Seville tomorrow, right in time for some late tapas. This is a great adventure for Piccard, and certainly a big step in the history of aviation.

While reading, I wondered about how he manages with sleeping. "He will catnap as he flies, being awakened every 20 minutes to check on the plane," you say. However, I still wonder how he manages with sleeping, and if the aircraft counts with auto-pilot, if there is some kind of automation in place in case he is not able to wake up due to a deep sleep segment, which is natural.

Being awaken every 20 minutes sounds like torture to me. It's neither healthy nor safe for the mission, in my opinion. Of course, most likely they have evaluated all this, and considered the risks, especially being Piccard a phychiatrist. Almost four days is quite some time to be exposed to sleep interruptions. Plenty of research has indicated that sleep interruptions lead to health risks as much as no sleep at all. Do you have some information about this?

Critics say Solar Impulse is an ungainly aircraft without much practical application. Among other things, it's illustrating that electrical engines are good for aircraft. They can fly at high altitude, where air resistance is lessened. Solar Impulse 2 rises to 28,000 feet in its journey but its designers say it can actually fly up to 39,000, feet. Oxygen is thin at that altitude but Solar Impulse would require no superchargers because an electical engine doesn't need oxygen. Siemens makes an electric aircraft engine with a high thrust to weight ratio and someone is likely to design a high flying aircraft around it.
Reply  |  Post Message  |  Messages List  |  Start a Board
InformationWeek Is Getting an Upgrade!