This week, SpaceX founder Elon Musk achieved part of his goal of bringing spaceflight a little closer to home with the successful landing of the Falcon 9 rocket. Are we nearing the dawn of a new space age?

With the celebratory exclamation "Welcome back, baby!" SpaceX founder Elon Musk took space travel one step farther into the future this week with the successful landing of its Falcon 9 rocket -- the first such feat ever achieved.

The majority of the launch cost comes from building the rocket, which flies only once. Compare that to a commercial airliner -- each new plane costs about the same as Falcon 9, but can fly multiple times per day, and conduct tens of thousands of flights over its lifetime. 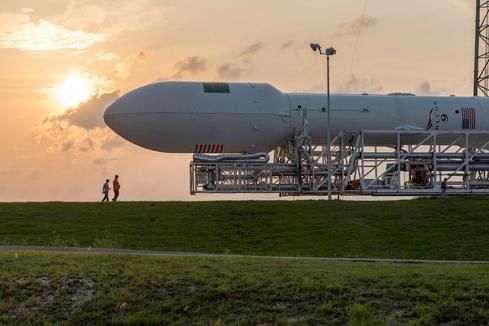 "If one can figure out how to effectively reuse rockets just like airplanes, the cost of access to space will be reduced by as much as a factor of a hundred," Musk, who is also the CEO of Tesla Motors, wrote on the SpaceX website. "A fully reusable vehicle has never been done before. That really is the fundamental breakthrough needed to revolutionize access to space."

The Dec. 21 video of the successful landing shows a raucous crowd celebrating outside the control room at Cape Canaveral Air Force Station in Florida, as the Falcon 9 rocket settles upright on the landing pad.

The ORBCOMM-2 mission delivered 11 satellites to low-Earth orbit for ORBCOMM, a global provider of machine-to-machine (M2M) communication and Internet of Things (IoT) technology.

The mission marked SpaceX's first attempt to land a first stage on land, though the landing of the first stage was considered a secondary test objective.

The objective of reusable rockets is to lower the across-the-board costs for space flight, which could result a series of developments including new types of space ventures, including commercial flights and space tourism.

"With lower costs and competition, prices could fall, stimulating demand for more access to space," Scott Pace, director of the Space Policy Institute at George Washington University, said in an interview with NBC News. "The next step is to see how much it costs and how long it takes to refurbish the recovered stage and fly it again."

Farther in the future, these types of reusable rocket technologies could help drive down costs low enough to make a mission to Mars -- something Musk has stressed the importance of -- a more financially feasible goal.

"This is a critical step along the way toward being able to establish a city on Mars," Musk told reporters following the landing. "That's what all this is about."

In an interview with Ars Technica, Eric Stallmer, president of the Commercial Spaceflight Federation, an advocate of commercial human spaceflight, said the successful landing upon reentry will have broad implications for the space flight industry.

"It makes you rethink the way we do business," Stallmer said "That's the bottom line. Is there a better way to do spaceflight? It used to be if, or when, we could reuse rockets. But now we've crossed off the 'if,' and the 'when.' It changes the way the industry is going to do business."

Musk is not the only tech mogul who is looking to harness the power of spaceflight. In September, Amazon's Jess Bezos announced Blue Origin, his plan to manufacture and launch rockets in Florida.

Nathan Eddy is a freelance writer for InformationWeek. He has written for Popular Mechanics, Sales & Marketing Management Magazine, FierceMarkets, and CRN, among others. In 2012 he made his first documentary film, The Absent Column. He currently lives in Berlin. View Full Bio
We welcome your comments on this topic on our social media channels, or [contact us directly] with questions about the site.
Comment  |
Email This  |
Print  |
RSS
More Insights
Webcasts
People Are The Most Important Part of Autonomous SOC
Nip Ransomware in the FUD: Detecting Attacks Pre-Encryption
More Webcasts
White Papers
Gartner Market Guide for Insider Risk Management Solutions
Tech Insights: Detecting and Preventing Insider Data Leaks
More White Papers
Reports
Intelligent Outcomes Are Key to Business Resilience
How IT Security Organizations are Attacking the Cybersecurity Problem
More Reports

@Gary El: Elon is one of my current favourite entrepreneurs mostly because he does what he says. SpaceX made history and the face of space exploration would change in the coming 5 years or so.
Reply  |  Post Message  |  Messages List  |  Start a Board

Doesn't Virgin airlines have a space tourism side as well? I heard they were making space crafts for the rich 10% of this world.
Reply  |  Post Message  |  Messages List  |  Start a Board

@Stratustician: I believe SpaceX would be the pioneer in space tourism because of the "don't give up" attitude and guidance of Elon Musk. The man had invested in SpaceX even before investing in Tesla. I have to say his sense of predicting the future is as sharp as other similarly successful entrepreneurs.
Reply  |  Post Message  |  Messages List  |  Start a Board

I was at the after-party in Cape Canaveral when Elon returned from inspecting the landed rocket. He told us "it is in such good shape, we could re-fuel her and send her up again!" So very little "re-furb" would be required - that was the whole goal.

The next day, however, Elon told reporters that he probably will NOT re-launch the Falcon 9, only because of its "historical signifigance." He probably wants to save her for a museum etc.
Reply  |  Post Message  |  Messages List  |  Start a Board
<<   <   Page 2 / 2
Editors' Choice
Hot Topics