5 comments
Comment Now
Advertising didn't always treat IT professionals with much respect, but that's changing. Hapless techies are out; superhero product placements are in. 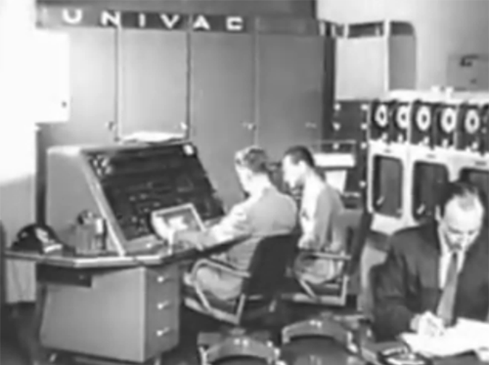 UNIVAC
This UNIVAC TV commercial, which aired on CBS in February 1956, is one of the first on-camera appearances of IT professionals. Among the first computers sold commercially, the UNIVAC was manufactured by Remington Rand and later the Univac division of Sperry Rand. Notice the three no-nonsense, heads-down programmers, working with paper printouts. Like every other male office worker in the 1950s, thin ties and jackets were the mandatory uniform. Also notice the cool animation in this early ad:

Although it was a FedEx 30-second commercial, the depiction of a stereotypical IT subject matter expert (Carl the best presentation guy) was hilarious.  Going back to late '09 or early '10, who remembers these lines?  "Wait, you didn't actually bring Carl with you..."  Now picture Carl seated in the client's conference room saying, "Good morning!  But I digress..."  As a former programmer, I found that clip especially amusing.
Reply  |  Post Message  |  Messages List  |  Start a Board

I really liked the Windows vs Mac commercials.  I enjoyed the idea that folks working at Microsoft were uptight and serious in comparison to Apple.  By looking at all the TV ads, there are some stereotypes that never die.
Reply  |  Post Message  |  Messages List  |  Start a Board

I would have agreed with you until late last year when I managed to go to work wearing one year old grass stained tennis shoe and one of my brand new tennis shoes. And didn't even notice until about 11am that morning.

But they looked good under my fluorescent lighting in my office.....
Reply  |  Post Message  |  Messages List  |  Start a Board

Thank you! I haven't worked under flouresscent lights in years.
Reply  |  Post Message  |  Messages List  |  Start a Board

This doesn't really fit your slideshow because it was a technology, not technologists, but I always thought Sprint did a great job of selling fiber optic networks with its "Pin Drop" commercials, back in the 1980s.