After a long period of development, Tesla is finally ready to show the world its latest electric vehicle, the Model X SUV.

Electric car manufacturer Tesla Motors took the wraps off its latest product, the Model X, a sport utility vehicle that features advanced safety features and Falcon Wing doors, and boasts seating for up to seven passengers.

Model X owners can expect to travel up to 257 miles on a charge in a base Model X 90D, although that drops down to 250 with the Model X P90D, which sprints from 0 to 60 in just 3.3-seconds, according to the US Environmental Protection Agency.

During a grand unveiling outside of the company's factory in Fremont, Calif., CEO Elon Musk, drew attention to the car's safety features, which he said are the most important aspects of any vehicle.

The floor-mounted battery lowers the center of gravity so that the risk of rollover is almost nonexistent, and the battery structure strengthens the vehicle against side impact intrusions. 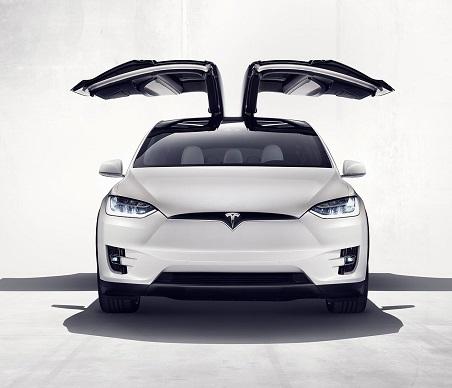 The filter can operate in three modes: Circulate with outside air, re-circulate inside air, and a James Bond-like bioweapon defense mode, which creates positive pressure inside the cabin to protect occupants.

The outside of the vehicle resembles many of the other slightly bulbous, aerodynamic SUVs on the mark, eschewing the traditional boxy design of older models for a more high tech and futuristic aesthetic.

In fact, Tesla claims the Model X's drag coefficient is 20% lower than the next-best SUV, which contributes to the vehicle's extended range, and is aided by a an active spoiler that deploys to one of three preset positions when Model X is in motion.

The most eye-catching feature is what Tesla calls Falcon Wing doors: Requiring only a foot of clearance, the doors articulate up and out of the way, allowing passengers to enter from both front and rear directions.

Aside from the articulated, DeLorean-style doors, the other dominant design feature is a massive glass panoramic windshield that features optimized solar tinting and an obstruction-free view for both driver and passengers.

On the inside, the Model X is available in six-seat and seven-seat interior layouts, and features tons of storage, including a large front trunk (large enough to hold two golf bags), a rear cargo area with enough room for large items like bicycles, skis and snowboards, and space under the passenger seats.

On top of that, the Model X is packed with creature comforts and high-tech features, including maps and navigation with real-time traffic updates, automatic keyless entry, power-folding heated side mirrors, and GPS enabled Homelink.

The company's mission is to accelerate the world's transition to sustainable transport, Musk reminded in the audience in his opening remarks.

"It's incredibly important that we move to a sustainable world sooner rather than later," Musk said. "And it's important to show that any type of car can go electric."

Nathan Eddy is a freelance writer for InformationWeek. He has written for Popular Mechanics, Sales & Marketing Management Magazine, FierceMarkets, and CRN, among others. In 2012 he made his first documentary film, The Absent Column. He currently lives in Berlin. View Full Bio
We welcome your comments on this topic on our social media channels, or [contact us directly] with questions about the site.
Comment  |
Email This  |
Print  |
RSS
More Insights
Webcasts
Strategies for Success with Digital Transformation
Building the SOC of the Future: Next-Generation Security Operations
More Webcasts
White Papers
From MFA to Zero Trust
All In, Online Gaming & Gambling
More White Papers
Reports
IDC FutureScape: Worldwide Digital Transformation Predictions
How IT Security Organizations are Attacking the Cybersecurity Problem
More Reports

In fact, the HEPA filter is something that I find really useful and necessary for those of us who prefer healthy environments free from pollution, bacteria, viruses, and everything else in the air which can cause health issues. I think the HEPA filter is a great and thoughtful add to the car. Smart homes have such filters as well.

I really like this feature where the battery acts as a safety mechanism that limits the car's ability to flip over. But the HEPA filter? That seems a bit unecessary. I guess the people buying these cars don't car about cost. Still, I don't see this filter being anything more than a luxury item that's not really needed.
Reply  |  Post Message  |  Messages List  |  Start a Board

I'm not a big fan of this opening system. I prefer opening doors normally.
Reply  |  Post Message  |  Messages List  |  Start a Board

One complaint I've heard about this car is that the doors are too slow to open and close, making for a bit of a frustrating experience for thos waiting to enter. Has anyone else seen much reporting of this?

Perhaps that's half the reason they're designed to start opening before you get there, so you don't have to stand around like an idiot waiting to get in.
Reply  |  Post Message  |  Messages List  |  Start a Board

Jeeze, sounds luxurious. Probably quite a bit beyond my means, but cool nevertheless. It certainly shows value on how the electric model behooves existing car designsin terms of a) those safety features and b) the added conveniences (front trunk sounds nice). Making it tip-top of the line is a smart PR move from Musk to make sure we don't hear too much backtalk from SUV enthusiasts. I wonder where this fits into Tesla's ongoing legal troubles getting their cars to market in many places - have they made any concessions on that front with the Model X?
Reply  |  Post Message  |  Messages List  |  Start a Board

I would love to see this on a drag race with the other leading cars such as Lamborghini, Bugatti. The Tesla Model S overtook Lamborghini Gallardo in the first few seconds on track.
Reply  |  Post Message  |  Messages List  |  Start a Board

Tesla Model X will change the impression we have on electric cars. The Model S did the same with a stunning long range drive and an amazing torque.
Reply  |  Post Message  |  Messages List  |  Start a Board
Editors' Choice
Hot Topics

10 IT Trends to Watch for in 2021 Cynthia Harvey, Freelance Journalist, InformationWeek,  12/22/2020
White Papers
From MFA to Zero Trust
Two-Factor Evaluation Guide
Presenting Your Cloud Security Strategy to the Board
The State of Threat Detection and Response
Universal Internet Connectivity: Reality or Myth?