Tesla CEO Elon Musk took the wraps off its highly anticipated Model 3 sedan on March 31. It's the first vehicle the company has manufactured that targets the average car-buying consumer. The company already has 115,000 preorders in.

Tesla Motors finally took the wraps of the Model 3 sedan on Thursday, March 31. It's the electric carmaker's most affordable vehicle yet, with a starting price tag of $35,000 and the ability to travel 215 miles per charge.

With a five-star safety rating, Tesla boasts the Model 3 will also be the safest car in its class. It features supercharging for long distance travel. It can seat up to five adults, and offers Autopilot safety features.

The Model 3 was unveiled during a live webcast from the company's manufacturing plant in California in front of a large and very enthusiastic audience.

Company CEO Elon Musk hosted the unveiling, touching on the importance of electric vehicle technology and its positive impact on a rapidly changing environment.

"Why does Tesla exist? Why are we making electric cars? Why does it matter? It's because it's very important to accelerate the development of sustainable transport," Musk said in his opening remarks. "This is really important for the future of the world." 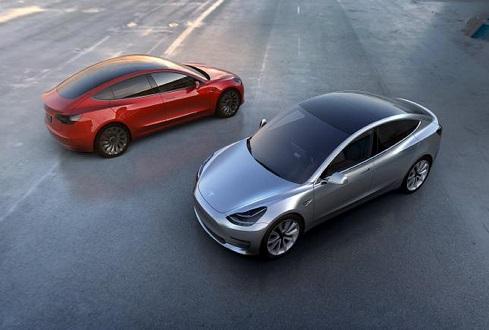 The Model 3 will also be able to accelerate from zero to 60 miles per hour in under six seconds. Musk noted there will be versions of the Model 3 that go much faster.

"We don't make slow cars here at Telsa," Musk joked, to laughter and applause from the audience.

In order to provide more space for the five passengers inside, the company also moved the front seats forward and included a panoramic glass roof to provide a feeling of openness. It still saved room for dual front and rear trunks.

"It has more luggage capacity than any gasoline car of the same dimensions," Musk noted. "Somebody recently asked me if you can fit a 7-foot-long surfboard on the inside of the car, and the answer is yes."

The major styling cue of the Model 3 is the lack of a front grille. The car doesn't need one, because there are no ventilation requirements as there are with combustion engines. It remains to be seen whether customers -- and critics -- embrace a large blank space on the front of the vehicle.

Musk also touched on the company's network of supercharging stations, which now stands at more than 3,600 worldwide, with about the same number of destination chargers.

After the unveiling of the Model 3 onstage, Musk told the audience that in the 24-hour period since preorders began Tesla received 115,000 of them.

Tesla hopes to start delivering the Model 3 to customers by the end of 2017.

"Thank you to everyone who ordered the car. We love you," Musk told a cheering crowd.

How much are all those preorders worth to Tesla? In a research note, Trip Chowdhry, managing director of Equity Research at Global Equities Research, estimates that the preorders alone at worth more than $4 billion to the company. Chowdhry also estimated that Model 3 preorders could double to 300,000 by the end of this weekend -- April 3.

"Model 3 has been designed for the iPhone generation consumer, whose lives are digitally super-centered… and competition is completely clueless," Chowdhry noted in a rather bullish report on the Model 3.

The most eye-catching feature is what Tesla calls Falcon Wing doors: Requiring only a foot of clearance, the doors articulate up and out of the way, allowing passengers to enter from both front and rear directions.

Aside from the articulated, DeLorean-style doors, the other dominant design feature is a massive panoramic glass windshield that features optimized solar tinting and an obstruction-free view for both driver and passengers.