The Future According to Microsoft

The BrainYard - Where collaborative minds congregate.
Venkatesh Rao
Contributor
January 22, 2009
Two quotes immediately flashed across my mind as I started reading Listening to the Future by Dan Rasmus, a key soothsayer at Microsoft, and Rob Salkowitz, a free ranger in the Microsoft ecosystem who occasionally wanders further afield. The first is a Kant quote: we see not what is, but who we are. The second is due to Alan Kay, a big name in the hoary past of my employer, Xerox: the easiest way to predict the future is to invent it. Looking out and ahead at the future is as much a synthetic and introspective act as it is a predictive act, even if you don't explicitly set out to introspect or synthesize. Microsoft's visions of the future merit some belief simply because the vast energies of that 600 lb gorilla, channeled by those visions, might be sufficient to bring them about. Goliaths win more often than we suspect, because Goliath beating David doesn't make the news. For you and me, this book is vastly more interesting for what it reveals about the strategic culture at Microsoft than for what it reveals about the future (which is interesting enough in its own right though). If Rasmus' views are representative, and I believe they are, here's the radar with which Microsoft is operating (this is a rough copy of a figure in the book): 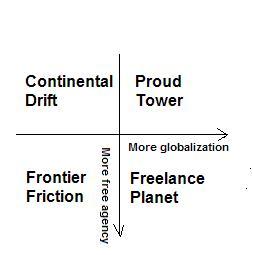