The BrainYard - Where collaborative minds congregate.
Venkatesh Rao
Contributor
January 15, 2009
Remember the last page of the Internet? That was a joke that worked on many levels. We all know how the Web 1.0 story really ended and where the real last page was. We discovered in the minimalist Google homepage that search, rather than content, was the real star of Web 1.0. That search could reconstruct advertising around clicks rather than impressions. The main Google homepage was the real last page of Web 1.0, as I'll explain. By definition, it was also the first page of Web 2.0. The trajectory of Web 2.0 has now run through a similar course. While no worthy joke page has emerged, it is now clear what the real last page of Web 2.0 is. Take your best guess before you read further.Here's the answer:

If you guessed right, treat yourself to a cookie. If you just said 'Twitter' without specifying the public timeline, you get nothing. Let me tell you why this is the Last Page of Web 2.0, and how, as a result of 20/20 hindsight, we can finally come up with a solid definition of Web 2.0. Read on. Warning, some philosophy required. If you don't like philosophy, go away.To understand why the Twitter public timeline is the logical end point of Web 2.0 you must simultaneously try to understand why the Google homepage plays that role for Web 1.0. Here's a picture of the philosophical relationship between Google and Twitter. For those new to the concept, Yin and Yang -- the fish-like halves -- represent (in my favorite interpretation) the principles of contemplation and action. Each is an unstable state, and contains within it the seed of its own destruction and the birth of the other (the 'eye'). Cyclically, the seed-eyes grow and subsume the fish, and the whole thing becomes a dynamic dance. We'll see how this gets to the Tao of Twitter within a larger explanation that also explains Google search. A clue about the relationship: the fundamental question the Google homepage poses is what do you WANT to do? The fundamental question Twitter poses is what ARE you doing? The seed-of-Twitter within Google is the results page. The seed-of-Google within Twitter is the tweet box. 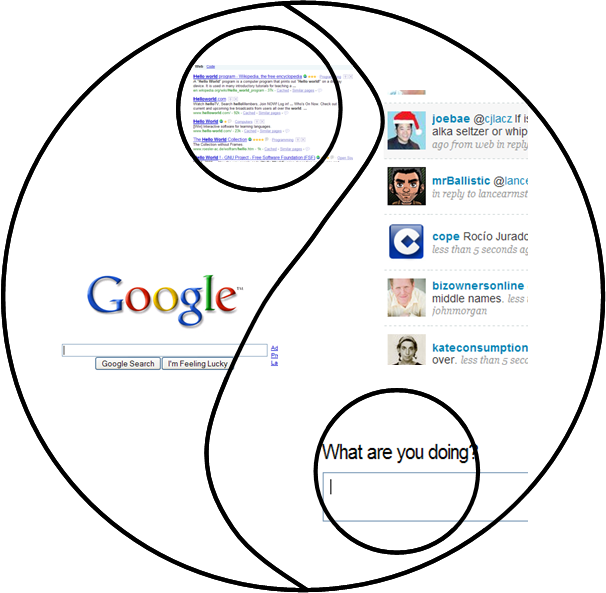 The Ultimate 1.0 Question: What do you want to do?To understand this Yin-Yang picture applied to the Web, ask yourself why did search win Web 1.0? Was it merely the quantity of information being created? Information overload? Not quite. Search wins because it represents the core question that applies to discretionary attention: what do you want to do? Search won because it aggregated a supply of a valuable and scarce commodity: discretionary attention. Directories like Yahoo tried to shoehorn discretionary attention down available paths. Portals like MSN and interrupt ads tried to tempt it down distracting paths. Google's stark and inviting box, by contrast, invited you to discover your own intentions in the most elemental way -- with keywords -- and then optimized to death the process of helping you refine them. The key word is discretionary. You normally approach Google with a vague I'll-know-it-when-I-see-it proto-intention. With a politely insistent and repeated question, what do you want to do? Google ultimately helps you discover and recognize your own intentions by looking at the results of others intentions.The better defined the intentions that create attention supply, the less Google can help you. Googling for fun is easier than Googling for work. Googling fuels free association better than it fuels analysis. For satisfying idle curiosity and a need for stimulation, Google rules.Take this line of thinking to its logical conclusion, and you understand why Google researchers have found that while users rarely click the I am feeling lucky button, they still want it there. The button represents the spirit of unfocused but restless curiosity.Take a step back and understand what this means. Staring at the emptiness of the Google search box is the ultimate meditative experience. Even a whisper of mental restlessness, the slightest murmur of curiosity, just one word in your awareness associated with sleeping intentions, is enough for Google to take you down a rabbit trail into action. Google is the last page of Web 1.0 because the day you exhaust your curiosity and are able to stare at it without any keyword popping into your head, is the day you've achieved Information Nirvana. Pure awareness/emptiness isn't as complex as the Zen monks make it out to be. It is discretionary attention that responds to the polite call of the search box, what do you want to do? with silence. The moment you break that silence, Google takes you down a path towards information, intentions, actions and eventually creation -- Web 2.0. This is the unstable-eye part of the yin-yang dynamic.So the idealized Web 1.0 user faced with the Google home page is in a state of pure but unstable contemplative awareness, with no intentions at all. That's the left half of the Yin-Yang diagram. Duals define each other. The empty-box Google home page defines its dual, the firehose that is the Twitter public timeline, the flood of human action and striving. It is no accident that when you do type in something and hit the Search button on Google, the results page looks eerily similar to the Twitter public time-line: a frozen snapshot of fragments of others thoughts.The Ultimate 2.0 Question: What are you doing?Twitter catches you at the opposite end of your existential spectrum. In the heat of action, when you are as far away from contemplation as it is possible to get, Twitter invites you to introspect, what are you doing? Almost nobody literally tweets out a constant stream of commentary about their active, full-steam intentions. Yet, Twitter really is about observing and reflecting on what you are doing. Authentic and engaging tweets emerge from what you are doing, not from what you want to say.How do authentic tweets work? They work by drawing just the teeniest bit of attention away from your situation awareness around something else you are actively doing. You bleed away just a tiny bit of the momentum of action and use it to fuel a millisecond of contemplation. Most experienced Twitter users keep it in the background. A stream of collective action-consciousness that washes over you. When they tweet, the tweets arise naturally as interesting fragments associated with doing.The natural mode of engagement with Twitter is continuous partial attention, and it is not a pathology. Devoting your full attention to Twitter is what's pathological, and the most obnoxious Twitter users can be spotted by their direct, head-on attention to it.The less you question why you are doing what you are doing, the less you need twitter. The stream of fragments of others' thoughts will wash right over you, and you will not tweet. In the extreme case of complete unquestioning absorption in your work, twitter will disappear from background view. You will respond to Twitter's what are you doing? with silence. Pure work has no spare energy to contemplate itself.But should you have even the slightest doubt about your actions, the associated seed of contemplative energy can show up as a tweet. It can snowball into questioning, conversation, debate and full-fledged braking of action, leading to a full stop, and a return to Google to find a new Life (or Lunch Hour) Purpose.The Google search experience starts with talking, saying a single word, and then listening. The Twitter experience though, starts with listening, and then moves to talking. Something in the background stream of tweets arrests a tiny drop of attention that was not being devoted to your work. Why did that tweet with a link about Britney Spears or Cloud Computing make it to your awareness? Distraction is born of little seeds of doubt, the lack of full engagement. And it is a good thing. Action that lacks the power to stop itself is a dangerous thing. Braking begins with a single tweet.Web 2.0 Defined, ReallyBut wait, we haven't said a word about 'social' or 'collaboration!' What about the commonly accepted question that is supposed to frame Web 2.0? Here's how I represent it:

For nearly 10 years now, we've come up with no better definition of Web 2.0 than that it has something to do with user-generated-content (UGC), online communities (OC) and rich internet applications (RIA). This is highly unsatisfactory. It is like driving around without knowing what cars are, and imagining they are "about wheels, seats and engines."Now we know. Extrapolating from their respective last pages, Web 2.0 is the Doubt-in-Action Web. Web 1.0 was the Curiosity-in-Contemplation Web. Web 2.0 isn't really the Social Web, or the Read/Write Web. You could read, write and be sociable on Web 1.0 (think USENET and bulletin boards for instance). This focus on action tells us why Twitter is the soul of Web 2.0. In Twitter, UGC, OC and RIA manifest themselves in their most elemental forms, and react to create a shared situation awareness of what the world is doing.The social part of the experience is different in 1.0 and 2.0. When we are at the contemplative end of the spectrum, what draws us to action is the output of others' actions: search results. But at the action end of the spectrum, what pulls us back into contemplation is the drag of others' contemplation: the global conversation. This works in very practical ways. Maybe your entire Twitter network is abuzz with talk of Cloud computing. That can make you question whether you are working on stuff that's on its way out, and whether you should jump over to the next new thing.We still haven't answered the big question though: why Twitter, and why the public timeline in particular? Why not YouTube? The answer is simple: at your most completely committed, it is only immersion in the full stream of the world's doubts and fears, expressed in a global conversation, that can arrest the momentum of your own commitments. Twitter expresses this in the most elemental form possible. You cannot get simpler than Twitter, though you can easily get more complex. And the public timeline represents the fullest, most visible part of the stream.The First Page of Web 3.0And that's where we should really start asking the question, what comes next? Web 3.0 is not a contest of competing trend. It isn't Second Life versus Semantic Web versus Sensor Web. It is the answer to the question: what is the entity whose first page is the Twitter public timeline?[This philosophical riff is based on concepts from a decidely less philosophical book on decision-making that I am currently writing, tentatively titled Tempo. You can sign up here to beta test the book and/or receive an announcement email when it is available, and a chance to win a free copy]
Catch up on the week's most important stories, case studies, and features affecting your IT career. Delivered each Friday.
Subscribe
More Insights
White Papers
More White Papers
Webinars
More Webinars
Reports
More Reports
Editor's Choice
November 2022 Global Tech Policy Bulletin: From Crypto Drama to Europe’s Chip Crisis
Carlo Massimo, Political Reporter and Columnist
IT’s Role in Sustainability and E-Waste
Mary E. Shacklett, President of Transworld Data
Data Strategy: Synthetic Data and Other Tech for AI's Next Phase
Jessica Davis, Senior Editor
DeveloperWeek Enterprise: Sorting Out Big Data to Empower AI
Joao-Pierre S. Ruth, Senior Writer
Hurricane Ian Cyber Disaster Recovery Pros Describe IT Amid 'Chaos'
Richard Pallardy, Freelance Writer
Two-Minute Toolkit: Optimizing E-Commerce for Black Friday
Joao-Pierre S. Ruth, Senior Writer
Quick Study: Managing and Supporting Remote Work
James M. Connolly, Contributing Editor and Writer
Big Tech Layoffs: A Flood of Talent vs the Hiring Crisis
Joao-Pierre S. Ruth, Senior Writer
Webinars
More Webinars
White Papers
More White Papers
Live Events
More Live Events
Reports
More Reports
More Insights
White Papers
More White Papers
Webinars
More Webinars
Reports
More Reports